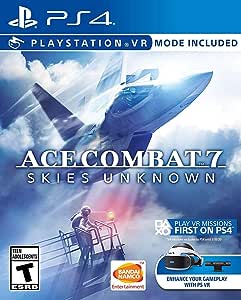 Brand: BANDAI NAMCO Entertainment
Platform : PlayStation VR, PlayStation 4
4.6 out of 5 stars 2,625 ratings
Only 4 left in stock.
Ships from and sold by Rarewaves UK.

Putting gamers in the cockpit of the most advanced war planes ever developed, Ace Combat 7: Skies Unknown delivers the fiercest air combat experience ever created through photorealistic visuals, intense dog-fighting action, a multitude of authentic and futuristic aircraft to fly, an immersive storyline, and even virtual reality! Leveraging the power of the newest generation gaming consoles, Ace Combat 7: Skies Unknown will blow players away with the evolution of its graphics engine. Beautifully rendered cloud-filled skies and highly detailed cityscapes enhance the sense of unparalleled speed and set the stage for the most engaging aerial battles in the franchise's storied 20 year history. Ace Combat 7: Skies Unknown will provide an arsenal of ultra-modern super weapons and formidable enemies that the series is known for.

4.6 out of 5 stars
4.6 out of 5
2,625 global ratings
How are ratings calculated?
To calculate the overall star rating and percentage breakdown by star, we don’t use a simple average. Instead, our system considers things like how recent a review is and if the reviewer bought the item on Amazon. It also analyses reviews to verify trustworthiness.

Marilyn Ayres
5.0 out of 5 stars Excellent graphics and involvement found in this game.
Reviewed in Australia on 15 November 2020
Verified Purchase
Yes as I have said this was an excellent purchase for me in its graphics and the games ability to involve me in it. I enjoy flying games and this one fulfils all my enjoyment in it. The audio is wonderful.
Read more
Helpful
Report abuse
See all reviews

DuneTiger
5.0 out of 5 stars Ace Combat returns with a campaign
Reviewed in Canada on 2 February 2019
Verified Purchase
IMPORTANT NOTE: A code for bonus content is not packaged with the game no matter where you buy it. The retailer (Amazon) should be sending you a code via email. The automation here is janky so if you do not receive a code, contact customer service and request that your issue be sent to the marketing team. Provided your issue gets to them properly, your code will come within hours. The code issue has no bearing on the rating of this game.
-----

After the disappointing outing of Infinity (YMMV), Ace Combat returns with a full campaign and it is gorgeous. For fans, this is the culmination of a 12-year wait and it's a no-brainer. Go get it. The story is insane as always, but welcome back to Strangereal. Those on the fence may read on.

If you've never touched an Ace Combat game, then you should know that it is not a flight sim, but an accessible arcade-style game with real-world jet fighters. No fancy peripherals are needed for this one, and the VR isn't really the point of it, as the game is easily controlled with the Dual Shock 4 that came with your system. While you can expect a little realism, part of the fun of the series has always been its loose physics model and impossible loadouts. If you weren't convinced that the game isn't a sim, I'd really like you to point to the real-world fighter that has hardpoints for 60 missiles.

AC7, for the most part, is about dogfighting and showering your enemies in a rain of missiles, leaving the skies torn apart by smoke trails. You'll pilot real-world jets that all typically have an assortment of weaponry on board to help you win the war. You'll start in an F4 Phantom and work your way up to advanced platforms like the Raptor. Flight is simplified to thrust, brake, and yaw for your shoulder buttons, and your left stick to control roll and pitch and each fighter has its own characteristics. Some feel heavier and slower, and some feel incredibly nimble. The camera can be smack right in the cockpit or in chase view behind the fighter itself without sacrificing the HUD. For the most part, the jets function exactly as you would expect them to, though some leniency with physics is involved.

The story is nonsense, but nobody really gets these games for the story - if you want to hop into some of the coolest aircraft ever invented and blast stuff out of the sky (and a few on the ground, too) without having to read a 200-page manual, AC7 fits the bill. The ultimate endgoal of AC7 is fun over everything else, and it is completely loaded with it. Even someone who knows nothing about jet fighters can still pick this up and have a good time provided they have any interest in dogfighting. There's really not much else to say about it - Ace Combat hasn't really changed its formula (except for Assault Horizon) in decades and it certainly didn't start now. It just looks a heck of a lot prettier now.
Read more
14 people found this helpful
Report abuse

Kan Chen
5.0 out of 5 stars Come on guys. Rate the game, not amazon
Reviewed in the United States on 19 January 2019
Verified Purchase
I am pissed off too. Didn't receive either AC5 nor F-4II/skins. But when people look at the rating they would thought that the game sucks... We all love the game, please don't scare away potential new fans by doing this!
Edit: I finally received my code tonight, after contacting customer service twice.
Read more
283 people found this helpful
Report abuse

Drew
5.0 out of 5 stars Incomplete, not what you pay for at first.
Reviewed in Canada on 19 January 2019
Verified Purchase
You don’t get what you paid for. It’s the bare bones game only. No Ace Combat 5, no bonus airplanes or content. Very misleading.
Update: I talked with customer service and now I’ve gotten everything I paid for. The vr is insane. It’s going to take a bit of time to get used to. It’s so good.
Read more
5 people found this helpful
Report abuse

Clinton
2.0 out of 5 stars When pigs fly
Reviewed in Canada on 30 May 2020
Verified Purchase
An absolutely terrible game. Visually is nice but it's confused between Taoism and arcade. It looks like they out the effort into giving you one hell of a flight experience. But the game play is straight up arcade. For a mission that is designated as Air to ground, you get load up your specific plane, apply all the appropriate upgrades that you fight so hard to get and okay the mission. And, who's suddenly is all about fighting drones. And EVERY LEVEL IS LIKE THIS. It is pointless to unlock lanes and upgrades if the mission is always about the stones attacking. Ridiculous and would never purchase another Axe combat... Older ace combat games had it right. This was dumb
Read more
One person found this helpful
Report abuse

No pude probar el VR porque no cuento con el dispositivo. Pero en pocas palabras vale mucho la pena.
Read more
One person found this helpful
Report abuse
Translate review to English
See all reviews
Back to top
Get to Know Us
Make Money with Us
Let Us Help You
And don't forget:
© 1996-2021, Amazon.com, Inc. or its affiliates