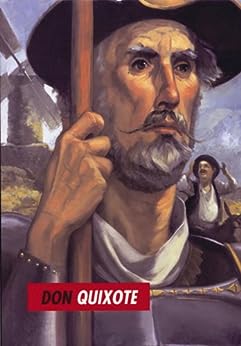 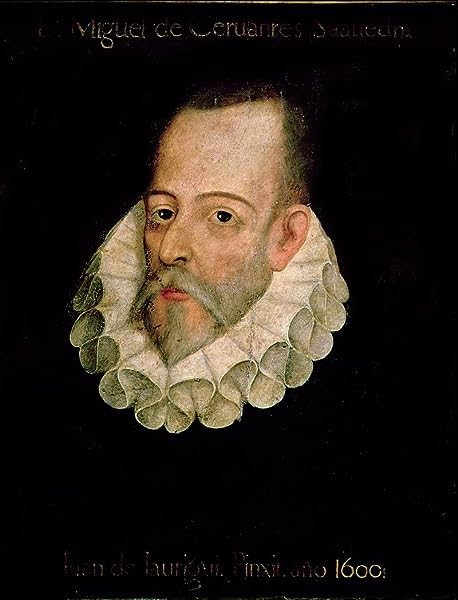 There is a story that the king of Spain once looked out a window onto the street and saw a man walking along reading a book, slapping his head and roaring with laughter. “I’ll bet he is reading Don Quixote,” the king exclaimed.

It certainly would have pleased Miguel de Cervantes if the king won such a wager, because Cervantes meant for people to laugh as they read his book. Doctors in his day believed that the cure for melancholy, a feeling of sadness that we often call depression, was to laugh out loud a lot. Cervantes also wanted readers to see that a sense of humor makes it easier to cope with life’s disappointments and people’s faults.

Besides wanting to make people laugh, Cervantes said he also wrote to rid people of their taste for romances, those fantastic stories about bold knights and fair damsels, evil giants and sorcerers, dragons and quests. But even though Cervantes said he disliked romances because they gave people foolish ideas, it is clear he was fond of them himself.

Romances tried to uphold the ideals of chivalry, a medieval code of behavior for knights that gave an air of nobility and grandeur to all the unlikely events these tales told. The knights who were the stories’ heroes were tested in ordeals, most often in combat, and their success was a proof of their virtue and honor. Some who roved in search of adventure (they were called knights-errant) sought ordeals that tested just themselves. The knight’s devotion to a maiden was tested, too, to prove his self-control and patience. Thus, the more a knight suffered in love and waited to be accepted by the maiden, the more he proved his feeling was true.

That is all fine in the world imagined in a book, according to Cervantes, but try living that way in the everyday world and you’ll seem crazy. This points out the difference between a romance and a novel: a romance describes uncommon things that almost certainly couldn’t be true, whereas a novel describes ordinary things so convincingly that one believes the story actually could have happened. Some people say Don Quixote is the first modern novel because it put the events of a romance into ordinary settings, and so made their outcomes funny, and also because its main character is not a superhero but an ordinary man whom readers grow to understand and even admire.

Don Quixote is one of the most famous characters in literature. His name has become a word, “quixotic,” that means to do something foolishly impractical for the sake of a high ideal. Equally famous is his companion Sancho Panza. As Don Quixote wanders Spain thinking of himself as a storybook knight-errant, Sancho takes the role of the knight’s loyal squire. Don Quixote is idealistic and intelligent, but crazy, because he is living in the everyday world but believing it is the world of romances. He is too old and weak to be a knight-errant, but he doesn’t think so. Sancho has solid common sense and sees everyday reality clearly, but he is ignorant and willing to lie. He knows it is useless to try to reason with madmen and so he plays along, hoping to find a profit in it. Cervantes seems to wish we could mix the best qualities of this knight and squire in ourselves; then we would see our everyday selves as we truly are and still strive to be nobler and better.

Cervantes’ great novel, so wise about human nature and so loving in telling the plain truth about it, was a sensational success. It was well known even before it was printed, because his friends who had read its handwritten pages could not help sharing its funny episodes with others. Since its first publication in 1605, Don Quixote has been translated into more languages than any other book ever written except the Bible.

3.6 out of 5 stars
3.6 out of 5
16 global ratings
How are ratings calculated?
To calculate the overall star rating and percentage breakdown by star, we don’t use a simple average. Instead, our system considers things like how recent a review is and if the reviewer bought the item on Amazon. It also analyses reviews to verify trustworthiness.

Rizwan
1.0 out of 5 stars Not good
Reviewed in India on 8 February 2020
Verified Purchase
Not good story
Read more
Report abuse