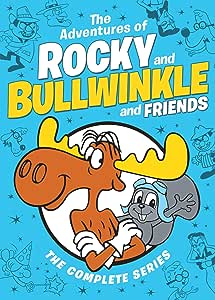 The Adventures of Rocky and Bullwinkle and Friends introduced some of the most unforgettable characters in TV history! Premiering in 1959 from Jay Ward Productions, the original series was comprised of 163 episodes featuring Rocky & Bullwinkle, Dudley Do-Right of the Mounties, Aesop and Son, Fractured Fairy Tales, Peabody's Improbable History and more. Starring Rocky, Bullwinkle, Boris, Natasha, Dudley Do-Right, Mr. Peabody and Sherman, this comprehensive collection includes every unforgettable adventure, insightful bonus features and an episode guide!

4.9 out of 5 stars
4.9 out of 5
512 global ratings
How are ratings calculated?
To calculate the overall star rating and percentage breakdown by star, we don’t use a simple average. Instead, our system considers things like how recent a review is and if the reviewer bought the item on Amazon. It also analyses reviews to verify trustworthiness.

John Hewitt
5.0 out of 5 stars Funny and politically incorrect
Reviewed in Australia on 18 October 2020
Verified Purchase
This is very funny, as a child I would come home and watch Rocky and Bullwikle but it all seems funnier. Boris and Natasha are obviously a send up of Cold War Russian spies. The other characters are funny also particularly Dudley Doright.
Read more
Helpful
Comment Report abuse

Amazon Customer
5.0 out of 5 stars Even back in the sixties camp was in!
Reviewed in Australia on 6 November 2020
Verified Purchase
Loved it! Took me back to my childhood.
Read more
Helpful
Comment Report abuse
See all reviews

Don E. Marchione
5.0 out of 5 stars Nicely Done At A Reasonable Price - Set The Way-Back Machine!
Reviewed in the United States on 13 March 2019
Verified Purchase
I recall when the show debuted in 1959. As a young kid, I watched it every afternoon but at that age did not realize that the show contained a lot of humor for adults too. So I can still enjoy it without asking myself" "Will I ever grow up?" Quickdraw McGraw also worked on both child and adult levels at times. For some reason, that show has not made it to DVD.

The entire series is here in this inexpensive set. Fortunately, the DVDs are not double-sided and the set contains a booklet that reveals on a per disc basis the contents of each show. So, if you want to get to a particular episode of Peabody and Sherman, like Ponce De Leon, it will be easy to find. The digital transfers seem just fine to me.

As an aside, I sometimes wonder how Russian viewers would react to the characters of Boris and Natasha. I hope that they laugh too. Humor is universal and often therapeutic.

This collection is a must-have for any fan of the show.

Emberweave
4.0 out of 5 stars Good collection, TERRIBLE CASING
Reviewed in the United States on 14 May 2019
Verified Purchase
This collection is very good for the price, however there are a few, minor problems. The Season Two discs are all double-sided, but I guess that was to save space since Season Two was apparently twice as long as normal. As a side note, Season Four was shorter and is only two discs. Seasons One, Three, and Five are all four-disc seasons. The main reason I've taken one star off is that the casing is ridiculously rigid and it is extremely difficult to get the discs out. There were several times where I literally gave up for fear of cracking the disc. I had to purchase some empty casings due to the same issue with a Doctor Who set (Eccleston/Tennant) but the extra box wasn't large enough to hold all the Rocky & Bullwinkle discs, so I've had to use additional two-disc cases. It is absurd that such hard casings are still manufactured. There is an episode guide booklet included which is very helpful. Assuming you can get the discs out of the box without breaking them, this is a fun show to watch.
Read more
33 people found this helpful
Report abuse

classicfilmfan
5.0 out of 5 stars CARTOONS FOR THE REST OF US
Reviewed in the United States on 30 August 2019
Verified Purchase
One of the things I love about many of the Warner Brothers cartoons, especially the later ones, is that they were clearly made for adults. Even when I watched "Rocky and Bullwinkle" as a kid, I knew that these were adult cartoons (I mean G-rated adult cartoons). Since there were several features on the show, I think we should discuss them one at a time.
1. Rocky and Bullwinkle Vs. Boris and Natasha
The main story was done like a movie serial, with one chapter at the beginning and another at the end of the show. Boris Badenov and Natasha Fatale are spies who work for a country that looks suspiciously like the old Soviet Union. The only thing thwarting their plans to take over the USA is the brilliant mind of one Rocket J. Squirrel and the not-so brilliant mind of one Bullwinkle Moose, who really has no idea what's going on during the show. Boris' boss is "Fearless Leader" (what a great name for a dictator!). He spends most of his screen time telling Badenov how stupid he is. Yet in the episode "Mechanical Munching Mice" Boris has a brilliant "fiendish plan." In those pre-cable days, practically every home had a TV antenna on the roof. So Boris created an army of huge mechanical mice with sharp teeth. Their job? To chew off every metal TV antenna in the country! As TV screens all over the nation go blank, people panic. They don't know what to do. They have long ago lost the ability to communicate with others, even members of their own family! (Of course, you might suggest that they should read a book. What are you, nuts?) As they stare at their blank screens, the entire population is easy prey for the two spies.
2. Fractured Fairy Tales. Narrated by the great Edward Everett Horton, this feature will make you wonder why any child ever read a fairy story. "Rapunzel" is a typical example. A woman has an uncontrollable desire for "rampion," some sort of flower, which grows in the garden owned by the witch next door. When her husband goes into to the garden to get some, the witch is not pleased. But she tells him he can take all he wants, as long as he agrees to give the child his wife is about to have to the witch! She names it "Rapunzel" (which is short for "rampion") and locks her up in a tower. The only way to get in the sole window is to have Rapunzel let down her incredibly long hair. The king's son, walking through the forest, sees the tower, climbs up Rapunzel's hair, and instantly falls in love. But the witch is not pleased, and throws the prince out of the tower, after pulling his hat down over his eyes. As Horton tells us, for two years the prince wandered through the forest, bumping into trees. Then, hearing Rapunzel singing, he finds the tower and meets Rapunzel again. Only he can't see.
Rapunzel: Why don't you take off your hat?
Prince (excited): I CAN SEE!
Well, that's the way things go in fairy tales.
3. Aesop and Son-I never liked this replacement for "Fractured Fairy Tales" in which Aesop and his son recreate some of his most famous stories; not very funny.
4. Bullwinkle's Corner-As Rocky explains, this is "the cultural part of our program." a celebration of famous poems. In "Little Miss Muffet," Bullwinkle plays the title role and Rocky is the spider. "Little Miss Muffet sat on a tuffet eating her curds and whey (Bullwinkle: Boy, this stuff is terrible.) Rocky is confused. What's a tuffet? Bullwinkle: It's what I'm sittin' on!
5. Mr. Peabody-Mr. Peabody is a dog. He's also a genius. All alone in his small New York apartment, Peabody decided he needed a family, so he adopted a boy named Sherman. But because there was so little for a boy to do in a tiny apartment, Mr. Peabody invented the WAY-BAC machine. Set the date and place, and you are transported there instantly (how you get back is never explained). Peabody and Sherman meet people like Napoleon, Leonardo Da Vinci, Don Juan, and Wyatt Earp. They even go to China to see Confucius, who they find working in a "Yen Arcade." "You put yen in slot, and Confucius gonna give you one of his famous sayings." Politically, it's completely incorrect, but totally hilarious.
6. Dudley Do-Right-This part of the show is a salute to our neighbor to the North (Canada, that is). Dudley Do-Right is a member of the Canadian Mounties. As such, he spends almost every waking moment trying to catch arch-villain Snidely Whiplash. There is nothing Snidely won't stoop to, from blowing up bridges to stealing money from widows and orphans. Dudley is in love with Nell Fenwick, a true-blue Canadian girl is there ever was one. This is also quite convenient, since Nell lives at the RCMP camp and is the daughter of Dudley's boss, Inspector Fenwick. The inspector speaks like Eric Blore, a British actor who spoke very slowly onscreen. This was good, because you could go to the snack bar, buy your popcorn, and return to your seat, and Blore would still be in the middle of his first sentence. You never missed any of the action!
Read more
24 people found this helpful
Report abuse

Zork
5.0 out of 5 stars Moose and Squirrel!
Reviewed in the United States on 8 August 2019
Verified Purchase
Very nice to pause the disc now and then to check the background art. There are all sorts of little details that flash by otherwise.
Hard to add what others have mentioned. The voice work of June Foray is outstanding. I just learned William Conrad ('Canon') did the narration - wow! All the others are excellent, of course. BTW, Paul Frees appears as a misguided scientist in the 1951 "The Thing From Outer Space."
So, it's great. A must-have for the nostalgic or those appreciating excellent writing and acting.
Read more
13 people found this helpful
Report abuse
See all reviews
Get FREE delivery with Amazon Prime
Prime members enjoy FREE Delivery and exclusive access to movies, TV shows, music, Kindle e-books, Twitch Prime, and more.
> Get Started
Back to top
Get to Know Us
Make Money with Us
Let Us Help You
And don't forget:
© 1996-2020, Amazon.com, Inc. or its affiliates