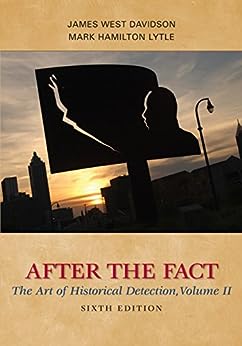 by James West Davidson (Author) Format: Kindle Edition
See all formats and editions
Sorry, there was a problem loading this page. Try again.
For more than twenty-five years After the Fact has guided students through American history and the methods used to study it. In dramatic episodes that move chronologically through American history this best-selling book examines a broad variety of topics including oral evidence photographs ecological data films and television programs church and town records census data and novels. Whether for an introductory survey or for a historical methods course After the Fact is the ideal text to introduce readers step by step to the detective work and analytical approaches historians use when they are actually doing history.
Read more
Previous page
Next page
Due to its large file size, this book may take longer to download
Kindle Fire Tablets
Free Kindle Reading Apps
See all supported devices

Mark H. Lytle received his Ph.D. from Yale University and is Professor of History and Environmental Studies. he has served two years as Mary Ball Washington Professor of American History at University College, Dublin, in Ireland. His publications include The Origins of the Iranian-American Alliance, 1941-1953, After the Fact: The Art of Historical Detection (with James West Davidson), America's Uncivil Wars: The Sixties Era from Elvis to the Fall of Richard Nixon, and, most recently, The Gentle Subversive: Rachel Carson, Silent Spring, and the Rise of the Environmental Movement. He is co-editor of a joint issue of the journals of Diplomatic History and Environmental History dedicated to the field of environmental diplomacy.

James West Davidson received his B.A. from Haverford College and his Ph.D. from Yale University. A historian who has pursued a full-time writing career, he is the author of numerous books, among them After the Fact: The Art of Historical Detection (with Mark H. Lytle), The Logic of Millennial Thought: Eighteenth Century New England, and Great Heart: The History of a Labrador Adventure (with John Rugge). He is co-editor with Michael Stiff of the Oxford New Narratives in American History, in which his most recent book appears: 'They Say': Ida B. Wells and the Reconstruction of Race. --This text refers to an alternate kindle_edition edition.

4.4 out of 5 stars
4.4 out of 5
71 global ratings
How are ratings calculated?
To calculate the overall star rating and percentage breakdown by star, we don’t use a simple average. Instead, our system considers things like how recent a review is and if the reviewer bought the item on Amazon. It also analyses reviews to verify trustworthiness.

Amazon Customer
2.0 out of 5 stars E-Book is little better than a physical scan of an actual book. It's not truly digital.
Reviewed in the United States on 19 May 2015
Verified Purchase
THIS IS NOT A KINDLE E-BOOK.

Be aware, this purchase is essentially nothing more than a scanned version of a printed book. The upshot to this is the page numbers actually mean something for citation purposes. The downside is that you lose literally all of the other benefits of an e-book. Text size doesn't scale, you can't leave notes/bookmarks easily, and the app itself doesn't do a good job of reading it.

This is a piss poor effort, and sadly typical of the textbook industry. I have dozens of $1 novels written and produced by amateurs that have better production quality than this.

The content seems solid so far, which is why this has two stars. If you have the hard-copy version of this, I expect you'll be quite satisfied. But the digital version is awful. Find an "alternative" and save yourself the money. They are available.
Read more
2 people found this helpful
Report abuse

Elizabeth Love
5.0 out of 5 stars Love it
Reviewed in the United States on 1 August 2013
Verified Purchase
I was reading over the book in my school's library that i just had to buy the book and of course it was cheaper here online.
Read more
Report abuse

Jo B. Thornton
5.0 out of 5 stars Generates Historical Thinking!
Reviewed in the United States on 2 June 2014
Verified Purchase
Great book for generating historical thinking skills in students of history, adults and teenagers alike! A marvelous resource to use in Advanced Placement U.S. History classes - every classroom should stock both Volumes I and II.
Read more
One person found this helpful
Report abuse