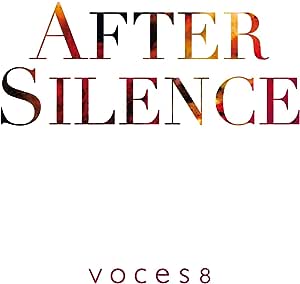 Secure transaction
Your transaction is secure
We work hard to protect your security and privacy. Our payment security system encrypts your information during transmission. We don’t share your credit card details with third-party sellers, and we don’t sell your information to others. Learn more
Details
Ships from
Amazon UK
Sold by
Amazon UK
New (5) from
$29.10 + $3.00 Delivery

'After Silence', the new self-released double-album from Voces8, celebrates the power of music and voicing the inexpressible. This unique four-chaptered album, inspired by the British writer Aldous Huxley, marks the ensemble's 15th anniversary and is a major turning point in release strategies for classical music. As communities around the world have united together through the power of singing, this album celebrates the capacity of the human voice to express our innermost feelings. A quote from Arvo Pa¨rt nestled in the booklet notes sums this up: 'The most sensitive musical instrument is the human soul. The next is the human voice. 'The choral works showcased in this project have been carefully compiled for their thematic power and inexhaustible capacity to express the inexpressible. In the essay from which the title After Silence is taken 'The Rest is Silence', Aldous Huxley offers his thoughts on the essential force of music. The most profoundly significant constituents of our being, he says, include our responses to beauty, pleasure, pain, ecstasy and death. These can best be 'experienced, not expressed' through silence, and after silence, through music.

4.8 out of 5 stars
4.8 out of 5
117 global ratings
How are ratings calculated?
To calculate the overall star rating and percentage breakdown by star, we don’t use a simple average. Instead, our system considers things like how recent a review is and if the reviewer bought the item on Amazon. It also analyses reviews to verify trustworthiness.

Serghiou Const
5.0 out of 5 stars Sublime sacred chorals
Reviewed in the United Kingdom on 8 October 2020
Verified Purchase
The compilation - 'After Silence' - was released to commemorate Voces8's fifteenth anniversary.

The two disc compilation comprise four thematic unities that voice primal experiences that have been held sacrosanct in human culture since time immemorial: 'Remembrance', invoking death, loss, and the return to earth; 'Devotion', focusing on the flames of love, sacred and secular; 'Redemption', seeking renewal and the breath of life; and 'Elemental', where the ebb and flow of nature meets the search for purity.

The compilation sets standards of excellence from its conceptualization through its implementation. The thought given to the selection of title, the exceptional quality of the liner note in both form and content, the selection of choral repertoire, employing a variety of genres and sound worlds and illuminated by a wide range of choral textures and the meticulous preparation and practice of the choir culminating in a sublime rendition generates to the listener a unique feeling of inspiration, gratification and fulfillment.

The title - 'After Silence' - was inspired from a text by Aldous Huxley: 'From pure sensation to the intuition of beauty, from pleasure and pain to love and the mystical ecstasy of death - all things that are fundamental, all things that to the human spirit, are most profoundly significant can only be experienced, not expressed. The rest is always and everywhere silence. After silence, that which comes nearest to expressing the inexpressible is music.'

A significant effort was invested in selecting individual chorals from eminent composers active between the 16th and the 21st century and include William Byrd, Claudio Monteverdi, J.S. Bach, Gabriel Faure and Arvo Part; Two beautiful chorals which are included in the concluding part of the compilation, were specifically commissioned by Voces8 and are given here their premiere recording, these are 'Vertue' composed by Jonathan Dove (2019) and 'Elemental Elegy' (2019) by the Swedish composer Marten Jansson.
Read more
2 people found this helpful
Report abuse

Scotty
5.0 out of 5 stars In a word: Bravo!
Reviewed in the United Kingdom on 26 December 2020
Verified Purchase
When I first came across Voces8 I wasn't totally convinced, mainly because in the original line-up the soprano sound seemed overly dominant. Also they didn't always perform pieces well: their Holst Nunc Dimittis for example was too fast and had insufficient dynamic range. I was also slightly underwhelmed by the first CD of theirs I bought: Lux was full of pleasant but unmemorable pastel shades and there appeared to be one or two ringers substituting for regular members of the group in the recording.

This double CD has however won me over completely. It's absolutely wonderful, containing a really interesting and diverse selection of material, beautifully sung throughout. One senses the group is reaching new heights under the now very assured direction of Barnaby Smith (their live performances of Bach's St Matthew Passion and Handel's Messiah on YouTube are simply brilliant). Very glad to have purchased.
Read more
2 people found this helpful
Report abuse

RJ
5.0 out of 5 stars Voces8 - After Silence
Reviewed in the United Kingdom on 29 August 2020
Verified Purchase
Voces8 is simply the BEST for classical choral music, but After Silence is a stand out among their work. Everything about this CD is spectacular.... the physical product is beautiful, the song selection is perfect and the singing is perfection. Highly recommended!!
Read more
4 people found this helpful
Report abuse

justsaying
5.0 out of 5 stars Sublime
Reviewed in the United Kingdom on 11 April 2021
Verified Purchase
I'm relatively late to the party, only discovering Voces8 at the end of last year whilst looking for music for a funeral. They are truly extraordinary. A marvellous blend of voices, yet each outstanding in its own right. This is a particularly good album choice including some of their best pieces from the Renaissance (Byrd) to the contempary (Whitacre) and without the unnecessary inclusion of pop, though I do realise some like the Sound of Silence et al. A lucky punt on my part and excellent value for money.

An excellent intro to this virtuosic a capella group and music which is balm to the soul at just about any time of day. Cannot wait to get to see this lot in a live performance.
Read more
Report abuse

TwoBoys
5.0 out of 5 stars Exquisite!
Reviewed in the United Kingdom on 6 September 2020
Verified Purchase
A wonderful 15th anniversary performance, well-chosen music, beautifully produced.
Read more
2 people found this helpful
Report abuse
See all reviews
Back to top
Get to Know Us
Make Money with Us
Let Us Help You
And don't forget:
© 1996-2021, Amazon.com, Inc. or its affiliates