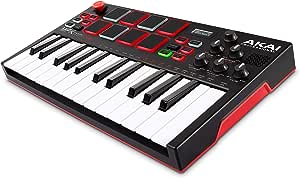 Brand: Akai Professional
4.4 out of 5 stars 2,215 ratings
Secure transaction
Returns Policy
Amazon-managed Delivery
Your transaction is secure
We work hard to protect your security and privacy. Our payment security system encrypts your information during transmission. We don’t share your credit card details with third-party sellers, and we don’t sell your information to others. Learn more
Amazon-managed Delivery
Amazon manages delivery by using preferred couriers/agents. Order delivery tracking to your doorstep is available

Simple to use and loaded with a range of “pro” features you have all you need to take your music on-the-go with MPK Mini Play. Based on the world’s most popular MIDI controller—Akai Professional’s MPK Mini and powered by 3 “AA” batteries, the MPK Mini Play is built for wireless fun, plus you can connect to a computer via USB for plug-and-play MIDI capability. Looking to practice in private or amplify MPK Mini Play? Use the audio output jack to connect headphones, external speakers and more – easy!

Ignite your performance with MPK Mini Play’s premium software suite including ProTools First, MPC Essentials, Hybrid 3 and Wobble. With these two industry-standard DAWs and virtual instruments from AIR Music Tech, you have everything you need right out of the box! Make your sound your own and take command of MPK Mini Play’s stock sounds with EQ, filter, reverb and chorus controls. Whether you’re looking to join the world of music production or seeking the ultimate tool to hammer out that killer tune on the move, MPK Mini Play is the solution you have been waiting for!

Packed with 128 sounds, its own built-in speaker, 8 backlit MPC drum pads & knobs for editing your sounds and a 4-way joystick for simple, tactile control, and you have all you need to take your music on-the-go.

Powered by 3 “AA” batteries, the MPK Mini Play is built for hours of wireless fun. You can also connect to a computer via USB port for plug-and-play MIDI capability.

Don’t want to disturb others or simply looking to amplify MPK Mini Play? No sweat! Simply use the mini-audio output jack to connect headphones or virtually any external speaker, amplifier or mixer.

Whether you’re looking to get into the world of music production, or seeking the ultimate tool to hammer out that killer lick on the move, MPK Mini Play is the solution you have been waiting for!

Whatever you set out to achieve, MPC Beats will get you started. Incorporating the finest parts of the legendary MPC workflow, MPC Beats features all the essential tools for pro production.

Edit samples, mixdown your tracks, find any sound with the synth engines found on the legendary MPCs, record audio and much more.

MPC Beats will host your AU/VST plugins so as you expand your arsenal, know you’ll have complete compatibility with industry standard virtual studio technology.

4.4 out of 5 stars
4.4 out of 5
2,215 global ratings
How are ratings calculated?
To calculate the overall star rating and percentage breakdown by star, we don’t use a simple average. Instead, our system considers things like how recent a review is and if the reviewer bought the item on Amazon. It also analyses reviews to verify trustworthiness.

Peter Lee
5.0 out of 5 stars Love it!
Reviewed in the United Kingdom on 4 January 2019
Verified Purchase
First of all, the disclaimer. I'm not a musician. I've never played a keyboard before in my life, nor have I ever produced music on a computer. I own a ukulele, which I play really badly, and that's about it.

What did I want? I fancied having a mess with a keyboard, but I wanted something small, ideally small enough to stick in my suitcase when I go travelling away with work, so not something bulky or heavy, and ideally that could run off batteries. I also wanted something that could make sounds on its own, had a speaker so I could hear what I was doing, and could also have headphones connected so I wouldn't upset my wife too much. I liked the idea of something that I could connect to my PC or laptop so I could do some fancier stuff if the mood took me. Above all else, because this would most likely be a bit of a fad for me, I didn't want to spend an absolute fortune.

It's safe to say that for me, the Akai MPK Mini Play ticks all of the boxes. The first thing you notice is that it is tiny! Powered by 3 AA batteries or by USB (more on that later) it's a dinky little thing, with 25 keys, eight drum pads, six knobs you can twiddle to mess with the sound, and 128 different keyboard sounds and ten drum kits to play with. As soon as I put the batteries in, the first thing I did was to press a key to hear what it sounded like, then turn the knob at the top to change instruments and press the same key again to hear how it now sounded, which of course I repeated 128 times much to the frustration of my wife (thank heaven for headphones!) The keyboard has a tiny built-in speaker but even on full volume, it's quiet - don't expect it to fill a room, but it's fine for sitting by yourself, tinkering away. Of course, if you connect the keyboard to a speaker with its own volume control you could make things rather louder.

On the left of the keyboard you'll find various other controls. The red joystick allows you to bend the pitch of a note, and below this the arpeggiator will play a note multiple times when pressed - you can configure the repeat interval by selecting a setting using the keys (explained in the rather skimpy manual.) There are buttons to move up or down through the octaves too. As a full sized keyboard has more than 25 keys on it, the MPK Mini Play starts out as being somewhere in the middle of a full keyboard's range, so if you press the "octave down" button you'll effectively shift to the left a bit, and "octave up" shifts you to the right. The drum pads are pressure sensitive, so the harder you tap them the louder the drum sounds, but if you press the "full level" button they sound at maximum volume no matter how hard you hit them. All in all, just with this basic functionality, it's loads of fun, and for an absolute beginner like me it's a joyous little thing to play with.

Inside the box, there's a USB cable. On the back of the keyboard you'll find a headphone socket (standard 3.5mm connector, as used on mobile phones etc.), a port for connecting a sustain / loop pedal, a USB port, and a switch labelled "USB / BATT". If the switch is in the "BATT" position, the keyboard is essentially "on" and running off battery power, so it will produce sounds using its own internal workings. If however you flick the switch to "USB" it is basically "off" and won't do anything until you connect the USB lead and plug it into a computer. Please note, the keyboard can't run off something like a USB phone charger. As soon as you plug the keyboard into a computer is is effectively "dumb", and acts as a controller for music production software. Of course, if you don't have any such software, you won't be able to use it with your computer. Thankfully, Akai have included a card inside the box with a link to register your keyboard, and then you can download some free software. The software you can get includes ProTools|First, SONiVOX Wobble, Air Hybrid, Reason Lite, and Akai's own MPC Essentials. Personally I found that MPC Essentials doesn't seem to work with the MPK Mini Play, and some of the other packages needed a PC which was at least an i5 processor to work (eg ProTools|First) so my computer wouldn't work with it, and others were for eg dubstep music production, which isn't my cup of tea, but I quite like messing with Reason Lite. Mac options are available for all of the downloadable packages, and you can also use it with Garageband apparently.

All in all, I absolutely love my MPK Mini Play. It may not be the greatest keyboard in the world, and other MIDI controllers may be better, but this one does everything I wanted it to do and more. I'm certainly happy!
Read more
55 people found this helpful
Report abuse

Chris Newman
1.0 out of 5 stars Beware: Useless with macOS Catalina and Big Sur
Reviewed in the United Kingdom on 1 October 2020
Verified Purchase
The MPK Editor software, which is required if you want to set up pad/knob mappings for GarageBand, is a 32-bit application and is therefore incompatible with recent macOS versions. It will NOT run on macOS Catalina, and will NOT work on the upcoming macOS Big Sur - and therefore will also not be compatible with the new Silicon Mac range (which cannot be downgraded) in case you were planning to get a new computer any time soon.

I have contacted Akai support and they could not say when or if the program would be updated. Given that Apple has been recommending applications have 64-bit versions since 2015 and has required it since early 2018 (and this product was only released in late 2018) I don't have much hope for that being fixed.
Read more
11 people found this helpful
Report abuse

Knoxieman
4.0 out of 5 stars Awesome little keyboard
Reviewed in the United Kingdom on 2 November 2018
Verified Purchase
Great value entry level midi controller for your studio with the added bonus of a few built in sounds and speaker, speaker sounds a bit tinny but running it on battery means you can use this anywhere, keys are a little firm as are the push buttons, works well with Cubase 9.5, lots of bundled software too check out the card inside thats loose with the manual for download link, will work with any DAW, windows 10 compatible with no drivers required.

It would have got a 5 star review if it had a sampler or sequencer, a sequencer in particular would have been an amazing feature and would have let this little keyboard wipe up most of the competition especially at this price.

I wonder how many PPL bought the MPK Mini then saw this ha ha.
Read more
11 people found this helpful
Report abuse

PK
5.0 out of 5 stars Compact and handy
Reviewed in the United Kingdom on 7 December 2018
Verified Purchase
Bought this to make music production more accessible for my kid. They can just pick it up using the on board battery power (3xAA) and on board weak, but okay speaker, which is great if you're on your own and there's no noise around (plus with a kid using it without headphones having it not too loud is a good thing).

Pads are great quality and responsive. Keys are okay for the price of what this is. In built sounds aren't mind blowing and I'm sure I heard a lot of them 25 years or so, but are fine for what this is.

Connected to the pc, this is pretty awesome and easy to move and store.

Best keyboard ever? No.

29 people found this helpful
Report abuse
Translate review to English
See all reviews
Back to top
Get to Know Us
Make Money with Us
Let Us Help You
And don't forget:
© 1996-2021, Amazon.com, Inc. or its affiliates