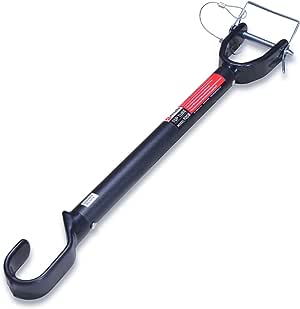 Brand: Allen Sports
4.7 out of 5 stars 5,835 ratings
Available from these sellers.

The Allen bicycle adaptor bar quickly snaps in place on most bicycles to add a top-tube so that the bicycle can be carried on a bike rack.

Dick Allen (pictured left in 1972) started Allen Sports in his garage in 1967. Since its founding, the company has been committed to producing the highest-quality, easiest-to-use bike racks and bicycle related products on the market. Dick, a onetime aerospace engineer, opened Allen Sports after building a prototype bike carrier in his Lincoln, Massachusetts shop in his free time. The first ever trunk-mounted bicycle carrier-made of electrical conduit, metal strapping, and fire hose casings (for padding) - was refined on weekend excursions to Cape Cod. Shortly afterward, Allen took his design to market, and by 1971 had established a national presence for his product.

4.7 out of 5 stars
4.7 out of 5
5,835 global ratings
How are ratings calculated?
To calculate the overall star rating and percentage breakdown by star, we don’t use a simple average. Instead, our system considers things like how recent a review is and if the reviewer bought the item on Amazon. It also analyses reviews to verify trustworthiness.

Heath Williams
5.0 out of 5 stars Gets the job done
Reviewed in Australia on 14 October 2020
Verified Purchase
Great addition, fits smaller mid size bikes also as have had issues with others being too big for the mid size frame.
Read more
Helpful
Comment Report abuse
See all reviews

Mrs. D. R. Forsyth
5.0 out of 5 stars Adjustable
Reviewed in the United Kingdom on 3 August 2020
Verified Purchase
Haven't used it yet other than to check the item fits which it does and the bicycle is now ready to put on the bicycle rack for days out in the country side
Read more
Report abuse

Pink Cats
5.0 out of 5 stars Definitely Recommend
Reviewed in Canada on 26 June 2016
Verified Purchase
Great product, easy to use although the instructions were a bit vague - but I figured it out. It does run and scratch my bike a bit like other reviewers warned, but it's totally worth it to be able to fit it on my bike rack!
Read more

9 people found this helpful
Report abuse
See all reviews
Get FREE delivery with Amazon Prime
Prime members enjoy FREE Delivery and exclusive access to movies, TV shows, music, Kindle e-books, Twitch Prime, and more.
> Get Started
Back to top
Get to Know Us
Make Money with Us
Let Us Help You
And don't forget:
© 1996-2020, Amazon.com, Inc. or its affiliates