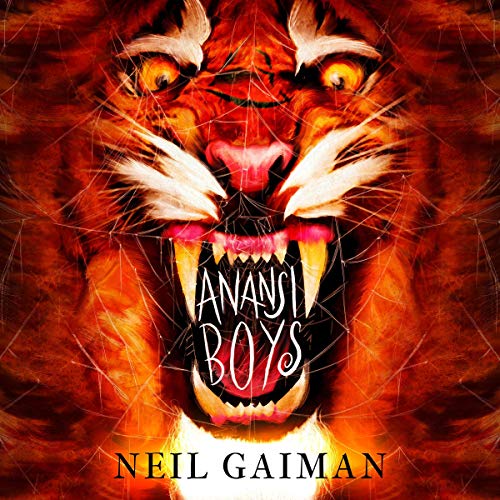 Everything changes for Fat Charlie Nancy, the South London boy so called by his father, the day his dad drops dead while doing karaoke.

Charlie didn't know his estranged father was a god - Anansi the trickster, master of mischief and social disorder. He never knew he had a brother either.

Now brother Spider is on his doorstep, about to make life more interesting...and a lot more dangerous. It's a meeting that will take Fat Charlie from his London home to Florida, the Caribbean, and the very beginning of the world itself. Or the end of the world, depending on which way you're looking.

4.6 out of 5 stars
4.6 out of 5
3,161 global ratings
How are ratings calculated?
To calculate the overall star rating and percentage breakdown by star, we don’t use a simple average. Instead, our system considers things like how recent a review is and if the reviewer bought the item on Amazon. It also analyses reviews to verify trustworthiness.

Robyn Corboy
5.0 out of 5 stars Great story
Reviewed in Australia on 30 December 2019
Verified Purchase
Loved this story! but I love Neil Gaiman's storytelling. This book was so interesting and wonderous.
Read more
Helpful
Report abuse

Amazon Customer
3.0 out of 5 stars A quick harmless read
Reviewed in Australia on 30 November 2015
Verified Purchase
It was better than Good Omens, but The Graveyard Book, The Ocean at the End of the Lane and American Gods absolutely whipped it for me.
Read more
Helpful
Report abuse

T.N
4.0 out of 5 stars Good read
Reviewed in Australia on 4 September 2014
I actually have the physical copy on my bookshelf. For the most part I liked this book. if there is any problems I have with it is just personal preference. I recommenced this to anyone.
Read more
Helpful
Report abuse
See all reviews

Craobh Rua
4.0 out of 5 stars Tricksy Spider Gods.
Reviewed in the United Kingdom on 11 July 2021
Verified Purchase
Neil Gaiman was born in Hampshire in 1960 UK, and now lives near Minneapolis. He has written novels, graphic novels and comic books. He has won multiple awards, including 4 Hugos, 2 Nebulas and 4 Bram Stokers. Amongst his novels is "American Gods," which was first published in 2001 and was adapted for television in 2017. It won a number of awards in 2002 for Best Fantasy Novel. "Anansi Boys" was first published in 2005 and - while it isn't a sequel to "American Gods" - it is, at least, a cousin.

Charlie Nancy has been living in London since he was 10 years old, after his mum walked out on his dad. He had never liked his dad, and reckoned this was the best decision she'd ever made - the pair seem to have had little in common. Charlie's father was an absolute charmer - outgoing, full of swagger and mischief, a wonderful singer and an utter charmer. Charlie, meanwhile, has no confidence in himself whatsoever. (Having grown up being called 'Fat Charlie' - thanks to his dad - can't have helped).

Charlie now lives in London and works at the Grahame Coats Agency. (They provide financial services to the rich. Coats, the boss, is an absolute crook who is swindling his clients). Charlie's engaged to Rosie, who - despite Charlie's reasonable objections - wants to invite her prospective father in law to the wedding. He agrees to search for his dad and, with the first phone call he makes, finds out that the old man has just died. He travels out to America for the funeral where he discovers that his father was actually Anansi, the trickster spider god. He also has a brother he'd known nothing about - one who has inherited at least some of his father's abilities, and is about to bring some mayhem to his life.

"Anansi Boys" was slightly different to what I had expected - a shorter book than "American Gods", lighter in tone and funnier. There's no need to read "American Gods" first - although there is a connection between the books, one doesn't follow on from the other. An enjoyable, light-hearted easily read book - certainly recommended.
Read more
4 people found this helpful
Report abuse

Philip Whiteland
5.0 out of 5 stars What a brilliant book!
Reviewed in the United Kingdom on 25 February 2018
Verified Purchase
What a brilliant book! A sort of sequel to the mighty American Gods, this is much more lighthearted and curiously Wodehousian in parts. When the Spider God Anansi (possibly the most sympathetic character in American Gods) dies, his sons are left to sort things out. No problem for Spider, who seems to have inherited the God-like qualities but it's life-chamnging in every way for Fat Charlie. Funny, life-affirming and the baddies get what's coming to them. What more could you ask for? Mr. Gaiman is rapidly becoming my new favourite autho, filling the considerable void left by the late, great, Terry Pratchett's.
Read more
14 people found this helpful
Report abuse

JustLetMeReadThisChapter
5.0 out of 5 stars A tricksy tale!
Reviewed in the United Kingdom on 21 June 2021
Verified Purchase
I love Neil Gaiman's writing. There's always something hypnotic and compelling that draws you in and it always seems so terribly effortless.

I'd read stories about Anansi the spider years ago, and Gaiman uses the old tales to spin a delectably wicked web of incredibly complex but believable design. Long story short? Fat Charlie Nancy loses his parents, gains a brother, learns about life, love and loss and lives happily ever after. Sounds simple, doesn't it? And the premise IS simple, it's just terribly Gaimanesque.

Escapism at its best.
Read more
One person found this helpful
Report abuse

WriterReader876
4.0 out of 5 stars Different take on a fantasy tale with twists
Reviewed in the United Kingdom on 14 April 2017
Verified Purchase
Another great piece of modern mythology from a fantasy master. My only reservation with Gaiman is that this is yet another hapless hero who comes good, it's a repeated motif, but definitely a different angle - Afro-Caribbean mythology.
Gaiman has such humour, so evocative of Terry Pratchett, yet also never fails to endear us to his characters. In this one, the wise, yet mercurial Afro-Caribbean ladies who are the neighbours of his father who has (allegedly) passed away, are real gems.
I love the different setting of this story, the twists, the new ground explored. There is something unexpected and ancient about African origin stories. So yes, a good read if you want something different.
Read more
9 people found this helpful
Report abuse

Pamela Scott
4.0 out of 5 stars Original and crazy
Reviewed in the United Kingdom on 5 August 2017
Verified Purchase
Anansi Boys is a good read but not exactly what I was expecting.

I loved the premise of the book, discovering your wastrel of a father is a God and you have a brother you don’t remember who’s also a God. I thought this was original.

I loved reading about Charlie’s life when Spider invades it. There are some really funny moments when Spider swans in and just takes over, seducing Charlie’s fiancée, pretending to be Charlie at work and uncovering some dodgy going’s on and generally just getting in the way.
Charlie finds Spider threatening and wants him to go away. However, it’s at this point when things really get out of control. I really enjoyed the unexpected twists and turns. The book starts to get quite dark which I wasn’t expecting at all.
Read more
5 people found this helpful
Report abuse
See all reviews