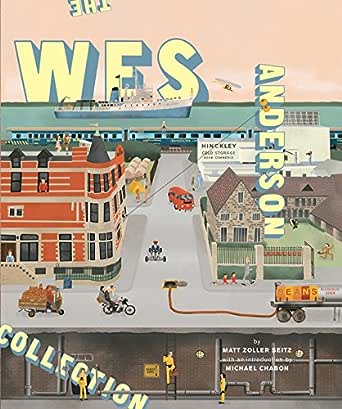 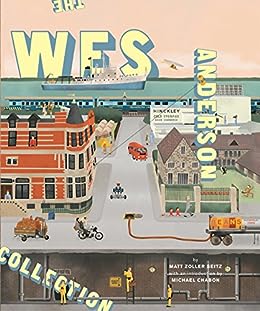 "Your coffee table wants--no, scratch that--needs this book . . . Packed with 400 images of everything from behind-the-scenes set shots to makeup inspiration to hand-drawn storyboards, the massive tome is pure eye candy. But in addition to the visuals, Seitz also dives deep into each and every Anderson film."--NYLON

"Each page of this book--filled with conversations, photographs and artwork surrounding each film--showcases Anderson's pop-culture inspirations from Hitchcock and Star Wars to Jacques Cousteau and the French New Wave. Better than most of their kind, the talks reveal a candidness and honesty between critic and director, allowing Seitz to dig around Anderson's vault and share his discoveries."--FILTER

"The Wes Anderson Collection comes as close as a book can to reading like a Wes Anderson film. The design is meticulously crafted, with gorgeous full-page photos and touches like a still representation of Rushmore's opening montage."--The A.V. Club

"Reading the book, you feel as if you're disappearing into the miniature world of Anderson's movies, like you're playing around in the files and fastidiously kept dossiers assembled for each project. In this way, the book mimics the work."--Complex.com

"It's smart, informative, and looks beautiful. In other words, it's the perfect gift."--Complex magazine --This text refers to an alternate kindle_edition edition.

Matt Zoller Seitz, a finalist for the Pulitzer Prize in criticism, is the TV critic for New York Magazine and Vulture.com, as well as the editor-in-chief of RogerEbert.com.

A Brooklyn-based writer and filmmaker, Seitz has written, narrated, edited, or produced more than a hundred hours' worth of video essays about cinema history and style for The Museum of the Moving Image and The L Magazine, among other outlets. His five-part 2009 video essay, "Wes Anderson: The Substance of Style," was later spun off into a New York Times bestselling hardcover book series: The Wes Anderson Collection (Abrams, 2013) and The Wes Anderson Collection: The Grand Budapest Hotel (Abrams, 2015).

Seitz is the founder and original editor of The House Next Door, now a part of Slant Magazine, and the publisher of Press Play, a blog of film and TV criticism and video essays. He is the director of the 2005 romantic comedy Home.

Michael Chabon is the Pulitzer Prize-winning author of many novels, the most recent being Telegraph Avenue. He lives in Berkeley, California, with his wife and four children.

Max Dalton is a graphic artist living in Buenos Aires, Argentina, by way of Barcelona, New York, and Paris. He has published a few books and illustrated some others, including The Wes Anderson Collection: The Grand Budapest Hotel (Abrams, 2015). Max started painting in 1977, and since 2008, he has been creating posters about music, movies, and pop culture, quickly becoming one of the top names in the industry.
--This text refers to an alternate kindle_edition edition.

4.8 out of 5 stars
4.8 out of 5
998 global ratings
How are ratings calculated?
To calculate the overall star rating and percentage breakdown by star, we don’t use a simple average. Instead, our system considers things like how recent a review is and if the reviewer bought the item on Amazon. It also analyses reviews to verify trustworthiness.

MsIta
5.0 out of 5 stars Just beautiful!
Reviewed in Australia on 18 July 2020
Verified Purchase
I’m a huge Wes Anderson fan and have wanted this book for a very long time. I’m so happy that I finally got it. Such attention to detail and so be beauftifully curated. It is such a well done tribute to the work of a genius.
Read more
Helpful
Report abuse

UK Mum!!
5.0 out of 5 stars Good service, delivery very quick!
Reviewed in Australia on 31 December 2020
Verified Purchase
My son was very happy with this book which made me happy as he couldn't come home to the UK for Christmas!!
Read more
Helpful
Report abuse
See all reviews

Tom
5.0 out of 5 stars Brilliant piece for any Wes Anderson fan.
Reviewed in the United Kingdom on 4 March 2020
Verified Purchase
Fantastic illustrations, brilliant coffee table book. It’s got some weight to it. Worth every penny.
Read more

5.0 out of 5 stars Brilliant piece for any Wes Anderson fan.
Reviewed in the United Kingdom on 4 March 2020
Fantastic illustrations, brilliant coffee table book. It’s got some weight to it. Worth every penny.
Images in this review

thomas gillespie
5.0 out of 5 stars A must have for Wes Anderson fans.
Reviewed in the United Kingdom on 25 March 2020
Verified Purchase
Great book providing a window to the world of Wes Anderson. A must have for fans of his films or fans or design.
Read more
One person found this helpful
Report abuse

E.T
5.0 out of 5 stars Great buy!
Reviewed in the United Kingdom on 28 May 2018
Verified Purchase
This is a great book! I plan to buy a second copy. As a warning, this is quite a large and heavy book. I travelled abroad with this book and it added significant weight to my luggage.
Read more
One person found this helpful
Report abuse

Mr. PE Scrivens
5.0 out of 5 stars Just what was needed
Reviewed in the United Kingdom on 7 January 2019
Verified Purchase
A Christmas present that went down very well with the recipient. A most interesting and well presented book.
Read more
One person found this helpful
Report abuse

Ellie B
5.0 out of 5 stars Best book to give you a look into Wes ' incredible mind
Reviewed in the United Kingdom on 24 December 2018
Verified Purchase
What a great book. For anyone who wants to take a peek into this director's great mind!!!
Read more
One person found this helpful
Report abuse
See all reviews
Get FREE delivery with Amazon Prime
Prime members enjoy FREE Delivery and exclusive access to movies, TV shows, music, Kindle e-books, Twitch Prime, and more.
> Get Started
Back to top
Get to Know Us
Make Money with Us
Let Us Help You
And don't forget:
© 1996-2020, Amazon.com, Inc. or its affiliates