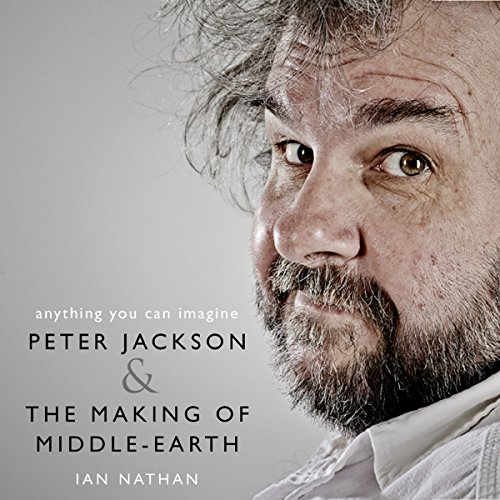 Anything You Can Imagine: Peter Jackson and the Making of Middle-earth

The definitive history of Peter Jackson’s Middle-earth saga, Anything You Can Imagine takes us on a cinematic journey across all six films, featuring brand-new interviews with Peter, his cast and his crew. From the early days of daring to dream it could be done, through the highs and lows of making the films, to fan adoration and, finally, Oscar glory.

A nine-year-old boy in New Zealand’s Pukerua Bay stays up late and is spellbound by a 60-year-old vision of a giant ape on an island full of dinosaurs. This is true magic. And the boy knows that he wants to be a magician.

Fast-forward 20 years, and the boy has begun to cast a spell over the filmgoing audience, conjuring gore-splattered romps with bravura skill that will lead to Academy recognition, with an Oscar nomination for Heavenly Creatures. The boy from Pukerua Bay with monsters reflected in his eyes has arrived, and Hollywood comes calling. What would he like to do next? 'How about a fantasy film, something like The Lord of the Rings?'

The greatest work of fantasy in modern literature, and the biggest, with rights ownership so complex it will baffle a wizard. Vast. Complex. Unfilmable. One does not simply walk into Mordor - unless you are Peter Jackson.

Anything You Can Imagine tells the full dramatic story of how Jackson and his trusty fellowship of Kiwi filmmakers dared take on a quest every bit as daunting as Frodo’s and transformed JRR Tolkien’s epic tale of adventure into cinematic magic, and then did it again with The Hobbit. Enriched with brand-new interviews with Jackson, his fellow filmmakers and many of the films’ stars, Ian Nathan’s mesmerising narrative whisks us to Middle-earth, to gaze over the shoulder of the director as he creates the impossible, the unforgettable, and proves that filmmaking really is 'anything you can imagine'.

4.6 out of 5 stars
4.6 out of 5
174 global ratings
How are ratings calculated?
To calculate the overall star rating and percentage breakdown by star, we don’t use a simple average. Instead, our system considers things like how recent a review is and if the reviewer bought the item on Amazon. It also analyses reviews to verify trustworthiness.

There are 0 reviews and 6 ratings from Australia

JP
5.0 out of 5 stars Perfect accompaniment to the trilogy
Reviewed in the United Kingdom on 12 June 2018
Verified Purchase
I could read a trilogy of books by Ian Nathan on the making of LOTR. the writing is captivating, moving you along like the briskest of thrillers.

This book perfectly captures the spirit of filmmaking that was so evident in the Appendices of the Extended DVDs and fans of those will find so much more to enjoy in this book.
Read more
6 people found this helpful
Report abuse

Shadowmike
5.0 out of 5 stars Finally a definitive account of the trials and tribulations of making a massive trilogy!
Reviewed in the United Kingdom on 4 May 2018
Verified Purchase
I've long been a fan of the Tolkein book and have read it several times. When the Jackson trilogy arrived I loved them overall and still watch the extended DVD versons seeral times a year (including the Appendices!). My one disappointment was that, apart from Sean Astin and Andy Serkis, no one had written a book about the making of.

Now that has been adressed by this publication which is a pretty definitive account of the making of the trillogy including all the studio politics and battles to even get the films made at all. I read it in two sittings, I had to sleep at some point, and found it a riveting read. If you are interested in what is involved in preparing, financing and makig a massive movie trilogy I would really recomend that you read this.
Read more
13 people found this helpful
Report abuse

Sebastian Zavala
3.0 out of 5 stars Could have been a little less biased
Reviewed in the United Kingdom on 31 January 2021
Verified Purchase
As a fan of the Lord of the Rings trilogy, I was really excited to read this book. And although I must admit it WAS an enjoyable read, I can also say it could have been better. The content itself is fascinating enough, but considering the quality of other "Making Of" books I've read, this one could have been more comprehensive, less biased, and could have included more exclusive pictures and interesting graphics.

Jackson and the cast and crew are really interesting subjects, and it was EXTREMELY revealing to read about the importance of Fran Walsh's contributions to the films. So much so, that giving the "Peter Jackson and..." title to the book ended up feeling a little insulting. And although the author is a good enough writer, some of his comments were a little too snarky (he definitely had something against other contemporary franchises, such as "Star Wars" or "Harry Potter"), or TOO positive towards Jackson (apparently he's pretty much a flawless genius... at least to him). So yeah, there was a lot to like, but at the same time, it could have been better. I hope someday we'll get a definitive "Making Of" book of these films, more similar to the equivalent publications for the "Star Wars" movies. One can hope!
Read more
Report abuse

svein pedersen
5.0 out of 5 stars A book I can’t wait to read through.
Reviewed in the United Kingdom on 25 December 2018
Verified Purchase
For a fan of Tolkien and Middle Earth and the movies done by Peter Jackson, this book is a must have item. I have read just a few pages, but I feel that this is a book that I will find it hard to just leave on the coffe table.
Read more
Report abuse

John R. Tombs
5.0 out of 5 stars Thoroughly good read
Reviewed in the United Kingdom on 8 August 2018
Verified Purchase
Bought this for myself, really good read about how Peter Jackson brought the lord of the rings to life and more.
Read more
One person found this helpful
Report abuse
See all reviews