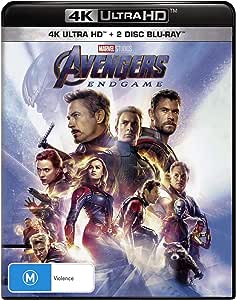 Secure transaction
Your transaction is secure
We work hard to protect your security and privacy. Our payment security system encrypts your information during transmission. We don’t share your credit card details with third-party sellers, and we don’t sell your information to others. Learn more
Details
Ships from
Amazon AU
Sold by
Amazon AU

Buy 1, get 1 free from select TV titles offered and sold by Amazon AU.
Promotion will be applied at checkout. Offer expires at 23:55 PM (AEDT) on April 30, 2021 and while stocks last. (terms and conditions apply). Click to explore.

After the devastating events of Avengers: Infinity War (2018), the universe is in ruins. With the help of remaining allies, the Avengers assemble once more in order to undo Thanos' actions and restore order to the universe.

Deals related to this item

4.6 out of 5 stars
4.6 out of 5
121 global ratings
How are ratings calculated?
To calculate the overall star rating and percentage breakdown by star, we don’t use a simple average. Instead, our system considers things like how recent a review is and if the reviewer bought the item on Amazon. It also analyses reviews to verify trustworthiness.

SeaWasp
2.0 out of 5 stars A convoluted, forgettable mess.
Reviewed in Australia on 13 February 2021
Verified Purchase
I bought this from amazon because it was just under 4 bucks and I hadn't seen it. I had purposely avoided it because of the obnoxious Brie Larson and her female Captain Marvel character. Anybody who knows their Marvel comics knows that Captain Marvel is a guy. Be that as it may, this movie plods along for almost 3 hours and after about an hour I was praying for it to finish. When it actually did finish I wanted my three hours of life AND my four bucks back. This movie is a bloated, bombastic, non-sensical, and ultimately forgettable pile of rubbish with half-Hulks, pot-bellied Thors, Hawkeye with a stupid new mullet haircut, and time travel. The good news is that I believe this movie is the end... at least for some of the original Marvel characters like Black Widow, Iron Man, & Captain America. They sure don't make movies like they used to... and that nostalgic 1940s music over the end credits made me yearn for some of the stuff from Hollywood's Golden Age when one left the cinema with a feeling of satisfaction and an evening well spent. This movie will leave you with a headache and wondering "what the hell was THAT all about?".
Read more
Helpful
Report abuse

Ronald Ostrowski
TOP 1000 REVIEWER
5.0 out of 5 stars Best of the lot
Reviewed in Australia on 6 September 2019
Verified Purchase
This had a decent storyline as well as great action. At least we did not have the forever fight scenes where cities were being trashed, and presumably thousands being killed as collateral damage. It is pure escapist entertainment after all.
Read more
One person found this helpful
Helpful
Report abuse

Scott Arbon
TOP 500 REVIEWER
5.0 out of 5 stars Great Movie
Reviewed in Australia on 15 August 2019
Verified Purchase
Great movie, one of my favourites. I bought the DVD as my TV isn't big enough to notice the difference between the formats. Go for the best quality one you will notice and budget allows for as there are some great scenes that would look better in higher quality.
Read more
Helpful
Report abuse

Al Rees
5.0 out of 5 stars Lives up to expectations
Reviewed in Australia on 9 September 2019
Verified Purchase
Endgame was a brilliant way to end some of the MCU's timelines of Ironman (Tony Stark) and Captain America, including the handing over of the mantle of the two characters. Look forward to see how Thor works with Guardians.

My only disappointment is that Avengers Endgame did not come in 3d Bluray like Infinity War.
Read more
Helpful
Report abuse

Skyliner
TOP 50 REVIEWER
5.0 out of 5 stars Awesome!
Reviewed in Australia on 3 March 2020
Verified Purchase
The climatic end to all the movies preceding it is simply amazing. Sad ending but it’s a roller coaster ride.
Read more
Helpful
Report abuse

Ron West
5.0 out of 5 stars Great Avengers Movie
Reviewed in Australia on 22 January 2020
Verified Purchase
The movie brought some surprises and sadness throughout the movie. Typical of Avengers movies, great till the end
Read more
Helpful
Report abuse
See all reviews
Back to top
Get to Know Us
Make Money with Us
Let Us Help You
And don't forget:
© 1996-2021, Amazon.com, Inc. or its affiliates