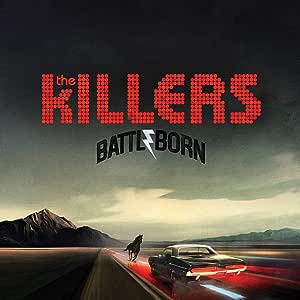 Double vinyl LP pressing. 2012 release, the fourth studio album from the iconic Las Vegas-based Alt-Rock band. The album was recorded in the band's Vegas studio of the same name, during which time they called upon a diverse list of production talent, including Brendan O'Brien, Steve Lillywhite, Daniel Lanois, Bjrk collaborator Damian Taylor and Stuart Price. Tracks that feature include ""Heart of a Girl," "Flesh and Bone" and "Carry Me Home".

4.6 out of 5 stars
4.6 out of 5
821 global ratings
How are ratings calculated?
To calculate the overall star rating and percentage breakdown by star, we don’t use a simple average. Instead, our system considers things like how recent a review is and if the reviewer bought the item on Amazon. It also analyses reviews to verify trustworthiness.

Peter Pilgrim
5.0 out of 5 stars Warm Starter to very good album
Reviewed in the United Kingdom on 27 December 2012
Verified Purchase
Immediately, the most interesting track is "Flesh and Bones" which carries on the themes of "Human" from "Day and Age". Interesting lyrics almost veering in to Bono/U2 territory. The synthesiser square wave beep at the beginning of track reminded me of the BBC Micro/ZX Spectrum games in the home computing boom of the 1980's. It an more advanced song than "Human" for the musicality inclined. There is more lyrical syncopation and vocally call-and-response in this one.

Second track is "Here With Me" which is the ballad of the album. It will be great for the travelling salesperson, or people who have romantic distance relationship. The track is very well produced and the orchestral arrangements are spot on. A great stand-out for the twenty first century and the tens beyond on doubt.

Third track for "Deadlines and Commitments". The lyrics will appeal to anybody who struggles to keep different people in their life happy, anyone who has make trade-offs in business, leisures or manages teams. The music will appeal to those who have fallen on hard times, I think; particularly those unlucky to be laid off from work, because Brandon gives you the lift to carry on.

Four track for me is a tie between "Miss Atomic Bomb" and the title track "Battle Born"; I am slightly warming to both of them. The former appeals to fellows have known a feisty maiden or two. The latter is again another anthemic strut for anyone about to go war, who trains in the gym, who wants to fight back against "The Man" (or "The System") or just wants to let rip with a safe manner behind closed down whilst pumping their fist or something.

Max
4.0 out of 5 stars The Killers release another great album
Reviewed in the United Kingdom on 18 April 2019
Verified Purchase
I’ve been in love with the killers ever since their 2004 debut ‘Hot Fuss’ and this album still contains all the Brit-pop charm that made The Killers successful in the first place. Whilst not their strongest album it is still a solid one with tracks like ‘Flesh and Bone’ and ‘Miss atomic bomb’ being the highlights. The rest of the tracks are good and a few are average but overall it makes a solid listening experience
Read more
Report abuse

A. Hayward
5.0 out of 5 stars Can't stop listening to this!
Reviewed in the United Kingdom on 16 August 2017
Verified Purchase
Best Killers album ever. I have this playing on an imaginary loop in my head, even when I'm not actually playing it. I think its a rock earworm.
Read more
5 people found this helpful
Report abuse

Kindle Customer
5.0 out of 5 stars 9 wonderful tracks, 3 good ones... great buy!
Reviewed in the United Kingdom on 29 November 2012
Verified Purchase
I'm a late convert to the Killers, hadn't even heard of them until a couple of years ago, but then Im in my mid 50's and dont often like anything that my daughter plays! Day & Age was different though and loved the album from the start, then delving back in time and finding that I liked Sam's Town even better!

Battle Born for me takes them (the killers) a step further forward, yes some of the songs are ballads...... but really good ones and really well sung and put together. There isnt really a track I dont like, which is very very rare on any album Ive ever bought, and there are 9 really great ones. My favorite is ... it varies from day to day really, but at the moment 'Heart of a Girl' is playing in my mind, but tomorrow it will be any of the others.

Fluffy
5.0 out of 5 stars THE FABULOUS FABULOUS KILLERS
Reviewed in the United Kingdom on 13 November 2017
Verified Purchase
I purchased this for friends - I already bought it immediately it was released so knew it was fabulous, as The Killers always are - after we went
to The Killers Concert is Birmingham and they loved them. This album is FABULOUS FABULOUS. Very pleased with delivery - It came
on the promised date
Read more
3 people found this helpful
Report abuse
See all reviews
Get FREE delivery with Amazon Prime
Prime members enjoy FREE Delivery and exclusive access to movies, TV shows, music, Kindle e-books, Twitch Prime, and more.
> Get Started
Back to top
Get to Know Us
Make Money with Us
Let Us Help You
And don't forget:
© 1996-2020, Amazon.com, Inc. or its affiliates