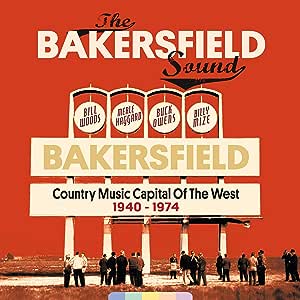 Share
Only 1 left in stock.
Add to Cart
Buy Now

Secure transaction
Your transaction is secure
We work hard to protect your security and privacy. Our payment security system encrypts your information during transmission. We don’t share your credit card details with third-party sellers, and we don’t sell your information to others. Learn more
Details
Ships from
Amazon AU
Sold by
Amazon AU
Bakersfield Sound has been added to your Cart
New (5) from
$329.37 + $3.00 Delivery

Including a large number of previously unreleased studio and live recordings, radio recordings and demos.

From hits to deep cuts to alternate takes to album tracks to live material, this set dives deeper into the Bakersfield Sound than ever before. Full-color illustrated, 220 page hardcover book with a plethora of photos, many shown here for the first time, and track-by-track commentary . In depth analysis by Grammy-nominated Bakersfield Sound historian Scott B. Bomar.

Buck Owens and Merle Haggard emerged from the dim lights, thick smoke and loud, loud music of Bakersfield, California's thriving honky-tonk scene of the 1950s and '60s and changed country music forever. But what is the ''Bakersfield Sound?'' While twanging Telecasters and crying steel guitars come to mind, the music that emanated from Central California in that era reflected a variety of influences that was expressed in myriad ways.

''We represent the end results of all the years of country music in this town,'' Haggard once remarked about the California city that served as home base for the two Country Music Hall of Fame inductees. But how did the musical world from which Buck and Merle emerged come to be? How were the twin pillars of the Bakersfield Sound shaped by the city's larger musical community? Who were their influences, and what were the musical markers along their paths to success? In what ways did their achievements reshape the local scene from which they emerged?

4.8 out of 5 stars
4.8 out of 5
23 global ratings
How are ratings calculated?
To calculate the overall star rating and percentage breakdown by star, we don’t use a simple average. Instead, our system considers things like how recent a review is and if the reviewer bought the item on Amazon. It also analyses reviews to verify trustworthiness.

Jeff-Bob
3.0 out of 5 stars Buyer Beware: Many Merle Haggard Songs are Now Gone!
Reviewed in the United States on 18 January 2020
Verified Purchase
If you read the note inside this otherwise lavish box set, you will feel my pain and anger over these last-minute Merle Haggard deletions! It states, "Due to a legal claim that was received just prior·to the release date, twelve songs have been removed from this collection." WHAT A DISAPPOINTMENT.
Read more

3.0 out of 5 stars Buyer Beware: Many Merle Haggard Songs are Now Gone!
Reviewed in the United States on 18 January 2020
If you read the note inside this otherwise lavish box set, you will feel my pain and anger over these last-minute Merle Haggard deletions! It states, "Due to a legal claim that was received just prior·to the release date, twelve songs have been removed from this collection." WHAT A DISAPPOINTMENT.
Images in this review

Steven P
5.0 out of 5 stars Awesome box set!
Reviewed in the United States on 27 October 2019
Verified Purchase
Got this box set, still working my way through the CDs. Sound quality is superb, the hard back book that comes with the set is amazing, lots of obscure photos of artist in the set, posters, records, etc. Very happy I ordered this!
Read more
8 people found this helpful
Report abuse

StaceyB
5.0 out of 5 stars Must have
Reviewed in the United States on 12 December 2019
Verified Purchase
Hesitated because of the cost and now I am so pleased with my purchase I would have spent more. The collection highlights some expected favorites and unexpected new ones that will keep me coming back for this collection long after the new purchase infatuation has worn off. Bravo Bear Family!
Read more
7 people found this helpful
Report abuse

John Eakins
4.0 out of 5 stars Sound quality superb
Reviewed in the United States on 16 December 2019
Verified Purchase
Exactly as advertised. Selections from many Bakersfield country artists from 40s to 74. I would have liked more selections from the more successful and populad, but this is really what they advertised and quality is good with over 200 songs. Pricey but has a nice book with pictures. Quality product.
Read more
4 people found this helpful
Report abuse

Fenderbender
5.0 out of 5 stars Highly recommended
Reviewed in the United States on 4 November 2019
Verified Purchase
This is amazing!!! Fire up a cigarette and enjoy these true songs of the era!! Bear Family you've done it again. Bakersfield was truly a real west coast hub for country.The book is outstanding!!! Highly recommended if you've got the bucks!!!
Read more
3 people found this helpful
Report abuse
See all reviews
Back to top
Get to Know Us
Make Money with Us
Let Us Help You
And don't forget:
© 1996-2021, Amazon.com, Inc. or its affiliates