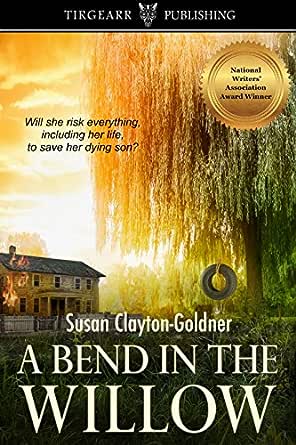 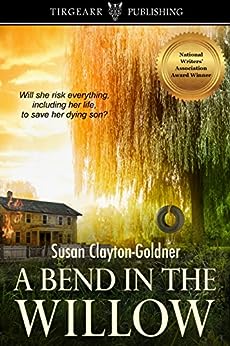 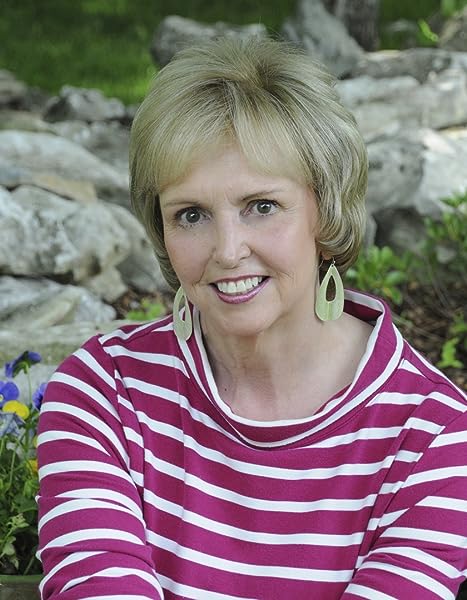 A Bend in the Willow Kindle Edition

4.8 out of 5 stars
4.8 out of 5
56 global ratings
How are ratings calculated?
To calculate the overall star rating and percentage breakdown by star, we don’t use a simple average. Instead, our system considers things like how recent a review is and if the reviewer bought the item on Amazon. It also analyses reviews to verify trustworthiness.

E.P. Clark
TOP 500 REVIEWER
5.0 out of 5 stars A Story of Hope and Healing
Reviewed in Australia on 18 January 2017
In 1965, Robin Lee Carter ran away from a life of tragedy and abuse, and reinvented herself as Catherine Henry. Twenty years later, her son is dying of leukemia and can only be saved by a bone marrow transplant from a relative. Catherine/Robin Lee has to face up to her past and reunite with her family if she has any hope of saving him.

Borrowing elements of both the thriller and the romance novel, the story alternates between three narrators: Catherine in the third person, Catherine's husband Ben in the third person, and Robin Lee's flashback memories, narrated in the first person. This use of three narrative voices could have been confusing, but it is handled skillfully, highlighting the growing divisions between Catherine and Ben, as her past comes to light, and the decreasing distance between Catherine and her younger self, as their story lines come together, finally collapsing when Catherine returns to Robin Lee's childhood home and confronts the memories waiting for her there. As the story progresses, tension--and pathos--is heightened as the central tragedy of Robin Lee's life is gradually revealed, against the backdrop of Catherine's son's worsening illness. The language is in turns lyrical and painfully raw, sometimes falling back on diction reminiscent of genre fiction as the characters struggle with their secrets, but always evoking the sights and scents of the settings: a hospital room in the pediatric oncology ward, a root cellar in rural Kentucky. This is not a light and fluffy read, even though it is not long, and the vividness of the descriptions means that readers struggling with abuse or illness may find it challenging. However, it is ultimately a story of hope and healing.

My thanks to the author for providing a review copy of this book. All opinions are my own.

CarolW
5.0 out of 5 stars Emotionally gripping
Reviewed in the United Kingdom on 22 October 2017
Verified Purchase
This book gripped me from the start and wouldn't let go. It pulled at my heart and left my emotions in tatters. I highly recommend it.
Read more
Report abuse

Kathleen Rowland
5.0 out of 5 stars I look forward to reading more from talented Susan Clayton-Goldner.
Reviewed in the United States on 18 July 2017
Verified Purchase
Catherine, her physician husband Ben, and their son Michael lead an enviable life until Michael is struck with leukemia. Catherine, now sophisticated and well mannered, doesn’t discuss her heartbreaking past and even changed her name. Ben doesn’t hide secrets like she does, but growing up, Ben tried “to define himself within his father’s tight boundaries.” Ben and his father, ashamed of their Jewish heritage, are at odds, but Catherine remembers a childhood much worse than his. Little truths come out, and Ben wonders who she really is. She says she doesn’t know how to live with something she did and could go to prison for a felony.
Michael is only five years old but is dying and needs a bone marrow transplant. Catherine tries to contact her older brother, Kyle, but he doesn’t believe she is alive. He even paid for a gravestone for her, believing she died in a fire.

Will Ben and Catherine find a way to live authentic lives? Will Catherine find a way to communicate with her brother after all these years of silence? What will happen to Catherine when the truth comes out?
I highly recommend this wonderful family saga. The emotion in the author’s writing and all the sensory associations are excellent.
Read more
3 people found this helpful
Report abuse

In A Bend in the Willow, Susan Clayton-Goldner writes a captivating tale of a strong woman’s devotion to her family and her choking guilt over a mysterious past. Through multiple viewpoints we share the emotions of the three most important characters: Catharine, aka Robin Lee, her husband Ben, and her brother Kyle.
An event when Robin Lee is seven focuses the reader on the child's fear of her drunken father as he shoves her in a trashcan in his helpless rage that another child called her, “dirty junkyard trash.” The Pologue also reveals the courage and resourcefulness of Momma as role model and Robin Lee’s close friendship with older brother Kyle.
The book is really the story of Catharine Henry the sophisticated and dedicated woman who has reinvented herself. An erly disagreement between Catharine and her husband Ben Henry, prominent physician contrasts their up-bringing. Ben would humiliate their five year old to punish him for lifting a toy sheriff’s badge, believing honesty is the most important character quality. Catharine would ”never humiliate my son.” The argument arouses Catharine’s guilt about her past and stimulates reader identity with her while increasing curiosity about her painful past.
In sharp contrast, Chapter Two shows Ben the tender father and thrusts the family into the crisis of their lives. As Ben and five-year-old Mikey head home from a sunset birthday ride, the boy’s horse spooks, stumbles, and throws the child against a tree root. The ensuing hospital visit launches the novel’s life and death struggle, for in the exam of the boy’s concussion doctors find Leukemia, a form resistant to chemotherapy.
Flashbacks show Catharine’s relationship with her family, develop a theme of hard work, and show Kyle’s protectiveness for his little sister. Kyle caught fireflies and put them in a jar for Robin Lee to allay her fear of the dark. When the doctors declare that only a bone marrow transplant will save Mikey who is suffering all the horrors of chemotherapy, Catharine realizes she must revisit her past.
Blood relatives have the best chance of a match. She reveals she had a child who would be nineteen now. Ben cannot hide his shock and sense of betrayal. Catharine tries to contact her son but runs into obstacles. She must try her only other option, her brother Kyle.
Throughout Catharine’s maneuvering, Clayton-Goldner intersperses scenes of Ben with Mikey in his exhaustion after chemo and listlessness in temporary remission. Ben researches Mikey’s disease while the frail child sleeps, holds his hand and reads to him while he’s awake. Ben sacrifices his own dream of being a medical school dean because he cannot stay with his son and do the dean’s work of a university hospital. All the while, he frets over the woman he has loved and trusted who has lived a lie.
Tension builds as Catharine returns to Willowood. Her brother put a gravestone for Robin Lee assuming she died in the fire. The scenes in this setting move from the sweetness and innocence of meeting Kyle’s child LaraLee to the painful flashback of the rape and the fire. Clayton -Goldner shows skill in the violent action remembered and the feelings of guilt and horror blending with the determination of the seventeen year old Robin Lee.
The author understands the importance of smells to emotion and memory, from the smells of the sour buttermilk in the trash can to the smells associated with her father, gasoline and whiskey most prominent.
As early as the Prologue the reader had the information that solves the final danger to Catharine. She had several times feared being charged with murder if she returned. With only one more meeting,she is ready to go home. She and Ben talk, and she packs to meet him and Mikey the next day at St. Jude’s in Memphis.
But Sheriff Preston puts a lot together,and holds Catharine overnight in jail, her only comfort a clean blanket. Catharine remembers he is a good father who has recently lost his daughter. He dashes home to do more searching.
In crafting her ending, Clayton-Goldner satisfies the reader without reliance on maudlin details.

Author Lyn G
4.0 out of 5 stars Still haunting me days after I finished reading.
Reviewed in the United States on 11 November 2017
Verified Purchase
The writing is beautiful, but the main character felt off-putting to me. I had a difficult time connecting or sympathizing. I understand why she was written this way, and know it's difficult to pull off to make her endearing while she's hiding that particular secret. Her husband, with his rigid German background, had more depth and really pulled me in.

My other problem came with the use of vernacular for the time periods (1965 and 1985). One example off the top of my head is Wayne's use of the phrase "being bummed" about something. Not in 1965. Maybe in 1975. This is only one of several instances that popped out. I wish the author had researched this more completely, as she did such a thorough job with all her other research, not an easy feat for these time periods.

The bottom line, though, is that the story is haunting and heartbreaking. I can't imagine going through what the main character suffered and coming out the other side a whole and healthy person.

Overall, I wouldn't hesitate to buy another book from this author.
Read more
One person found this helpful
Report abuse

Susan
5.0 out of 5 stars RIVITING BOOK
Reviewed in the United States on 18 April 2018
Verified Purchase
From the first page of this book I could not put it down until the end. I found myself crying at the end of story. This book describes a life of a family that was so real and believable. So hard to visualize a strong woman going through what Robin did in her early life and what was happening in her current life. The author obviously researched all aspects of this book and this made the book very authentic. It's not many authors that make you feel you know the characters so well, but I found myself feeling the pain, sorrow and good times described on the pages. I look forward to reading more books by this author.
Read more
One person found this helpful
Report abuse
See all reviews
Get FREE delivery with Amazon Prime
Prime members enjoy FREE Delivery and exclusive access to movies, TV shows, music, Kindle e-books, Twitch Prime, and more.
> Get Started
Back to top
Get to Know Us
Make Money with Us
Let Us Help You
And don't forget:
© 1996-2020, Amazon.com, Inc. or its affiliates