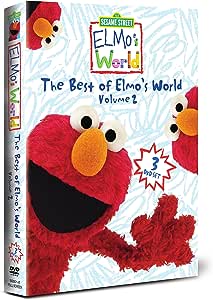 Three Elmo s World favorites together for the first time!

What is the Noodle s family dance? Can you guess what Cookie Monster gets in the mail? How many bubbles are in a whale s bath? Discover the answers in Families, Mail and Bathtime! Then join Elmo as he explores why food, water and exercise are essential parts of our life. But Elmo s discoveries are just beginning as he discovers how much fun it can be to go to school, to jump really high and to reach for the sky!

4.8 out of 5 stars
4.8 out of 5
196 global ratings
How are ratings calculated?
To calculate the overall star rating and percentage breakdown by star, we don’t use a simple average. Instead, our system considers things like how recent a review is and if the reviewer bought the item on Amazon. It also analyses reviews to verify trustworthiness.

Moose
5.0 out of 5 stars My daughter loves elmo!
Reviewed in Canada on 21 March 2014
Verified Purchase
Great product and it was delivered very quickly. The quality of the DVDs are great. My daughter loves anything to do with Elmo so she was very happy with it :)
Read more
Report abuse

marauder
2.0 out of 5 stars Good: Elmo. Bad: Unskippable advertisement
Reviewed in the United States on 15 September 2016
Verified Purchase
I had the 1st set so bought this second set. It is similar 15 minute segments of Elmo's world but this set has more issues than first one. Besides missing out the opening music for each segment which kills like (even if you play 1 movie episode instead of Play All), it comes with a long long and repetitive advertisement at the beginning which can't be skipped and I'm not sure which inconsiderate fool consider that to be a good idea on DVD for 2 year olds.

The bad:
No opening song except for 1st episode. Kids love the Elmo opening songs.
Very Long un-skipable advertisement before you can watch the episodes. Not compatible with 2 year old kids.

p.s. the advertisement is about kids in 120 learning to count with Sesame Street and then goes on listing county after country in a sentence like "Kids in Aruba are counting with Sesame Street" for what seems like 120 countries.

Kim Herndon
5.0 out of 5 stars A MUST have for Elmo's World lovers
Reviewed in the United States on 5 February 2015
Verified Purchase
My 2yr old son LOVES Elmo and when we watch Sesame Street he only ever wants to watch the Elmo's World part. I was so excited when I found Elmo's World was sold in a set and had to buy this for Christmas. It's nice that there are 3 DVDs - this way we can have one in the player ready to go downstairs, one upstairs and one to put in rotation.

Each DVD has 3 episodes of Elmo's World. While the content of the shows really holds my son's attention, I was kind of disappointed they only do the theme song at the very beginning of the DVD (before the 1st episode) so there really isn't a smooth transition from one episode to the next. Like the show ends with the song like usual (no credits) and then goes straight to Elmo talking about the next topic. Half the fun is getting to sing the intro so to only get it once for 3 episodes was a little disappointing.

Also, not sure if there is just some weird glitch in the set (and likely an issue with my player) but only 1 of them we can't get the subtitles off. So for all 3 episodes on the 1 DVD, we have to have subtitles the whole time. It's just annoying so we tend not to play that one as much.

Before getting this, my son would just ask for Elmo but now he asks for Elmo's World. Ultimately a fantastic buy and something I know we will continue watching for some time.
Read more
7 people found this helpful
Report abuse

NiNi
5.0 out of 5 stars la la la la elmos worldddd
Reviewed in the United States on 1 June 2018
Verified Purchase
My 2 year old daughter LOVED this dvd set. With primed it was at my door in 2 days. Kept her attention for a long time. she sings and dances along to the songs, could not be happier with this purchase.
Read more

6 people found this helpful
Report abuse
See all reviews
Get FREE delivery with Amazon Prime
Prime members enjoy FREE Delivery and exclusive access to movies, TV shows, music, Kindle e-books, Twitch Prime, and more.
> Get Started
Back to top
Get to Know Us
Make Money with Us
Let Us Help You
And don't forget:
© 1996-2020, Amazon.com, Inc. or its affiliates