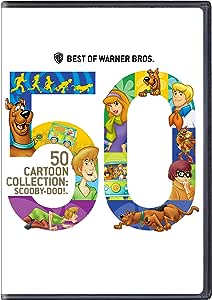 Secure transaction
Your transaction is secure
We work hard to protect your security and privacy. Our payment security system encrypts your information during transmission. We don’t share your credit card details with third-party sellers, and we don’t sell your information to others. Learn more
Details
Ships from
Amazon US
Sold by
Amazon US
New (3) from $37.32

Buy 1, get 1 free from select TV titles offered and sold by Amazon AU.
Promotion will be applied at checkout. Offer expires at 23:55 PM (AEDT) on April 30, 2021 and while stocks last. (terms and conditions apply). Click to explore.

Scooby-Doo, is on the case in this special collection. Join the many incarnations of Mystery Inc. Gang in 50 episodes spanning 50 years – from the classic series that started it all, Scooby-Doo! Where Are You!, to more recent Scooby-Doo Mystery Inc. and Be Cool Scooby-Doo!; there’s something for everyone in this Scoob-fest.

4.7 out of 5 stars
4.7 out of 5
120 global ratings
How are ratings calculated?
To calculate the overall star rating and percentage breakdown by star, we don’t use a simple average. Instead, our system considers things like how recent a review is and if the reviewer bought the item on Amazon. It also analyses reviews to verify trustworthiness.

Joel Karwatsky
2.0 out of 5 stars No episode list, AAggh!!
Reviewed in Canada on 24 November 2020
Verified Purchase
Figuring out what episodes, and from which series, are on these discs is infuriating! The episodes skip from one series to the next as you play through them on each disc.  ADD TO THIS, there is no indication anywhere in the set which episodes are included, on which DVDs, and which series they are from! I had to find another web site that had a proper list of the episodes in this set, then print it out, and put it in the DVD case.  Basically, it feels like someone at Warner Brothers had a hard drive full of Scooby Doo episodes and randomly clicked and dragged 50 of them onto a bunch of discs. This is a real hack-job.
Read more
One person found this helpful
Report abuse

Janinne
5.0 out of 5 stars Amazing Product!
Reviewed in Canada on 6 March 2020
Verified Purchase
THIS IS AMAZING!!! I love all the episodes and I enjoy the quality of each episode as well. There is nothing that I dislike about like product and I am very happy with what I received!!👍🏾💖
Read more
2 people found this helpful
Report abuse

Lee-Ann Bergwinkl
3.0 out of 5 stars Not what I was expecting
Reviewed in Canada on 14 June 2020
Verified Purchase
I was a little disappointed on the shows on this dvd. I was expecting more classic Scooby Doo and it wasn't. Didn't even watch all of them yet.
Read more
Report abuse

Leif Squires
5.0 out of 5 stars Gift for a friend
Reviewed in Canada on 13 February 2021
Verified Purchase
Bought this item for a friend for a gift and they love all the movies on it
Read more
Report abuse
See all reviews
Back to top
Get to Know Us
Make Money with Us
Let Us Help You
And don't forget:
© 1996-2021, Amazon.com, Inc. or its affiliates