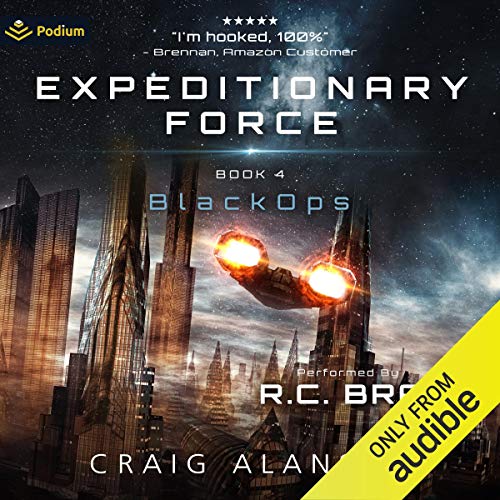 The elite crew of the pirate ship UNS Flying Dutchman had a simple mission: determining whether the Thuranin are sending another starship to Earth. Along the way, they became sidetracked by securing a future for the UNEF troops on the planet Paradise. When asked whether Earth was now safe, their ancient alien AI responded "Not so much"...now they have to deal with the consequences.

4.5 out of 5 stars
4.5 out of 5
1,487 global ratings
How are ratings calculated?
To calculate the overall star rating and percentage breakdown by star, we don’t use a simple average. Instead, our system considers things like how recent a review is and if the reviewer bought the item on Amazon. It also analyses reviews to verify trustworthiness.

Tim F.
4.0 out of 5 stars A great space opera read.
Reviewed in Australia on 25 November 2021
Verified Purchase
Fun, doesn't take itself too seriously. The female characters like virtually all books written by men these days are perfect and the men stupid, but hey hi, you can still get some enjoyment.
Read more
Helpful
Report abuse

Bob Barnes
4.0 out of 5 stars fanasy or sci fi, just love it
Reviewed in Australia on 6 June 2018
Verified Purchase
The story progresses and keeps me well and truly invested. Hard not to repeat what I have said about others of this series but its one of those you really never want to end. The element that its simply is so unlikely a plot makes it all work and its just what I enjoy being taken out of this world. Well worth the read
Read more
Helpful
Report abuse

Dan N
4.0 out of 5 stars Fun easy read.
Reviewed in Australia on 14 March 2019
Verified Purchase
Rollicking space adventure. Storyline ticks along at a pace. Not to much super science but could do with some more character development.
Read more
Helpful
Report abuse

Oliver Kluge
5.0 out of 5 stars November cannot get here quick enough!
Reviewed in Australia on 11 July 2017
Verified Purchase
I'm in love with this series of books and their incredible audiobooks. Black Ops continues the crazy adventures of the merry band of pirates.
Read more
Helpful
Report abuse

Jas P
TOP 500 REVIEWER
5.0 out of 5 stars The band is back, with a new Mission, an Elite Crew, and a Crazy AI, what could go wrong?
Reviewed in Australia on 24 October 2017
The merry band are back, well, not back, as they never really left, but Joe, Skippy and the crew are still out in space, trying to safeguard Earth from the myriad of threats that appear to getting longer every book.
This time, they are making sure that the Thuranin are not a threat to Earth, that none of them are coming back, whilst still looking for Skippy’s Elder ring, trying not to be discovered, and generally safeguarding Earth when they find little issues.
These books are funny, like if you are alone, you sit there in hysterical fits of laughter funny at some of the comments that come out of Skippy’s mouth, type funny. Of course Joe makes it easier for him, and on the odd occasion, gets his own back.
There are multiple different plots that happen in this story, and it is a bit difficult to talk about all of them without giving too much away. Needless to say, there is a lot going on in this book.
As usual, there is the continual banter between Skippy and Joe, although in this book, the banter has expanded to include some other characters as well as although it has been alluded to previously, in this book, there are more examples of Skippy and other crew interacting with each other – of course none of it is as funny and offensive as the Joe/Skippy conversations.
This time around, there was the introduction of another ‘Skippy’ type character as well. As a result of some of the stuff that Skippy has done previously, one of the Splinter minds he has created to do a task actually reaches a semi level of AI, and much to Skippy’s annoyances, starts to talk to him with a female personality. He names her Nagatha, kind of like Agatha from Agatha Christie, but she Nags more about Skippy treats the crew.
This introduction of another ‘Skippy’ type character, less intelligent, but more intelligent than most humans, is rather an interesting dynamic for the story. It certainly causes some interesting conversational arcs.
The crew find themselves in a lot of trouble when they come across a particular issue that leads to the crew taking action for the safety of Earth. These actions must remain totally off the scope though, as any suspicion of their involvement will result in catastrophic outcomes for all humanity (Both on Earth and Paradise).
As with the other stories, the adventure is a mix of hilarious humour, stunning tech (some of which is almost magical it is so far beyond the standard understanding of normal humans – it would be fascinating to know where Alanson actually got his material from), some incredible battles, both in space, on board ship, and on the ground.
For those that have read the others in the series, this is a must read. If you are new to the series, you really should go back to the start. Although the books are good, the best way to get the most out of these is still to listen to the Audio books by R.C. Bray – the combination of Alanson’s writing, and Bray’s narration is a seriously outstanding experience and is the reason that each of these books has been such a hit on Audible.
This is still a ‘drop everything and start reading/listening’ title they are so good, so don’t miss it.
Read more
One person found this helpful
Helpful
Report abuse

Wendy
5.0 out of 5 stars Another interesting quirky book
Reviewed in Australia on 10 August 2020
I am enjoying this series. Wow! Skippy! What’s going to happen next. Will “the merry band of pirates” overcome this problem? What difficulties will they encounter now?
Read more
Helpful
Report abuse

Insubson
5.0 out of 5 stars Another winner
Reviewed in Australia on 26 July 2018
Suspenseful... loved every minute of it. So much happens and I cant wait for the characters to be a little more proactive in the narrative as oppose to reactive. Will be reading the rest. Thank you for writing this.
Read more
Helpful
Report abuse
See all reviews

More Cheese Gromit?
5.0 out of 5 stars Can't wait until November for the continuing sequel . . .
Reviewed in the United Kingdom on 18 July 2017
Verified Purchase
An excellent read. I was, and still am, hooked on the exploits of the Expeditionary Force books and the Black Ops (Book 4) in the series was no exception.Have to wait until November for the next sequel in this very agreeable Science Fiction Space romp series. For new readers you simply must start from Book 1 Columbus Day. Craig Alanson had me wanting more from the very first. Can't give to much way but if you think of an Expeditionary Force from Earth going out into the vast Galaxies of the Universe to recover kidnapped humans on Paradise, Commanded by Joe Bishop, getting too involved in other Aliens (non human form) who are technologically vastly superior, backing the wrong side, at the wrong time, trying to recover the situation in order to protect Mother Earth, and to top it all off being aided by an Artificial Intelligent that has a rather unique 'mother board form and is nicknamed 'Skippy' you may get the picture. Throw in some fine humour and you have a very good read from start to finish - and you will crave the next saga sequel one as I'm doing now. Only one negative and that is Craig Alanson does tend to input too much anecdotal material just when you want to get back to the main event.
Read more
2 people found this helpful
Report abuse

ladybandit12
5.0 out of 5 stars Skippy-verse meets monkey, Monkey make good!
Reviewed in the United Kingdom on 12 June 2017
Verified Purchase
the adventures of Colonel Joe & Skippy and the rest of the merry crew of the Flying Dutchman continue in this, book 4. You have to read the series from Book 1 on chronological order (and don't miss book 3.5 Trouble in Paradise).
I gobbled up all the books as soon as i tried Book 1 and realised how clever the author Craig Alanson is with his unique way of telling the story. It really immerses you in the action, the angst, the perplexing problems that meet the space crew as they stumble through the galaxies with Skippy as their Guide/Mentor.
I guarantee you will NOT be able to put the book down!
Read more
3 people found this helpful
Report abuse

Mr Scott Williams
5.0 out of 5 stars A good forth book
Reviewed in the United Kingdom on 14 July 2022
Verified Purchase
While it the same recipe of AI not thinking up the plan and us monkeys making the unusual step to the solution this is still an exciting read and Skippy the AI is not around all the time!
Read more
Report abuse

steve
5.0 out of 5 stars ordered wrong book in series
Reviewed in the United Kingdom on 18 December 2018
Verified Purchase
meant to order book 2,but ordered book 4 instead,so i have now ordered books 2 and 3,these were recommended to me,1st book was brilliant so i know i will enjoy the next 3 ,and so on.
Read more
Report abuse

Amazon Customer DH
5.0 out of 5 stars Latest story in the seies as good as the rest.
Reviewed in the United Kingdom on 4 June 2017
Verified Purchase
further escapism, the author manages to keep the fun and witty lines going, I have enjoyed every one of the stories in this series. Keep em coming Craig :-)
Read more
Report abuse
See all reviews