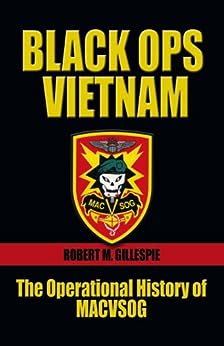 by Robert M. Gillespie (Author) Format: Kindle Edition
See all formats and editions
Sorry, there was a problem loading this page. Try again.
During the Vietnam War, the Military Assistance Command, Vietnam Studies and Observations Group (MACVSOG) was a highly-classified, U.S. joint-service organization that consisted of personnel from Army Special Forces, the Air Force, Navy SEALs, Marine Corps Force Reconnaissance units, and the CIA. This secret organization was committed to action in Southeast Asia even before the major build-up of U.S. forces in 1965 and also fielded a division-sized element of South Vietnamese military personnel, indigenous Montagnards, ethnic Chinese Nungs, and Taiwanese pilots in its varied reconnaissance, naval, air, and agent operations.

MACVSOG was without doubt the most unique U.S. unit to participate in the Vietnam War, since its operational mandate authorized its missions to take place “over the fence” in North Vietnam, Laos, and Cambodia, where most other American units were forbidden to go. During its nine-year existence it managed to participate in most of the significant operations and incidents of the conflict. MACVSOG was there during the Gulf of Tonkin incidents, during air operations over North Vietnam, the Tet Offensive, the secret bombing of and ground incursion into Cambodia, Operation Lam Son 719, the Green Beret murder case, the Easter Invasion, the Phoenix Program, and the Son Tay POW Raid. The story of this extraordinary unit has never before been told in full and comes as a timely blueprint for combined-arms, multi-national unconventional warfare in the post-9/11 age.

...Well-researched, well-written history...It is highly recommended for military professionals and enthusiasts, as well as anyone studying the conflict, SOF, or counter-insurgency operations. -- Canadian Military Journal --This text refers to the hardcover edition.

"…Well-researched, well-written history…It is highly recommended for military professionals and enthusiasts, as well as anyone studying the conflict, SOF, or counter-insurgency operations."

-- Canadian Military Journal --This text refers to the hardcover edition.

Robert Gillespie (just Bob to most people) was born in 1957, the son of a World War II and Korean Conflict veteran and a coal miner's daughter. He grew up on military bases and was surrounded by an extended family of veterans, none of whom were surprised by his unceasing interest in military history and affairs. After his own extended stint of service, he attended Clemson University and received a BA in education and an MA in history. Completing nine years of teaching at a community college, he decided to turn his hand back to research and writing on American covert operations in Vietnam.

4.5 out of 5 stars
4.5 out of 5
48 global ratings
How are ratings calculated?
To calculate the overall star rating and percentage breakdown by star, we don’t use a simple average. Instead, our system considers things like how recent a review is and if the reviewer bought the item on Amazon. It also analyses reviews to verify trustworthiness.

rick adair
5.0 out of 5 stars Very informative.A must read for those interested in special ops.
Reviewed in Canada on 3 June 2014
Verified Purchase
From the very first chapter, i was surprised at how political the process for setting up MACVSOG was. The formation of the Studies and Observation Group was less than smooth and after 50 years of waiting for information to be released, i was thrilled to learn more from Mr. Gillespie's book. A lot more went into the formation of SOG then i realized, and with his straight forward approach Mr. Gillispie has provided me with a timeline and the people involved in making SOG part of American History.
Read more
Report abuse

Evan
5.0 out of 5 stars Not what I expected by still great read
Reviewed in the United States on 25 November 2011
Verified Purchase
This book is a great read! It gives a full history and a major logistics side of the inner working of MACV-SOG. I was half expecting this book to have a little more of some of the operator's personal stories. However this book speaks more about how MACV-SOG was really stuck in the middle of everything. Carrying out secret missions and needing much capital to get the job done without discussing what was being done, how it was done, and what were the results kept MACV-SOG constantly caught between Military command, the CIA, the Pentagon, and the White House. This book is extremely well written and as a History Major I was very satisfied to see the amount of sources used and reasons behind using the sources. Its a shame that these men sacrificed so much and have been kept in the dark this whole time but that comes with the territory. But at least a good credible book is something to lean on when telling a history like this.
Read more
27 people found this helpful
Report abuse

Tom W. Cunnigham
4.0 out of 5 stars Changing times
Reviewed in the United States on 15 December 2011
Verified Purchase
I purchased this book as it is the first book, which named any U.S.Marines being involved with MACVSOG. That single piece of information had been a secret since 1964. Publicly, MACVSOG was a unit made up of U.S. Army personnel, mostly Special Forces and various other government agency 's, but no Marine Corps units were ever mentioned. I found out that one of our General's had passed away in December of last year so I imagine that was the reason our unit was included publicly in this book. We had been informed our presence was classified and would remain so. I was stunned to see our name listed as being involved with the Studies and Observation Group after all these years of anonymity. I have been reading this book slowly and making my own notes, so I have not as yet finished the book. For those that served time in Viet Nam, they may find this book interesting...for those involved during their career with SOG, I think they will be fascinated too. Semper Fi,
Read more
22 people found this helpful
Report abuse

Gordon Cucullu
5.0 out of 5 stars Thorough, Informative, Fast-Moving
Reviewed in the United States on 15 December 2013
Verified Purchase
Quick background: I was a member of SOG in 1971-72 and remained through the first months of conversion to SMSAD. SOG was a highly compartmentalized organization, with need-to-know a watchword. So even though I participated in some of the events author Gillespie recounts I was not aware of the wide range of activities going on simultaneously, and knew very little of the history. I found that the actions of which I am personally aware - for example Navy LT Tom Norris' brave mission - are accurately portrayed.
Although some reviewers have grumbled about logistics, administration, chain of command and other facets of the book, it is important to recognize that even though some SOG activities were harrowing and dangerous, that above all it was a military institution and had to plow through the necessary baggage that all such organizations do.
For solid, comprehensive reading and to provide readers the background essential to understand fully some of the more mission-focused works on SOG, Black Ops is required reading.
I highly recommend it and it shall occupy a proud place in my MACVSOG library. And should in yours, also.

Sunnyuno
4.0 out of 5 stars Great workup on MACSOG and its roots - covers the nuts and bolts completely!
Reviewed in the United States on 19 December 2012
Verified Purchase
Only demerit is that the author leaves some dates confusing by not including the year ( but but that is not a big distraction).
Very good read - especially when over laid upon history unfolding today in Afghanistan - makes you wonder why we forget so much each time around! Laos was a lousy place to play (landlocked wars always are and always will be) but our guys of today in Afghanistan (and I am focusing on SOF only here) obviously got the goods to really take the game to the bad guys this time around. We were many times surprised to find out where were when dropped off over the fence. Today teh intell and tech support affords them the best in intell and ability to really plan before climbing aboard for a hunt and peek!! God Bless them and their families for what they are achieving every day after 9/11! George W. "Sunny" Hewitt (CCS/CCN - MACSOG Recon)
Read more
9 people found this helpful
Report abuse
See all reviews
Back to top
Get to Know Us
Make Money with Us
Let Us Help You
And don't forget:
© 1996-2021, Amazon.com, Inc. or its affiliates