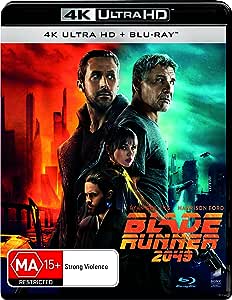 Denis Villeneuve directs this sequel to the 1982 sci-fi thriller 'Blade Runner'. Three decades after the events of the first film, replicant K (Ryan Gosling) works as a blade runner for the LAPD, under the command of Lieutenant Joshi (Robin Wright). On his latest assignment to retire an old Nexus-8 model, K discovers a secret that could shatter accepted knowledge of androids' capabilities and in turn makes him question his own purpose. In search of assistance and answers, K seeks out former blade runner Rick Deckard (Harrison Ford), but he is being closely trailed by fellow replicant Luv (Sylvia Hoeks), who has been dispatched by replicant manufacturer Neander Wallace (Jared Leto) to find what K is looking for.

4.5 out of 5 stars
4.5 out of 5
84 global ratings
How are ratings calculated?
To calculate the overall star rating and percentage breakdown by star, we don’t use a simple average. Instead, our system considers things like how recent a review is and if the reviewer bought the item on Amazon. It also analyses reviews to verify trustworthiness.

Michael B.
5.0 out of 5 stars Great movie, fantastic value.
Reviewed in Australia on 14 December 2018
Verified Purchase
Both the 4K and Blu-ray transfer of Bladerunner 2049 are beautifully transferred from the master. Well realised sequel that stands up to the original in many ways. Great service and price from Amazon as always. 10/10.
Read more
One person found this helpful
Helpful
Comment Report abuse

Jonathan
5.0 out of 5 stars Perhaps my favourite film
Reviewed in Australia on 16 June 2019
Verified Purchase
This director can do no wrong. This movie is a masterpiece in every sense of the word. The soundtrack too, is sublime.
Read more
Helpful
Comment Report abuse

A
TOP 500 REVIEWER
5.0 out of 5 stars works as it should
Reviewed in Australia on 29 July 2019
Verified Purchase
delivered in time and as described
Read more
Helpful
Comment Report abuse

Darryn Grinter
5.0 out of 5 stars Awesome Movie
Reviewed in Australia on 12 March 2019
Verified Purchase
Exactly as advertised. Amazon had ALWAYS been 100% perfect to me here in Australia
Read more
Helpful
Comment Report abuse

LaronVonBaron
1.0 out of 5 stars missing/different disc inside case no seal tape on box
Reviewed in the United States on 14 September 2019
Verified Purchase
I can't tell you how disappointed I am me and the wife put it in the very minute it showed up we've been watching for it all day we're blade runner fans from the original and we waited all this time to see it in 3-D and now we're disappointed it might be a great movie but the copy we received would not play in 3-D this is the third movie I've received from Amazon it was improperly boxed the packaging with 3-D packaging and the digital copy was there but the desk was not a 3-D disc might be a standard i'm giving it one star because I really don't know what to say its a product review not a movie review lol I hear it's a great movie but I guess this is about service ,,i ask a walmart employee about their quality problems and it seems amazon is not alone in having issues with products but they never found a wrong dvd in a blu ray case before but lots of missing digital copies and missing dvd copies.this seems like a distributor issue if you know what i mean,,,,.still amazon is the 2nd choice now for 3D bluray purchases BUT i have received 2 copies of movies many times so maybe it works out in the end lol
Read more
7 people found this helpful
Report abuse

Book Gnome
4.0 out of 5 stars Good Movie, Okay 3D
Reviewed in the United States on 16 December 2019
Verified Purchase
I didn't want to reduce my review score for a good movie due to simply adequate 3D, and kept it at 4 stars. I like 3D that really "pops", and despite some fantastic cityscapes and a lot of neon the 3D in Blade Runner 2049 is merely adequate: Natural and realistic, but only conspicuous and really noticeable in a few places. Compare the eye-candy neon city of Ghost in the Shell 3D and you'll see a significant difference. Even as an avid Blade Runner fan for several decades, I'll tell you that except for fellow completionists you can consider the 3D version entirely optional (and save a bundle in the process).

The movie itself is good, though not as good as the original Blade Runner. However, for fans of the original there are plenty of nods to watch for. There is also quite a bit of new fodder for the "Is Deckard a replicant?" bonfire. Edward James Olmos also makes an appearance--which would not be complete without yet another origami to argue about. This movie is deep, and with each watching I've noticed new details and new touches borrowed from the original. It's definitely worth getting, but doesn't have to be 3D.

lao3d
3.0 out of 5 stars Subtle if unspectacular 3D
Reviewed in the United States on 12 February 2019
Verified Purchase
Reviewing the 3D version: not the most spectacular 3D ever, but subtly immersive, which helps throughout much of the foggy murk. I found it more engaging than the 2D version.

The film starts off well but is ultimately undone by too many plot holes and “oh come on” moments. An ambitious attempt, but never reaches the same heights as its predecessor.
Read more
6 people found this helpful
Report abuse

Raphael L Ferreira
4.0 out of 5 stars Great movie, but I'd go for the 4KUHD version instead...
Reviewed in the United States on 8 October 2020
Verified Purchase
The title of my post says it all... Sacrificing 4KUHD for 3D is a no no. I've owned my 3D TV for nearly 7 years now, and I have never watched a film in 3D because I did not have a Blu-Ray player with 3D. So, I decided to go for this one now that I do have the player (should have bought that years ago). Once you switch to 3D the image noticeably turns darker, and you lose clarity and definition somewhat. Those two shortcomings combined make the 3D version of the film look like a regular mastered HD Blu-Ray, or even worse, like a well mastered DVD, depending on how keen of an eye you have. Now, the movie itself is great, as most fans would agree. I just wish they had gotten Vangelis for the soundtrack again. The franchise loses 50% or more of its allure without Vangelis at the helm of the soundtrack. Special sound effects are indeed well mastered, and I could feel fully immersed in the movie, with sound whizzing around me with my 5.1 system doing a great job playing at Dolby Digital. I would have preferred DST from experience, but Dolby Digital is nice enough. I tried switching to DTS but it is not showing as an option for my surround sound setup.
All in all, a good purchase that I do not regret paying for, but I do recommend a 4KUHD instead. Best, Raphael
P.S. Now, if they launched a 4KUHD WITH 3D, I'd be all over it..!

EDIT (10/08/20): I decided to try and adjust my TV settings to counterbalance the poor image I was seeing in 3D and, to my surprise, the 3D presentation improved simnifically! I did have to adjust several items (eg. brightness, contrast, saturation, as well as 3D depth, and many other settings), but once those were done I did see a remarkable improvement in the 3D image and now I can fully recommend this item. I hope this helps. R.
Read more
Report abuse

Christopher A. Parr
5.0 out of 5 stars Harrison Ford still in denial
Reviewed in the United States on 21 April 2020
Verified Purchase
Even though Ridley Scott insists Deckard is a (rather advanced) replicant, Harrison still plays him for fully human, insisting that he is! He even sardonically deflects that same question about his dog with “I dunno. Why’nt’cha ask him?” The film’s vision is perfect and sets up its sequel, for which I can’t wait! But I must, as it was weakly reviewed. Critics still don’t understand the prescience of Scott’s take on Phillip Dick’s original.
Read more
Report abuse
See all reviews
Get FREE delivery with Amazon Prime
Prime members enjoy FREE Delivery and exclusive access to movies, TV shows, music, Kindle e-books, Twitch Prime, and more.
> Get Started
Back to top
Get to Know Us
Make Money with Us
Let Us Help You
And don't forget:
© 1996-2020, Amazon.com, Inc. or its affiliates