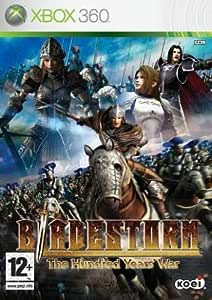 Secure transaction
Your transaction is secure
We work hard to protect your security and privacy. Our payment security system encrypts your information during transmission. We don’t share your credit card details with third-party sellers, and we don’t sell your information to others. Learn more

Fastest delivery: 23 - 27 April
Ships from and sold by Amazon US.

4.6 out of 5 stars
4.6 out of 5
18 global ratings
How are ratings calculated?
To calculate the overall star rating and percentage breakdown by star, we don’t use a simple average. Instead, our system considers things like how recent a review is and if the reviewer bought the item on Amazon. It also analyses reviews to verify trustworthiness.

Reina H. Watt
4.0 out of 5 stars Enjoyable and oddly challenging
Reviewed in the United Kingdom on 28 February 2008
Verified Purchase
I just got the game today, a few hours ago, and in just the few hours I've played it, I think I've got enough to review the game.

Bladestorm is set in the Hundred Year War between France and England, the era was really three wars and two eras of short lived peace and instigated by a claim on the throne of France by English nobles of the time. I would recommend looking up the history to get the full story, it's quite interesting.
Anyway Bladestorm is a mix of Kessen and Dynasty Warriors, it has the slamming into large armies angle of DW while having the troop and tactical concepts of Kessen.

You play as a mercerary for hire and after creating your character, the character creation options are sadly limited to just face, gender and voice - For shame, more could have been done in that area, you then go into battle after accepting a contract from whatever force you wish to fight for.
You can fight for either force depending on what contract you accept, you then command a number of troops and do your best to fulfil the contract. Sounds pretty simple, doesn't it? It is, of sorts.

The battle system is different in Bladestorm, you select the attack you'll do, depending on what style of troops you have, each type has different attacks, and if you personally want to get right into the fight, you hold down the right bumper, on the 360 pad, and I think it's the R1 button on the PS3 pad, and you fight for your life.
The sound is nice, nothing special, but functional. The controls are fluid enough, you could be forgiven for yelling out "CHARGE!" as you charge your opponent.

There's not many options in the game, just the general story mode and a few game options for sound, visual and so on. Seems a bit lacking, but oh well, maybe a sequel in another era might remedy that.
The voice acting is as bad as ever, I don't know who the developers of the DW/Kessen/Bladestorm games hire for voice acting, but they really need to get people who can actually put some feeling into their characters and can actually sound right.
There are unlockables, they are unlocked as you progress and improve. Mostly improvements to your fighting, troops and so on.

Bladestorm is a slightly different approach for the usual from Koei and their development teams, while it feels and looks the same, it plays in a new way. The new battle system takes some practice, but after a while it becomes second nature. The era the game is set in is a nice change and every bit as interesting as the Three Kingons and The Clan Wars eras.
The graphics are pretty nice, quite fluid as well, almost forgot to mention that.

If you're looking for something to enjoy, then you can't go far wrong with Bladestorm. Don't expect it to be incredible, just have fun as you play it. So it doesn't have guns and explosions, so what? Not every game needs to be a mindless FPS to be worth while, so give it a try. You might like it, you might not, you won't know till you try.
Now, it's battle time. CHARGE!
Read more
15 people found this helpful
Report abuse

K. Myers
4.0 out of 5 stars damn good game
Reviewed in the United Kingdom on 25 August 2012
Verified Purchase
I got this game a while back but ended up trading it in after I finished it, probably because it didn't hold my attention for long after since I had many other games to play. However, I have missed playing this for a long time so I decided to buy it again.

It's a really good game, the massive armies marching around the French countryside is great. The Graphics are basic but that comes with it being a fairly oldish game but they don't take from the content at all. The badly done accents of both the French and the English soldiers are hilarious too.

The only thing I find a bit annoying about the game is that there are so many different types of unit from all kinds of cultures and time period crammed into one big war. Being a student of history this is a little peeve to me despite that it gives the game a good variety of troops to play with since I know full well African warriors took no part in the war.

Each of the units playable needs to unlock a book which allows you to use them and this book also allows you to spend exp on the units to upgrade the abilities. This is a great feature and it really allows you to play about with specialising with the units.

However cheesy the game it, it's very fun to play and if you don't mind the bad graphics then it's a great game to just sit down and have a laugh.
Read more
Report abuse

JC
3.0 out of 5 stars Entertaining for awhile.
Reviewed in the United Kingdom on 1 August 2013
Verified Purchase
Based on personal views after playing quite a bit of Koei games. Gameplay is interesting for Koei fans who want a change of pace from action roleplaying to strategy/action roleplaying. After trying out most of the units, things start getting repetitive. Storyline is lacking. Progression is not at the pace I find challenging after a hundred battles... Still something to try out, but there are better games out there, don't get your hopes up for this one.
Read more
Report abuse

jake
5.0 out of 5 stars Love it
Reviewed in the United Kingdom on 14 May 2015
Verified Purchase
I love this game!!!!!!!! If your after amazing effects then this game isn't for you. If your a fan of dynasty warriors you will really enjoy it. Though it's probably more like the kessen games.
Read more
Report abuse
See all reviews
Back to top
Get to Know Us
Make Money with Us
Let Us Help You
And don't forget:
© 1996-2021, Amazon.com, Inc. or its affiliates