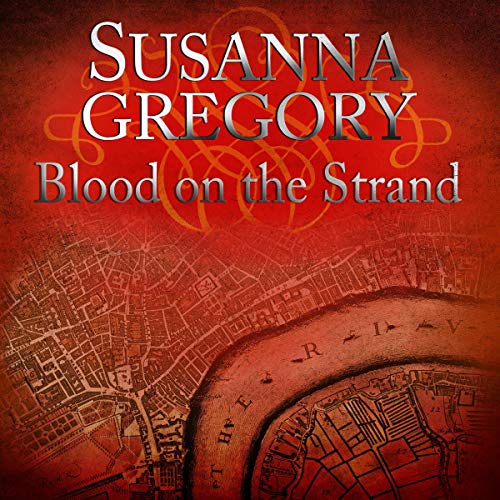 Blood on the Strand: Adventures of Thomas Chaloner, Book 2

The second adventure in the Thomas Chaloner series.

Rebellion is in the air of London in the spring of 1663.

Thomas Chaloner, spy for the King's intelligence service, has just returned from thwarting a planned revolt in Dublin, but soon realises that England's capital is no haven of peace. He is ordered to investigate the shooting of a beggar during a royal procession. He soon learns the man is no vagrant, but someone with links to the powerful company of Barber-Surgeons. His master, the earl of Clarendon, is locked in a deadly feud with the earl of Bristol, and an innocent man is about to be hanged in Newgate. Chaloner becomes embroiled in a desperate race against time to protect Clarendon, to discover the true identity of the beggar's murderer, and to save a blameless man from the executioner's noose.

4.3 out of 5 stars
4.3 out of 5
187 global ratings
How are ratings calculated?
To calculate the overall star rating and percentage breakdown by star, we don’t use a simple average. Instead, our system considers things like how recent a review is and if the reviewer bought the item on Amazon. It also analyses reviews to verify trustworthiness.

There are 0 reviews and 4 ratings from Australia

Clemens A. Schoonderwoert
4.0 out of 5 stars A Very Exciting Blood On The Strand!
Reviewed in the United Kingdom on 7 November 2021
Verified Purchase
**Should Read as 4.5 Stars!**

Read this book in 2011, and its the 2nd volume of the wonderful "Thomas Chaloner" series.

This tale is set in the Spring of the year AD 1663, and Thomas Chaloner, former Parliamentarian spy but now spy for the King's intelligence service, has just arrived home from Dublin, Ireland, after having thwarted a planned revolt there, but now finds that London is no haven of peace also.

During the royal procession a beggar is shot, and soon enough Thomas discovers that the man is not a beggar at all, but someone with links to the Company of Barber-Surgeons.

Besides that Thomas finds his master, the Earl Clarendon in a deadly feud with the Earl of Bristol, while an innocent man is about to be hanged in Newgate prison.

What is to follow is an intriguing mystery, in which Thomas Chaloner in a race against time must try to solve three cases, whether connected or not, and so against all hope but determined to succeed he has to use his wits and cunning to unravel the mysteries surrounding all these cases, and in a terrific executed plot he will be able to save the innocent man in Newgate from the noose, find the culprit of the murder and save his master Lord Clarendon from a deadly feud.

Highly recommended, for this is a excellent addition to this great series, and that's why I like to call this episode: "A Very Exciting Blood On The Strand"!
Read more
Report abuse

The Keen Reader
5.0 out of 5 stars Blood on the Strand
Reviewed in the United Kingdom on 27 July 2015
Verified Purchase
This is the second in the Thomas Chaloner mystery series, another series by the author of the marvellous Matthew Bartholemew series. Thomas Chaloner lives in Restoration England, and at the time of this story London is celebrating (although it seems only the courtiers still want to show their appreciation of the King) the third anniversary of the Restoration of King Charles II to the throne. Chaloner has been hired to keep an eye on the arrival of the procession at Westminster Abbey, and his investigation into an apparent vagrant outside the Abbey ends badly. In the meantime, there are questions about the death of a wealthy merchant, Matthew Webb who is killed outside his home one night after returning from a Guinea Company dinner. Chaloner finds himself caught up in Court intrigue, espionage, skullduggery, jealousy, betrayal and murder, and quickly feels he is well out of his depth in the London he no longer recognises.

This is another great story featuring Thomas Chaloner. In this second story, I felt that we had learned a bit more about Chaloner, and understood his character better. He is a good man trying to find his way in a world he doesn’t really understand any more, but he wants at the same time to see justice done, and to protect his friends. His relationship with the ex-Spymaster Thurloe is strong, but Chaloner never really knows who he can trust; and in Restoration London, trusting the wrong person could be fatal.

I thoroughly enjoyed this story; the characters are well drawn, the mysteries are complex and intriguing, the ‘feel’ of seventeenth century London and the strong political and religious feelings of those who live and work there are very well presented. Chaloner is a character who is well realised, and I look forward to the next story in the series, The Butcher of Smithfield.
Read more
6 people found this helpful
Report abuse

paul
5.0 out of 5 stars A great read
Reviewed in the United Kingdom on 7 March 2019
Verified Purchase
Thomas Chaloner . Combined with dark and dirty streets in Charles 2 nds London. Spy's in plentiful numbers and a complex plot woven together with a little humour in places.
Chalenor manages to overcome the opposition with some help from his friends and in particular his old spymaster.
A great fast paced story with a cliff hanger conclusion.
What will be his next assignment ?
Read more
Report abuse

Kindle Customer
4.0 out of 5 stars Typographical Errors
Reviewed in the United Kingdom on 28 May 2021
Verified Purchase
The novel is fine, engaging and enjoyable - but I have to record my niggle that the paperback copy of 'Blood on the Strand' contained more typographical errors than in any other book that I have read.
Read more
Report abuse

Fish pie
3.0 out of 5 stars Not as good as the first
Reviewed in the United Kingdom on 27 February 2014
Verified Purchase
I bought this second book in the Chaloner trilogy because I had enjoyed the first one, but was rather disappointed. This one seems much more confusing and I realised that I was beginning to find Chaloner himself a bit irritating. The period detail is as convincing as ever and the writing is brisk and effective, I just didn't find the story very compelling, and as a result, kept losing track of what was going on. It may be because I wasn't able to settle down and get stuck in to this book and that was why I lost the plot, so maybe it's more of a holiday read rather than a book that you can pick up and put down easily.

The description of London during this historical period is excellent and very convincing. Overall the book is well-written, but I just found the story didn't grip me.
Read more
Report abuse
See all reviews