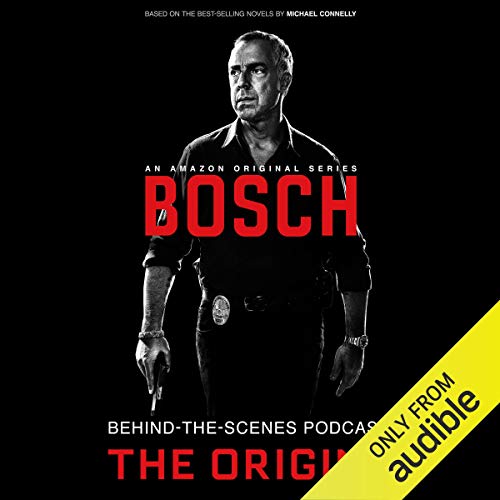 Bosch Behind-the-Scenes is the Official Podcast of the critically-acclaimed Amazon Original Series about LAPD homicide detective Harry Bosch, based on Michael Connelly's best-selling novels. NOTE: Spoilers Ahead! Key plot and character details are revealed from Season One of Bosch.

In this exclusive podcast, author Michael Connelly and Executive Producer Henrik Bastin (The Killing, Burn Notice) discuss the creation and production of Bosch, from the origins of the series to how it found a home at Amazon to casting its star, Titus Welliver (Lost, The Good Wife). Connelly shares his experiences of working on the show and offers Harry Bosch fans an idea of what they can expect from the much-anticipated series.

Stream the full season of the Amazon Original Series Bosch prior for a spoiler-free experience. Only on Amazon Instant Video.

Read more
©2015 Amazon.com, Inc. or its affiliates, and Fabrik Entertainment, Inc. (P)2015 Audible Inc.
Previous page
Next page
By completing your purchase, you agree to Audible’s Conditions Of Use and Privacy Notice.
Sold and delivered by Audible, an Amazon company

5.0 out of 5 stars
5 out of 5
3 global ratings
How are ratings calculated?
To calculate the overall star rating and percentage breakdown by star, we don’t use a simple average. Instead, our system considers things like how recent a review is and if the reviewer bought the item on Amazon. It also analyses reviews to verify trustworthiness.

Mich T
5.0 out of 5 stars Closest series to a book ever!
Reviewed in Australia on 13 March 2016
Binge watching season 1 of Bosch fashioned on the awesome books written by Michael Connelly. Great casting, and it feels like I'm still reading the books! Probably the closest series I've ever seen the the actual book. Titus Welliver, as Harry Bosch, brings a great mix of old and new, book and TV. Please keep this series going, it's totally enjoyable even if you haven't read any of the books.
Read more
Helpful
Report abuse
See all reviews