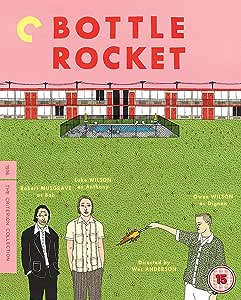 James Caan stars in this crime comedy directed by Wes Anderson. Three friends, Anthony (Luke Wilson), Dignan (Owen C. Wilson) and Bob (Robert Musgrave) all dream of being on America's most wanted list as notorious thieves. The problem is that they're not very good. As the trio embark upon a series of hare-brained schemes to rob people and companies of their hard-earned money, they realise that they have to work together and learn the true value of friendship. Synopsis THE DEBUT FEATURE FROM WES ANDERSON, DIRECTOR OF RUSHMORE AND THE ROYAL TENENBAUMS! Wes Anderson first illustrated his lovingly detailed, slightly surreal cinematic vision in this witty and warm portrait of three young middleclass misfits. Fresh out of a mental hospital, gentle Anthony (Luke Wilson) finds himself once again embroiled in the machinations of his best friend, elaborate schemer Dignan (Owen Wilson). With the aid of getaway driver Bob (Robert Musgrave), they develop a needlessly complex, mildly successful plan to rob a small bookstorethen go on the lam. Also featuring Lumi Cavazos as Inez, the South American housekeeper Anthony falls in love with, and James Caan as local thief extraordinaire Mr. Henry, Bottle Rocket is a charming, hilarious, affectionate look at the folly of dreamers. Shot against radiant southwestern backdrops, its the film that put Anderson and the Wilson brothers on the map. DIRECTOR-APPROVED SPECIAL EDITION FEATURES New, restored high-definition digital transfer supervised and approved by director Wes Anderson and director of photography Robert Yeoman Dolby Digital 5.1 soundtrack (DTS-HD Master Audio 5.1 on Blu-ray) Commentary by director/co-writer Anderson and co-writer/star Owen Wilson The Making of Bottle Rocket: an original documentary by filmmaker Barry Braverman featuring Anderson, James L. Brooks, James Caan, Temple Nash Jr

4.7 out of 5 stars
4.7 out of 5
131 global ratings
How are ratings calculated?
To calculate the overall star rating and percentage breakdown by star, we don’t use a simple average. Instead, our system considers things like how recent a review is and if the reviewer bought the item on Amazon. It also analyses reviews to verify trustworthiness.

NIMROD
4.0 out of 5 stars Bottle Rocket - a charming debut
Reviewed in the United Kingdom on 4 March 2010
Verified Purchase
Martin Scorsese has called Wes Anderson's debut feature film "Bottle Rocket" one of his favorite films of the 1990s. At first I was surprised upon reading this, but looking at the film and hearing Scorsese talk about film in general, I can see why. On the surface, Anderson's and Scorsese's films have little, if anything, in common. But if you think about it, "Bottle Rocket" is a film about friendship between young men, not that different from Scorsese's "Mean Streets." Also, colour is always an active agent in Anderson's films, another aspect shared by Scorsese. And most of all, both filmmakers have a genius sense for soundtracks, i.e. what songs are most suited to the frame. I particularly admire the timing of the music, such as the use of The Proclaimers' song "Over and Done With" and The Rolling Stones' "2000 Man" and the way they fit in with their respective scenes.
"Bottle Rocket" is a story about two characters, Anthony and Dignan and their feeble life of crime. What makes the film special is the infectious optimism, a sentiment that is neither artificial nor forced as it usually is in independent American films. Neither is the comedy, which just flows quite naturally and never intrudes upon the characters' believability. Anthony (played laconically by Luke Wilson) has just been in a psychiatric hospital for "exhaustion." As his little sister points out, there seems to be little cause for exhaustion in Anthony's unemployed, laid-back lifestyle, but as the film progresses we understand that it is Dignan who is the cause. The development of the character story (which throbs underneath the veneer of heist-buddy-comedy film) comes over beautifully, the pacing is perfect and the end result is one of Wes Anderson's most touching films to date. It does not have a trace of cynicism in it, a rarity in today's world. When Anthony meets a girl and falls in love, his best friend is happy for him instead of being jealous. Although it inevitably gets in the way of their friendship, it does not make any lasting damage upon it. The film's very happy ending feels real and natural.
Criterion has of course given this film a proper sendoff - marvellously packaged with interesting special features, a fine booklet and a neat picture quality. Then again, I expected nothing less of Criterion than to show proper respect for one of the most original and exciting filmmakers in the US today.

I have no idea how Bottle Rocket (1996) has gotten it’s bad reputation as one of Wes Anderson’s weaker films because it is absolutely delightful! Wes Anderson’s directorial debut Bottle Rocket is full of his signature auteur style already established with striking symmetrical cinematography, quaint wide shots, intimate facial close-ups, quirky characters, gentle writing, and a fondness for the coming of age genre. Robert D. Yeoman’s cinematography finds the cutest framing and funniest angles to capture the absurdity of these foolish criminals’ schemes.

Straight out of the gate, Wes Anderson finds his own voice with a pleasant script that dives deep into unhappy young men that want more out of life and don’t want to work without ever judging them. Owen Wilson actually co-wrote Bottle Rocket with Wes Anderson likely adding his charm and earnestness to the affair. Bottle Rocket is uplifting and warm with a tender perspective on aimless youth. You’ll leave Wes’ warmhearted Bottle Rocket looking for close friends to cherish.

Bottle Rocket is easily one of Wes Anderson’s best feature films and quite charming. Anderson’s direction is intimate for the romance, endearing for the friendship, and hilarious for all the comedy aspects. The laid back vibe of Bottle Rocket akin to the feeling that Fargo or Nacho Libre give you. Bottle Rocket is Reservoir Dogs and Heat meets The Big Lebowski. I had a blast watching Bottle Rocket! It gets funnier and funnier as this heist farce turns from intricate crime thriller into endearing robbery spoof. The chaotic finale is too funny to miss!

Mark Mothersbaugh’s score is upbeat and alternative at all times. The entire soundtrack is a quick wave splashing over you. It’s bright and refreshing with cool alternative rock songs shoved into every scene neatly.

Luke Wilson is really likable and genuine as the lead Anthony Adams in Bottle Rocket. His chemistry is endearing with Lumi Cavazos as Inez. She’s pretty and sweet in this gentle way that makes Inez instantly sympathetic. Luke Wilson has never given a better acting performance than Bottle Rocket. Likewise, Owen Wilson is phenomenal as Anthony’s rowdy and rough comrade in crime called Dignan. He’s funny and intense like Owen Wilson never tried to be since. Andrew Wilson hilariously kills it as the mean heel called Future Man. Robert Musgrave is strange and funny as the always complaining rich cohort Bob Mapplethorpe.

Lastly, James Caan is wonderful as the karate enthusiast, part-time landscaper, and professional thief Mr. Henry. His playful character is both enjoyable and intimidating. His final scene is brilliant, but I adore the scene at the country club where Caan stands up to Andrew Wilson’s Future Man in a threatening speech on behalf of Robert Musgrave’s meek Bob.

In short, Bottle Rocket is a brisk 91 minutes of irreverent joy and creative energy. David Moritz’ slick editing drives you along a crime trio on the run in record time. Wes Anderson explores friendship, brotherhood, maturity, and love with a carefree attitude and breathtaking expression.

Michael W.
5.0 out of 5 stars A really fun and touching movie
Reviewed in the United States on 24 April 2019
Verified Purchase
Disc was in perfect shape and played flawlessly. Shipping was on time. As far as reviewing the movie, I had seen it years ago and still love it. This is a very early Wes Anderson/Owen Wilson film about a trio of young guys all with different personalities and ambitions trying to make a hustle that they're not quite qualified for. Its pretty much an all guy movie, you can count the females on one hand, but its a very human movie and the dialog is great. And there's a bit of surprise at the end. I will definitely watch this one more than once.
Read more
4 people found this helpful
Report abuse
See all reviews
Get FREE delivery with Amazon Prime
Prime members enjoy FREE Delivery and exclusive access to movies, TV shows, music, Kindle e-books, Twitch Prime, and more.
> Get Started
Back to top
Get to Know Us
Make Money with Us
Let Us Help You
And don't forget:
© 1996-2020, Amazon.com, Inc. or its affiliates