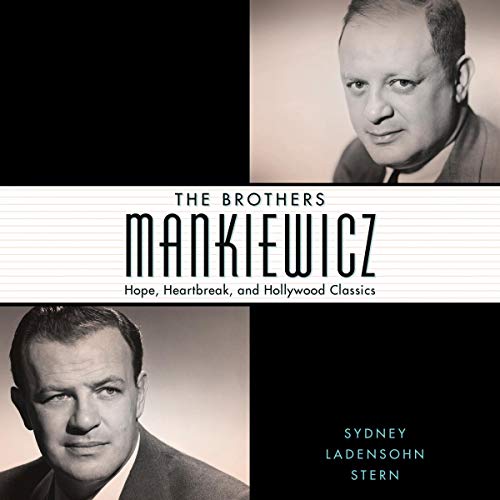 Herman J. (1897-1953) and Joseph L. Mankiewicz (1909-1993) wrote, produced, and directed over 150 pictures. With Orson Welles, Herman wrote the screenplay for Citizen Kane and shared the picture's only Academy Award. Joe earned the second pair of his four Oscars for writing and directing All About Eve, which also won Best Picture.

Despite triumphs as diverse as Monkey Business and Cleopatra, and Pride of the Yankees and Guys and Dolls, the witty, intellectual brothers spent their Hollywood years deeply discontented and yearning for what they did not have - a career in New York theater. Herman, formerly an Algonquin Round Table habitué, New York Times and New Yorker theater critic, and playwright-collaborator with George S. Kaufman, never reconciled himself to screenwriting. He gambled away his prodigious earnings, was fired from all the major studios, and drank himself to death at 55. While Herman drifted downward, Joe rose to become a critical and financial success as a writer, producer, and director, though his constant philandering with prominent stars like Joan Crawford, Judy Garland, and Gene Tierney distressed his emotionally fragile wife who eventually committed suicide. He wrecked his own health using uppers and downers in order to direct Cleopatra by day and finish writing it at night, only to be very publicly fired by Darryl F. Zanuck, an experience from which Joe never fully recovered.

For this first dual portrait of the Mankiewicz brothers, Sydney Ladensohn Stern draws on interviews, letters, diaries, and other documents still in private hands to provide a uniquely intimate behind-the-scenes chronicle of the lives, loves, work, and relationship between these complex men.

Read more
©2019 Sydney Ladensohn Stern (P)2020 Random House Audio
Previous page
Next page
Learn more about membership
By completing your purchase, you agree to Audible’s Conditions Of Use and Privacy Notice.
Sold and delivered by Audible, an Amazon company
Share

4.7 out of 5 stars
4.7 out of 5
158 global ratings
How are ratings calculated?
To calculate the overall star rating and percentage breakdown by star, we don’t use a simple average. Instead, our system considers things like how recent a review is and if the reviewer bought the item on Amazon. It also analyses reviews to verify trustworthiness.

Wingate
5.0 out of 5 stars Sets the record straight on Kane
Reviewed in the United Kingdom on 26 October 2020
Verified Purchase
Both brothers were exceptionally talented. Herman writing the screenplay for the best film ever made.Joe for many films that remain classics.The author does an excellent job of melding these two fascinating careers and lives together
Read more
Report abuse

stephen kuzak
5.0 out of 5 stars Great book on old Hollywood!
Reviewed in Canada on 18 February 2021
Verified Purchase
I've read many books on the old days of La La Land and this is one of the best! Both brothers are interesting and had a huge hand in shaping early Hollywood. A great read. Goes well with TCM...
Read more
Report abuse

Dona Munker
5.0 out of 5 stars Everything a good biography should be
Reviewed in the United States on 29 October 2019
Verified Purchase
I don't read many Hollywood biographies, but I love the good ones because of the insights they give you into creative men and women who inhabited a world most of us will never enter. That's what a serious biography should do, and this book about two brothers--one troubled but likable, the other troubled and not so likable who are important figures in the history of films--is absorbing from the get-go. It's well-written and insightful, keeps its eye on the ball in spite of what must have been a labyrinthine amount of research, and doesn't pass judgment on its two difficult subjects. Highly recommended.
Read more
23 people found this helpful
Report abuse

James Cooper
5.0 out of 5 stars That's Entertainment!
Reviewed in the United States on 28 November 2019
Verified Purchase
I was fortunate to see Citizen Kane on its first release when I was an 11-year-old. What an enthralling experience! Nine years later I was equally captivated by All About Eve. So it was a delight indeed to read about the gestation and execution of these terrific films and the life and times of the brilliant brothers Mankiewicz. Author Sydney Stern has done an excellent job of bringing the siblings to life, and I read her book, in huge gulps, with delight. What an entertaining, incident-filled saga. It's a pity that a great read was marred by many obvious typos.
Read more
20 people found this helpful
Report abuse

C. M Mills
5.0 out of 5 stars The Brothers Mankiewiciz is an outstanding dual biography of two showbiz siblings of Hollywood fame
Reviewed in the United States on 16 April 2020
Verified Purchase
Last month I was watching TCM my favorite channel when Ben Mankiewicz introduced Sydney Stern to his audience. She is the author of this new book on the two brothers who made a major impact on Hollywood history. The brothers were sons of a distinguished Ph.D father who taught in several colleges in New York and Los Angeles
. Frank (1897-1953) became a reporter and covered Broadway. He graduated high in his class at Columbia University. Frank was a member of the famous Algonquin Roundtable and was friends which such literary luminaries as George S. Kauffman, Ben Hecht, Robert Benchley, Marc Connelly and many more. He relocated in Hollywood and became a valued screenwriter. Frank co-wrote the screenplay for Citizen Kane winning a screenwriting Oscar with his cowriter Orson Welles. Frank liked to drink, gamble and womanize although he remained married to Sara for over sixty years. He was an alcoholic known for his wit who died too young.
Younger brother Joe (1911-1993) followed in his brother's footsteps. He became a famous producer at MGM and bedded such stars as Joan Crawford, Loretta Young, Gene Tierney and more. He was twice married. He won several Oscars for his work and produced such classics as A Letter to Three Wives, All About Eve, The Ghost and Mrs. Muir and Cleopatra. He too loved to drink, gamble, womanize and sail boats.
Both the brothers were intellectuals who enjoyed reading and studying politics. They represent a vanished Hollywood studio system. The author has produced a beautiful book filled with period photos of the colorful era when the brothers were at their creative peak of wit, humor and a clever writing style. This is one of the best Hollywood books I have read in quite a while. If you love the movies this book will entertain and enlighten you!
Read more
12 people found this helpful
Report abuse
See all reviews
Back to top
Get to Know Us
Make Money with Us
Let Us Help You
And don't forget:
© 1996-2022, Amazon.com, Inc. or its affiliates