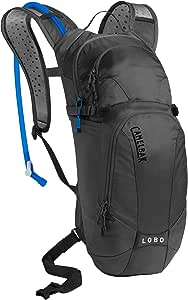 Designed for the sunny weather idealist. The Lobo is an everyday bike pack for those perfect days when you want to travel fast and stay hydrated. With 9 liters total storage capacity and a 3-liter Crux reservoir with Quicklink, it carries enough water for a substantial day-long ride. The Air Director back panel and ventilated harness keep you cool and comfortable, while the removeable stability belt offers another layer of customized fit. An integrated tool roll, secure zip pockets, and exterior helmet carry serve up versatility and organization. Partially made with post-consumer recycled materials.

Minimal to max carry - there's a solution for every rider. Designed for comfortable hands-free hydration and highly organized storage. Our collection of bike packs enable more time on the trail.

With an ergonomic handle for easier refilling and an on/off lever that makes it easy to prevent leaks. Like all of our gear, we put the Crux through exhaustive stress tests to make sure that it won’t fail you on the trail.

Partially made with post-consumer recycled materials.

Founded in 1989, CamelBak invented the hands-free hydration category and is the global leader in outdoor hydration. CamelBak continues to reinvent hydration and carry solutions that empower an active lifestyle through award-winning products that include everything from technical hydration packs to reusable bottles.

Swift
4.0 out of 5 stars An improvement for CamelBak
Reviewed in the United States on 28 April 2020
Colour: BlackVine Customer Review of Free Product( What's this? )
So, CamelBak is one of those companies that I gave up on some time ago. It seemed that they went down the "North Face" route of losing their focus on the nuances of what make technical products great and instead focused on selling branded but expensive lower quality junk to "image" users. The final straw was when I found myself frozen because during an ultramarathon a checkpoint volutneer had improperly closed the screw-back on a camelback water bladder i was using, leading to water seeping out through my jacket onto my skin during a near freezing mountain night segment. It was not the volunteer's fault - camelbak's bad design made this "false positive" close despite the significant weight and comfort weight penalty incurred by this strange design. i later replaced the camelbak bladder with a generic chinese one and found nearly everything about it - from the weight to the cinch to the bite to be infinitely better. But that was in the past - I, like most ultra runners, have long moved on from bladders to bottles.

And this is a cycling pack, not a running pack. I take my ultra-running seriously but not my cycling. While I'd never use this pack for an ultra run (all sorts of problems for that), the requirements for cycling are far more forgiving because every gram matters less (I mean, of course - this is a 3L hydration bladder, which is massive!). The pack does a good job of distributing this large amount of water and keeping it close to the wearer's body. The side stretchy pockets are the material that they need to be. The zipper pulls are reasonable (this is actually quite important). The material is abit thicker that it needs to be, but nothing too bad (the thickness is probably to sell this to motorbike wearers). The helmet carry system is basic but sufficient.

Where it really starts to lose points in my book is on the straps. The airflow system is just ok, but the strap system has no functionality whatsoever and is basically constructed of the sort of primitive (nylon?) materials that i expect from a costco backpack. contrast this to the world of salomon, raidlight, etc who in terms of running backpacks anyway have been outdoing themselves with ways to minimize friction and maximize comfort. this camelbak one looks like the builder has a set of really basic material to start with and did I guess an ok job, but really something that wouldn't look out of place 20 years ago. The 'chest strap sliding up and down on a rider' system is something that really looks ancient to me - it's heavy and uncofmortable and once one of the pieces breaks, your pack is junk.

I guess if you're wearing this over a jacket or shirt it matters less, but even on my short test cycle rides with this i felt the straps to be uncomfortable.

Oh, and did i mention - the bladder close system continues to be that terrible screw one that got me soaked those years ago.

So, well, 4 stars. Maybe that's a bit generous, but I don't know what the competition is in cycling. If they made a running backpack that was the equivalent of this, it'd be laughed off the stage, but maybe for semi-serious cyclists in fall (where you'd have a thicker top on to reduce some of the friction) this is not bad.
Read more
2 people found this helpful
Helpful
Sending feedback...
Thank you for your feedback.
Sorry, we failed to record your vote. Please try again
Report abuse

JeriOwl
5.0 out of 5 stars Quality construction from Camelbak
Reviewed in the United States on 18 April 2020
Colour: BlackVine Customer Review of Free Product( What's this? )
I really appreciated my first Camelback I'd bought back in 2005. I bought it for using on my SAR team but it had a real workout when I spent a couple months working in the MO Ozarks documenting a situation on behalf of FEMA. Over time (years) that water bladder had become brittle, though it is replaceabl. The bag itself was in reasonable condition for all those years but I'd lost it during a move. Living on a farm now I've realized additional uses for a Camelbak.

This bag features zippered compartments which are perfect to use to hold bags of nuts, trail mix, energy bars, even a small sandwich (turkey in a bagel for the win!) Same quality construction I've come to expect from Camelbak. My husband ran off with this bag, apparently he's decided it'll be perfect for those hot summer days on the tractor and working around the farm or in his work truck.

I recommend using with just plain water or a bit of added sea salt (electrolytes). Don't use sugary drinks, they'll mold quick enough! Rinse occasionally with a very mild bleach solution or preferably yet with a bit of hypochlorous acid (there are devices sold here on Amazon for this purpose) or another great option is to add an appropriate amount of colloidal silver to the drinking water to help maintain freshness. Aother experienced tip is to install a command hook in the shower to hang the freshly washed pack.
Read more
Helpful
Sending feedback...
Thank you for your feedback.
Sorry, we failed to record your vote. Please try again
Report abuse

Eric Aderhold
5.0 out of 5 stars Nice, small CamelBak
Reviewed in the United States on 15 May 2020
Colour: BlackVine Customer Review of Free Product( What's this? )
One of favorite forms of exercise, especially now, is walking around my neighborhood and nearby neighborhoods. This CamelBak is the perfect companion for a long walk in a city. It is a very minimalist hydration pack. It has just enough room for your water, a small snack, a sunglasses case, and a couple other things. Don't expect to be able to shove a jacket in here! The small size keeps the weight down and also doesn't warm up your back as much as a larger pack would. I don't plan to start using this for long hikes in the woods -- CamelBak makes larger packs that are much better suited for this. For an outdoor workout in a city it's just the right size.
Read more
Helpful
Sending feedback...
Thank you for your feedback.
Sorry, we failed to record your vote. Please try again
Report abuse