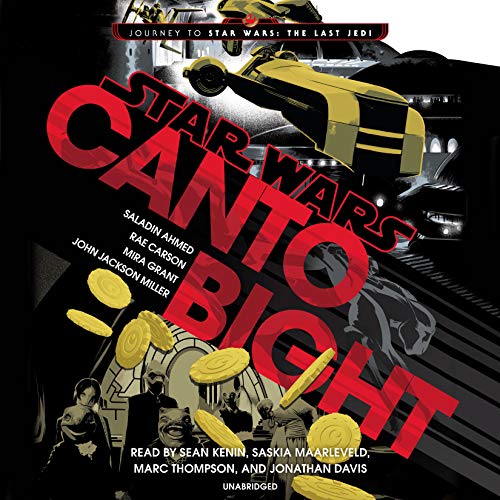 4.1 out of 5 stars
4.1 out of 5
229 global ratings
How are ratings calculated?
To calculate the overall star rating and percentage breakdown by star, we don’t use a simple average. Instead, our system considers things like how recent a review is and if the reviewer bought the item on Amazon. It also analyses reviews to verify trustworthiness.

James I Mapletoft
5.0 out of 5 stars The best Star Wars book in a long time.
Reviewed in Australia on 11 December 2017
Verified Purchase
This book blew all of my expectations away and then some. It is always nice to go into a story with no former knowledge and to enjoy, almost love, new characters. I challenge you to read this and not be taken.
If the scenes of Canto Bight in The Last Jedi are even close to this, then we are all in for a treat. Ten out of ten.
Read more
Helpful
Report abuse

Jas P
TOP 500 REVIEWER
5.0 out of 5 stars A Must Read for any Star Wars Fan or Lover of a good set of Fun Adventure Stories!!
Reviewed in Australia on 10 December 2017
Canto Bight is a collection of 4 short-to-medium stories about the Legendary gambling City of Canto-Bight on Cantonica. This is the place to go if you want to be involved in gambling of any sort, and those involved in the high stakes are always at Canto Bight. Lando and Han would have LIVED at Canto Bight back in their time if it had existed. Whilst these stories don’t follow any of the main characters, they give us the feel for Canto Bight, those that live and visit, the type of business dealings and the general, overall ambience. If you are a Star Wars fan, this is a fantastic book, with some really great stories and some brilliant characters. This is what Star Wars short stories are all about, fun, action, adventure, aliens, strange and amazing creatures, abilities and technology.
Following are reviews of the 4 individual stories for those interested – but this is brilliant!

K. G. A. Alavi
2.0 out of 5 stars The brighter the lights the greater the shadow
Reviewed in the United Kingdom on 24 December 2017
Verified Purchase
A very disappointing book. One of the reasons it took me so long to finish this book is I could not really summon to motivation to carry on reading it. For short stories, the stories are very slow paced. I did not really care for most of the characters, and it DEFINITELY DOES NOT add anything to the Last Jedi movie. The one think I did like in this book was that as were re-used/mentioned from story to story.

I could have learned everything I needed to know about Canto Bight from the two lines spoken by Rose in the movie, it is a bubble. The playground for the super rich, and once in the life time vacation for tourists, but build on the broken dreams of people who have lost too much or never had enough to leave the place.

It is written by three writer who are new to writing in the Star Wars universe. Then Jason Jackson Miller as a veteran Star Wars writer to finish off the book. Even though I did not like the book as a whole there were part that were ok to good.

Saladin Ahmed’s story to start the book off was ok. I would have given this story 3.5 stars. It is a slow start to a trusting tourist on a dream holiday that is quickly turning into a nightmare courtesy of the seedy residents of Canto Bight.

Rae Carson’s story of a resident masseuse forced fighting back against the “big fish” who will do anything to get what he wants, was ok but a bit too far fetched. Security on Canto is a joke if this is the case. 3 stars.

The final story is about Kal a gambler who meets a trio of brothers who make him question everything he has worked and believes it at the worst possible time. This was one of this and the first story were really the only ones that drew me in towards the end. Still very slow paced though. 3.5 stars.

Really this is the story of the underworld in the world of bright lights, glitz and glamor, a good premise but really nothing was add to release this under the “journey to the Last Jedi” title. I guess I will have to wait 2 years before I find out if any of these stories have any influence on the next movie. Quite disappointed really.
Read more
4 people found this helpful
Report abuse

Alaran
3.0 out of 5 stars A reasonable collection that expands upon the onscreen Canto Bight
Reviewed in the United Kingdom on 11 July 2018
Verified Purchase
Rather than a collection of short stories this book is more akin to a small group of novellas. The four included cover various aspects of life in Canto Bight. None of them feature any main characters from the films and each deal with a slightly different angle of Star Wars’ answer to Las Vegas.

‘The Last Jedi’ failed to provide the wealth and depth of alien worlds that usually characterises Star Wars films. Other than the inside of a prison cell, what was seen of Cantonica ended up being little more than a manic run through Canto Bight. It was a fairly weak effort of worldbuilding and, due to edited/cut material, failed to showcase any of the beauty of Dubrovnik. Therefore, although the stories aren’t particularly memorable, the major plus of this collection is that it, at least, redresses some of the above issues.

Between the four stories we learn something of the political system that governs Cantonica. After the briefest of appearances in ‘The Last Jedi’, the world’s ruler Contessa Alissyndrex Delga, generally referred to as the Countess, gets a few mentions across the collection and actually plays a substantial role in one of the stories. Different levels of society are also reflected in the collection and, as might be expected, there is a considerable amount of content focussed upon Canto Bight’s underworld. The content also expands on the fathier races that are a key element of this society. All this develops Canto Bight providing it with more depth and thus more of a sense of actually being a city.

‘Rules of the Game’ takes a tourist perspective to Canto Bight. It follows the hapless Kedpin Shoklop on his ‘dream’ holiday to Canto Bight where he falls for the Star Wars equivalent of multiple tourist traps. It is a tad on the frivolous, silly side, but in being so it is probably the most entertaining of the four stories.

‘The Wine in Dreams’ is concerned with the trade of expensive goods for the rich and infamous, the high movers of Canto Bight. Essentially it comes from the perspective of a dealer of rare, unique wines as she becomes embroiled in the schemes of some enigmatic twins.

The lead character of the third story is a masseur to rich patrons who embroil him in their plays for power. It is a tale that reveals more of the poverty of Canto Bight and is inspired by the poor children seen in ‘The Last Jedi’ who work looking after the fathiers. It contrasts the two ends of the social scale in the city.

Meanwhile, ‘The Ride’ focusses on the reason for Canto Bight’s existence, gambling. It features struggling gambler, Kal, having to forego his usual tactical approach in favour of blind luck in order to survive the night and pay off his debts. The card games can get a little monotonous but there is generally an amusing touch to it.
Read more
Report abuse

Tad
4.0 out of 5 stars Unnecessary? Probably, but still good fun
Reviewed in the United Kingdom on 18 January 2018
Verified Purchase
A strange one this. Second story nearly made me give up as I didn't like it at all. The rest have a certain charm but a strong finish with John Jackson Miller left me with a positive vibe. Really enjoyed his "A New Dawn" too. There's nothing Star Wars about this though. The odd mention of the wider galaxy but not much. Clearly this was the intention though. Canto Bight the book is like Canto Bight in the film - feels a bit out of place in the Star Wars I know. (Nothing like the musical number in Jabba's Palace though!)
Read more
2 people found this helpful
Report abuse

Daniel
4.0 out of 5 stars Some great short stories
Reviewed in the United Kingdom on 7 October 2018
Verified Purchase
I really enjoyed reading these short stories, from some great authors.

I like finding out more about the characters who you may only see a glimpse of in The Last Jedi.

It’s a fun read, and I would recommend to any Star Wars fan.
Read more
One person found this helpful
Report abuse

big_al_1983
1.0 out of 5 stars The literary version of pulling teeth... in a galaxy far, far away.
Reviewed in the United Kingdom on 17 July 2018
Verified Purchase
Honestly... utter rubbish.

Yes, that is a bit of a short, childish and overly dramatic opening line, but it sums it up quickly.

I was hoping that this book would repair the damage done by the pointless sequence in The Last Jedi... I was sadly disappointed, again.

Like The Last Jedi, it just wasn’t Star Wars.
Read more
Report abuse
See all reviews
Back to top
Get to Know Us
Make Money with Us
Let Us Help You
And don't forget:
© 1996-2021, Amazon.com, Inc. or its affiliates