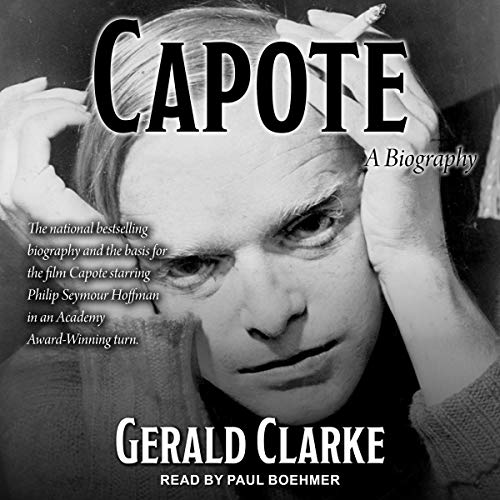 The national best-selling biography and the basis for the film Capote starring Philip Seymour Hoffman in an Academy Award-winning turn.

One of the strongest fiction writers of his generation, Truman Capote became a literary star while still in his teens. His most phenomenal successes include Breakfast at Tiffany's, In Cold Blood, and Other Voices, Other Rooms. Even while his literary achievements were setting the standards that other fiction and nonfiction writers would follow for generations, Capote descended into a spiral of self-destruction and despair.

First published in 1988 - just four years after Capote's death - Clarke paints a vivid behind-the-scenes picture of the author's life, based on hundreds of hours of in-depth interviews with the man himself and the people close to him. From the glittering heights of notoriety and parties with the rich and famous to his later struggles with addiction, Capote emerges as a richly multidimensional person - both brilliant and flawed.

Switch between reading the Kindle book & listening to the Audible narration with Whispersync for Voice.
Get the Audible audiobook for the reduced price of $5.49 after you buy the Kindle book.
Learn more about membership
By completing your purchase, you agree to Audible’s Conditions Of Use and Privacy Notice.
Sold and delivered by Audible, an Amazon company

4.5 out of 5 stars
4.5 out of 5
328 global ratings
How are ratings calculated?
To calculate the overall star rating and percentage breakdown by star, we don’t use a simple average. Instead, our system considers things like how recent a review is and if the reviewer bought the item on Amazon. It also analyses reviews to verify trustworthiness.

dave parkinson
5.0 out of 5 stars Brilliant but sad!
Reviewed in Australia on 5 April 2019
Verified Purchase
As good as a biography gets. Unbelievable amount of detail, made for a very sad read in parts, even sadder because the ending is not a mystery.
Read more
One person found this helpful
Helpful
Report abuse
See all reviews

Claudia Saatchi
5.0 out of 5 stars America's Greatest Writer?
Reviewed in the United Kingdom on 7 January 2013
Verified Purchase
Probably, besides I cannot think of any other classic American author who can match Capote's range and diversity. Who is not moved by his short stories, delighted by 'Breakfast at Tiffany's' or chilled to the core by 'In Cold Blood'?

What was needed to understand this complex and often troubled writer was a biography of sensitivity, scholarship and candor. Gerald Clarke' s magnificent book does just that. Moreover, its written in a style that is both informative and elegant. Clarke treats his wayward subject with affection and sympathy but always with a frankness that gives his book both credibility and balance.

If you like biography and are intrigued by the genius of Truman Capote, then read this book.
Read more
7 people found this helpful
Report abuse

Alastair McCallum
5.0 out of 5 stars funny, brave and downright hardworking
Reviewed in the United Kingdom on 6 February 2018
Verified Purchase
Genius....funny, brave and downright hardworking.....the thing about Capote is he was himself and made absolutely no pretense about it...but under all this was a glittering mind that purred like a powerful computer...as his masterpiece In Cold Blood is testimony.
Read more
One person found this helpful
Report abuse

Amazon Customer
5.0 out of 5 stars Five Stars
Reviewed in the United Kingdom on 3 March 2015
Verified Purchase
Very pleased with purchase. As described. Many thanks
Read more
Report abuse
See all reviews