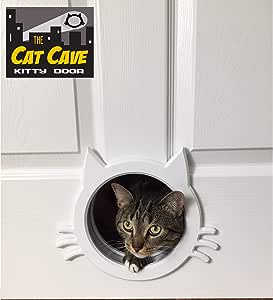 SUPERIOR QUALITY: The Cat Cave is made from solid composite PVC, designed to make setup easy and rewarding for you and your pet ARTISTCALLY DESIGNED: the unique cat head and tail are made to look adorable and make use of the door easy for just about any size cat AN ODOR FREE HOME IS EASY: close any door in your house and leave that nasty smelling litter box or food dish behind it, while still allowing your cat in and out of it. EASE OF USE FOR ANY CAT: because it is elevated on the door, cats can walk upright through the opening and not have to bend down or strain their back to get through the opening. EASE OF INSTALLATION: Use the template provided to mark your door, and with a jigsaw, you can quickly give your cat access to their litter box or food

4.8 out of 5 stars
4.8 out of 5
213 global ratings
How are ratings calculated?
To calculate the overall star rating and percentage breakdown by star, we don’t use a simple average. Instead, our system considers things like how recent a review is and if the reviewer bought the item on Amazon. It also analyses reviews to verify trustworthiness.

Mike
1.0 out of 5 stars Not good value.
Reviewed in Canada on 5 February 2020
Colour: WhiteVerified Purchase
Cheap wood. Does not take paint well. Not smooth at all so the paint does not get into all the crevices. The wood almost snapped off when I was trying to sand it down. Should be like $30 at most yet it cost me almost $100.

Find an alternative or make your own if you have the tools to do it. You can make a much better one for a fraction of the cost.

Carmen Hunt
5.0 out of 5 stars Cute, good quality & our cats love it
Reviewed in Canada on 12 February 2019
Colour: WhiteVerified Purchase
This door is ridiculously cute and our two cats love it! Coco likes to sit outside and watch us now. It does require a jigsaw to install, but if you're comfortable with one -- go for it!
Read more

Amazon Customer
5.0 out of 5 stars Cute item
Reviewed in Canada on 25 October 2019
Colour: WhiteVerified Purchase
Very cute but hard to install and it is over priced
Read more
Report abuse

Hope Beverly
4.0 out of 5 stars cool cat door - see notes about instructions
Reviewed in the United States on 21 September 2018
Colour: WhiteVerified Purchase
I shopped for cat doors for far longer than I really should have. Compare, contrast, etc. I didn't want a standard square door with the flap. At our last house, I installed those, and then the cats didn't like the flaps, so I took those off, and then the doors just looked ugly with the hinge holes and the lock mechanisms.

I ended up buying 3 doors, since I couldn't tell from the descriptions and reviews which one I would like. So, I ordered this door, the Kitty Pass and the Cathole.

I lined them all up in the photo, so you can see them side by side. I relatively quickly decided the cathole wouldn't do. It comes in unfinished wood (kudos for using real wood, though!) and has screws (kudos for using real screws!), and then the "brush" part. When the brush is inserted, it makes it too narrow for my larger cat (and maybe even my smaller), without them actively brushing themselves over the brush. I worried that they wouldn't want to squish through the hole and/or wouldn't like the feeling of the brush, as it is a very rough consistency, like the brush I use in the kitchen to get food off pots and pans. If I didn't use the brush, then there was no spacer between the two sides, so my hollow door would show. I didn't like that, either. So, bye Cathole.

So then it was between the kitty pass and the cat cave. I engaged my son, wet cat food and our larger cat, and tried to see if he would fit through the hole. Perhaps. But because the hole is at the bottom of the door, he would have to get down on his belly to flt through. Again, I worried that this would dissuade him from using the door (and therefore, the litter box). So, that left me with the cat cave.

To be clear, before I even chose this door, I had him walk through the circle, to make sure it would fit his girth (my son looked like a lion tamer, holding wet food on one side of the circle, and trying to keep the circle between the cat and the food!). He fit, no problem. Then came the installation.

The instructions contradict themselves. They say to mark up 2 inches from the bottom on the instructions, but then the template itself says to mark up 3 inches. I did 2 inches, to avoid having too much of the inset part of the door in the circle, as the glue to attach the facade can't reach the inset areas. If I had to do it again, I would probably do the 3 inches, and figure out a way to fill the space behind the facade. The instructions also appear to say to center the template on the mark you made, 3 inches up. Don't. Put the bottom of the template on the 3 inch mark, making a vertical line along the center with a pencil, to center the template to. Other people install it toward the side of the door; I chose the center because I like the symmetry. In the pictures you can see our cat, Marah, looking through the hole, and then as she leaves the hole (darn camera on my phone has a long lag time!). She had to crouch down a little to get through. She is our smaller cat, at about 9 pounds. Our other cat is a little taller an weighs about 16 pounds. He will have to crouch down even more, using this 2 inch height.

I think this will work out well, and it is much more aesthetically pleasing than the square doors.
Read more

Toni
5.0 out of 5 stars can become two cat doors in a bench to hide the litter!
Reviewed in the United States on 8 April 2018
Colour: WhiteVerified Purchase
Great product! Used it to make a hiding litter bench. I split it in half and used it for each side of the bench, with duct tape to hold it on.
Read more

27 people found this helpful
Report abuse
See all reviews
Get FREE delivery with Amazon Prime
Prime members enjoy FREE Delivery and exclusive access to movies, TV shows, music, Kindle e-books, Twitch Prime, and more.
> Get Started
Back to top
Get to Know Us
Make Money with Us
Let Us Help You
And don't forget:
© 1996-2020, Amazon.com, Inc. or its affiliates