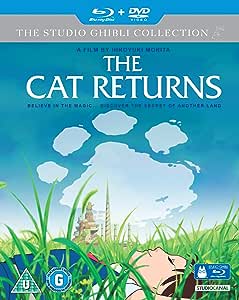 4.8 out of 5 stars
4.8 out of 5
1,441 global ratings
How are ratings calculated?
To calculate the overall star rating and percentage breakdown by star, we don’t use a simple average. Instead, our system considers things like how recent a review is and if the reviewer bought the item on Amazon. It also analyses reviews to verify trustworthiness.

Ms. P. J. Silverlock
5.0 out of 5 stars Surreal and Delightful: Something for the Cat Lover.
Reviewed in the United Kingdom on 23 July 2020
Verified Purchase
The first thing I'd like to get out of the way is, if you were one of the people who had a weird crush on Simba the Lion growing up - I know you're out there, I know at least two of you personally - this movie may be another strange experience.

At the start of this movie, Haru is a heroine reminiscent of Usagi in Sailor Moon. By that I mean she sleeps in, is late to school and is generally pretty clumsy. On her way home from school, she saves a cat from being run over by a truck, and is somewhat stunned when it stands on its back legs and thanks her for saving it. That's nothing compared to the shock she feels when that night, a whole procession of cats turns up to her house promising her many gifts and rewards for saving the life of the Prince of Cats. These gifts are more cat orientated than human orientated and the last prize, the "gift" of marriage to the Prince of Cats leaves Haru more than a little concerned. A voice tells her to seek "The Baron" and that's when the story really takes off.

One thing I really like about Studio Ghibli, or at least the ones I've watched, is how the English dub doesn't actually take anything away from the movie. It's no exception here. Anne Hathaway, Cary Elwes and Peter Boyle are fantastic, and although Tim Curry doesn't actually talk that much until the end, when he does, he kind of steals the show. This is a movie I flip between watching in both English and Japanese and don't feel cheated either way. Both Japanese and English Voice actors really bring their characters alive, from the clumsiness of Haru to the bluntness of Muta (The big white sidekick of the Baron, who gets very angry if you pronounce his name "Moo-ta". Which happens) all these characters feel real.

Speaking of characters. The Baron. So slick. So charming. So refined. So cool. Every time I've watched this with friends, there's always been one who has expressed some kind of mini crush on what is essentially a cat in a suit. Big props to Cary Elwes and Yoshihiko Hakamada for conveying that through their acting.

The DVD is rated a U and I think if you have children who love cats and a little bit of silly slapstick humour they would happily sit through this. That doesn't mean its a childs film, just that it is a film suitable for children. It's one of my favourite Studio Ghibli films and I may have to go and re-watch it after posting this.

DANO
5.0 out of 5 stars Child friendly and great.
Reviewed in the United Kingdom on 18 July 2016
Verified Purchase
Good ghibli movie .Better than the first one. completely different this is for small kids too. My girls 4&6 really enjoy it.
they say TOTORO then PONYO then KIKI are their favs so that might help you shop for another if like me have little ones... Spirited away is fantastic but a bit scary...
Read more
12 people found this helpful
Report abuse

Ian Thumwood
3.0 out of 5 stars Lacking in the usual Ghibli sparkle
Reviewed in the United Kingdom on 21 June 2013
Verified Purchase
I quite like the Ghibli films and bought this for my nephew. Having sat down and watching this, it is fair to say that this isn't quite the visual treat of the other films from this studio and the attention to detail in the drawing that usually marks their films is curiously absent.

Ghibli have an ability to produce films whilst are works of art and that are also surprisingly profound. They all seem to have a moral in the tale and if they have a failing, I suppose there is a cultural things where some elements can appear quite cruel or incorporate a level of violence that contrasts with the slapstick humour of say Tom & Jerry. There was one moment in this film where a host of unfatisfactory entertainers are thrown out of the window of a tower which did seem a bit alarming. this reservation aside, the story isn't bad and it did pass an agreable hour and a half. However, if you are a newcomer to the charms of Ghibli, this is probably one to explore later with "Whispers of the heart" (the film from which the Baron character in this effort first appeared) probably a first call along with "Kiki's delivery service" - perhaps the best of the bunch.
Read more
5 people found this helpful
Report abuse

Amazon Customer
5.0 out of 5 stars Loved it!
Reviewed in the United Kingdom on 28 July 2018
Verified Purchase
I've watched this twice so far! Once with my partner and once with my 6 year old son. My son was completely glued to the TV throughout the whole film! If you like cats and animation, this is the film for you!
Read more
2 people found this helpful
Report abuse

ross tomlin/Leonie
4.0 out of 5 stars Lovely film
Reviewed in the United Kingdom on 21 May 2019
Verified Purchase
Great film the animation is beautiful and the story is really good only issue is that an angle sign appears on the screen that I can’t get rid of but don’t let that put you off cos it might be something to do with the DVD player I put it in.
Read more
Report abuse
See all reviews
Get FREE delivery with Amazon Prime
Prime members enjoy FREE Delivery and exclusive access to movies, TV shows, music, Kindle e-books, Twitch Prime, and more.
> Get Started
Back to top
Get to Know Us
Make Money with Us
Let Us Help You
And don't forget:
© 1996-2020, Amazon.com, Inc. or its affiliates