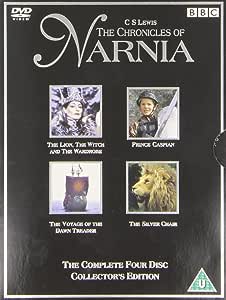 It is a quiet sort of a day in the heart of the English countryside when Peter, Susan, Edmund and Lucy stumble through the back of an old wardrobe into the enchanted land of Narnia. They embark on an extraordinary adventure discovering talking fauns, friendly beavers, giants and flying horses. When the White Witch learns of their presence in Narnia their lives are in danger, but there is talk that Aslan, the Great Lion, is on the move. Originally broadcast in 1988, this adaptation of C S Lewis' powerful fantasy for all ages uses live action, animation and special effects to recreate the most thrilling adventure of all. Relive the excitement of this memorable production in this magical DVD. The Lion, The Witch And The Wardrobe (Dir. Marilyn Fox, 1988): A production of C.S. Lewis' powerful fantasy for all ages using live action, animation and special effects to recreate this most exciting and enchanting adventure in the magical world of Narnia; a land of dwarves, nymphs and giants and also the land's arch-enemy the White Witch... Prince Caspian (Dir. Alex Kirby, 1989): Evil King Miraz and his Queen Prunaprisma are making plans to take over the kingdom. Heir to the throne Prince Caspian is forced to flee to safety... The Voyage Of The Dawn Treader (Dir. Alex Kirby, 1989): Edmund, Lucy and Eustace travel to Narnia to help King Caspian find the seven missing Lords... The Silver Chair (Dir. Alex Kirby, 1990): Eustace Scrubb and his bullied school friend Jill Pole, find themselves on a perilous quest to find the lost Prince Rilian, aided by their newfound reptilian companion Puddleglum (Tom Baker). Their travels lead them to the Giants of Garfang and underground to the land of the earthmen. Here they must face the fearful Queen of the Deep Realm, combat her magical powers, and break the enchantment of the Silver Chair.

4.5 out of 5 stars
4.5 out of 5
1,199 global ratings
How are ratings calculated?
To calculate the overall star rating and percentage breakdown by star, we don’t use a simple average. Instead, our system considers things like how recent a review is and if the reviewer bought the item on Amazon. It also analyses reviews to verify trustworthiness.

lee
5.0 out of 5 stars great movies to watch with the kids
Reviewed in Australia on 29 January 2019
Verified Purchase
these movies bring me back to my child hood
Read more
Helpful
Comment Report abuse
See all reviews

Cookiemonster
4.0 out of 5 stars Charming, and hasn't dated too badly.
Reviewed in the United Kingdom on 6 September 2016
Verified Purchase
I bought these for my daughter, who is enjoying the modern Chronicles of Narnia films but wanted to get further ahead in the series of stories.

Firstly, "The Lion, The Witch and The Wardrobe" is wonderful, and just as I remember it! Yes, the special effects are not up to modern standards, but that adds to the charm, and the storyline is all there.

"Prince Caspian" seems very rushed, almost as if the BBC made it on a shoestring budget and to fill a small gap on their TV schedule. My daughter was disappointed at how different it was to the modern film (it's been a long while since I read the books, so I can't comment on how closely it compares to that).

"The Voyage of the Dawn Treader" and "The Silver Chair" are both back to a similar standard to The Lion The Witch and the Wardrobe. In my opinion, they are just a touch long-winded, but they do complete the story nicely.

The picture quality throughout the DVD is good, though keep in mind that these are in the old 4:3 picture format, not the modern widescreen format.

Overall, I would say these represent excellent value for money, and are definitely worth buying for children who enjoy the Chronicles of Narnia books.

Luke L
4.0 out of 5 stars Brings back Sundays!
Reviewed in the United Kingdom on 3 December 2018
Verified Purchase
I bought this boxset purely for nostalgic reasons, because I really enjoyed the 2005 big budget blockbuster version and wanted to revisit the first one I ever saw. I bought it for myself, but my kids insisted on watching it with me, which I hadn't planned, because I feared it may not have aged well.

Funnily enough, the kids loved it! Yes, they laughed at some of the costumes, and some of the dialogue, but we ended watching all six episodes of TLTWATW in one sitting. It was a little like when I would watch it with my brothers on Sunday afternoons. It's certainly more faithful to the book than the movie was, sometimes to its detriment. When you've seen TIlda SWinton, Barbra Kellerman seems outrageously hammy as The White Witch now. The final battle is essentially Peter and Edmund waving their swords at cartoon sprites. It just doesn't work. No amount of rose tinted nostalgia can mask the fact that the Disney version pretty much trumps this one in every way you can think of. But I still love watching this on rainy days.

Prince Caspian seems really rushed to me. Given that I grew up reading the book, there's just so much they left out. I wish they'd spread out the story rather than cramming it into two episodes, because we don't get to see the character development the books portrayed. Stlll, the children's acting has improved, Miraz is wonderfully villainous, and the final battle is considerably better this time around.

When it comes to The Voyage of the Dawn Treader, there is really no comparison between the TV series and the film. This version is superior to the movie, without a shadow of a doubt. Samuel West simply IS the adult Caspian, Eustace Scrubb is as annoying here as he is in the book, Reepicheep is wonderful, and even though I haven't read it in a while, I don't remember spotting anything that had been left out. From the slave markets, to the island of the voices, to the three sleepers, to the dark island, to Goldwater... everything is there, and it's done so well, given the BBC's relatively meager budget. Yes, the dragon looks quite awful now, as does the Sea Serpent. But that was to be expected thirty years on, and it doesn't hurt the story that badly.

The Silver Chair was my favourite book of the series as a boy, and here they've done it justice. It's a six parter, so it doesn't feel rushed or cut in any way. Camilla Power makes for an excellent JIll Pole, and Scrubb is of course far mare likeable. Tom Baker as the dour but stalwart Marsh Wiggle Puddleglum is an interesting casting choice, but it works. Aslan is not very involved in the story, which I think is a good thing - he kept popping up in Dawn Treader! Oh and of course Barbra Kellerman hams it up again, this time as The Lady of the Green Kirtle. I will say the Earthmen look nothing like how I imagined them, though. And Prince Rilian is awfully shouty.

Obviously A Horse and His Boy and The Last Battle never received the adaptation treatment - probably because by the 80's the books may have been considered mildly racist. It's a real shame, because I like both books, as well as The Magician's Nephew, and i think the Beeb could have done something really good with them.

The bonus features are also worth checking out - it's interesting seeing the Pevensie kids all grown up and there's an exhaustive database of nearly every actor in the Chronicles. I never thought I'd be watching these again, yet here I am. Bless the BBC.
Read more
10 people found this helpful
Report abuse

Namouna
5.0 out of 5 stars The Best Version of the Narnia Chronicles!
Reviewed in the United Kingdom on 16 August 2017
Verified Purchase
In my opinion, this BBC serialisation of the Narnia Chronicles was greatly superior to the later Disney film versions of the individual novels. Who needs exotic locations and special effects costing millions when this boxed set captures the essence of Lewis's Christian allegory so effectively?
Read more
13 people found this helpful
Report abuse

Anne s
1.0 out of 5 stars School play
Reviewed in the United Kingdom on 15 December 2019
Verified Purchase
Oh no. This was the wrong one for me. I, like some others, thought it was the film versions. It's not. It's the BBC series . I always thought BBC stuff was good but it's quite bad. The beavers are people dressed up and not funny and the dialogue is ok but more like a school play. Tried really hard to watch it but couldn't get through the first one. As I'm housebound I was doubly gutted. Must look more carefully in future I've told myself
Read more
4 people found this helpful
Report abuse