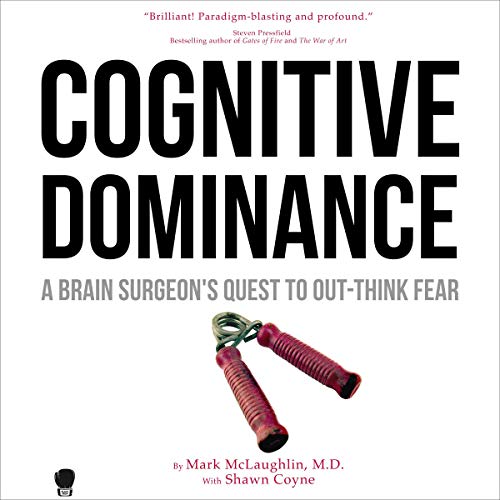 The first time he cut open a patient's skull, neurosurgeon Mark McLaughlin found himself confronting a powerful force that his fellow brain surgeons agreed was best never spoken of.

But Dr. McLaughlin knew that if he couldn't find a way to cope with this formidable foe, all he had striven for as a physician would be lost. So, with a scientist's analytical precision and a philosopher's worldview, McLaughlin derived and formalized a method by which he could act rationally and confidently under the operating room's lights and in all of the complex relationships in his life, especially under fear's profound influence.

With inspiration and guidance from intellectual titans like Rene Descartes, Charles Darwin, William James, and Carl Jung and contemporary thinkers like Nate Zinsser, Jordan Peterson, Iain McGilchrist, and J.K. Rowling, McLaughlin lays out his 20-year intellectual adventure story. The payoff of his odyssey is as life-changing as it is thrilling.

Switch between reading the Kindle book & listening to the Audible narration with Whispersync for Voice.
Get the Audible audiobook for the reduced price of $4.49 after you buy the Kindle book.
Learn more about membership
By completing your purchase, you agree to Audible’s Conditions Of Use and Privacy Notice.
Sold and delivered by Audible, an Amazon company
Share

4.6 out of 5 stars
4.6 out of 5
42 global ratings
How are ratings calculated?
To calculate the overall star rating and percentage breakdown by star, we don’t use a simple average. Instead, our system considers things like how recent a review is and if the reviewer bought the item on Amazon. It also analyses reviews to verify trustworthiness.

Brian Greer
5.0 out of 5 stars Ambitious, Intimate, Educational: A Brain Surgeon's Guide to Actualizing Our Best Self
Reviewed in Canada on 25 March 2020
Verified Purchase
Stellar! Dr. McLaughlin’s book is ambitious in scope and deserves a place on the reading list of anyone seeking to perform at the peak of their potential.

The book moves seamlessly from intimate stories of his neurosurgical career, through philosophy and science, to the moving and deeply personal conclusions. This is NOT a casual read of “quick tips”. The author takes us on a shared journey that demands our focus and participation, but the payoff is worth it.

Dr. McLaughlin offers up specific tools to interrupt the action of a runaway brain, and engage the powerful thinking machine that we humans are blessed with. The examples are gripping and true.

The book is both optimistic and realistic…, guided by a sense of the duty and obligation to contribute in this world. He invites the reader to choose to be creative and courageous, and offers methodology to get there, but it is understood that it’s the reader’s choice. We choose to take control of our actions, or we do not.

It is also (at least in my reading), a loving remembrance and testimony to the individuals who helped shape his world view.

S. Mann
5.0 out of 5 stars Powerful!
Reviewed in the United States on 21 April 2020
Verified Purchase
As a Green Beret for 2 decades, I’ve read and trained a lot on fear, but damn…you have something powerful here.

The need to reject System 1 thinking in the face of Complex Problems...I had to learn this the hard way when serving in Afghanistan! But, now, this gives me a tool that I can teach to Green Beret students to prepare for those dangerous, high-stakes negotiations.

And as I read the story of your Dad, I had tears flowing down my cheeks as I try to help my Dad navigate through his stroke. What you did as the Author-Protagonist in this story is one of the bravest, most relatable things I’ve ever seen in a big-idea non-fiction book. You put yourself out there like a true warrior. Skin in the game, man, skin in the game.

I don’t know what else to say except, congratulations and thank you. Thanks to both of you for this amazing work.
Read more
5 people found this helpful
Report abuse

Rachelle
5.0 out of 5 stars Loved it. So much to learn.
Reviewed in the United States on 13 January 2020
Verified Purchase
Just think how awesome it would be if all those bullies, bastards, bitches, and our own inner demons had better emotion regulation and improved decision-making ability. If everyone would/could read this book, I think we'd see a better world. Well written, engaging, and very informative.
Read more
6 people found this helpful
Report abuse

Shailen
5.0 out of 5 stars Educational, engaging, and inspiring. A must read.
Reviewed in the United States on 13 August 2020
Verified Purchase
Although the book was written by a neurosurgeon, the focus of the book is not exclusively on neurosurgery or medicine. Rather, it has anecdotes that give a clear map of the precise thoughts that enter one’s mind when confronted with unexpected fear, or “Phere” events, and the options that one is forced to confront to act on them. Dr. McLaughlin reminds readers that fear is a survival mechanism that was originally designed to protect us from threats, but when allowed to, it can overpower our thinking and decision-making. But with determination and a mental framework to target the source of the fear rather than the emotion of fear itself, any stressful situation in which the odds seem negative can be transformed into an outcome more favorable, or at the very least, doable.

This book has charts, diagrams, and illustrations, along with some definitions that do require some keeping up or occasional rereads. However, they are definitely worth following to make sense of the concepts and leave readers with an enhanced awareness and understanding of the brain’s connections between the fear response and the cognitive elements available to conquer it. The fact that Dr. McLaughlin backs up the concepts he explains with solid examples helps readers follow along on the journey through the complex corners of the human mind and his own personal journey that ultimately led him to be the best at what he does, even on his worst days. And he hopes the same can be done for anybody at any point in their life and in any career.

Favorite quote and chapter from the book: “Proximal control leads to micro flow”

Would absolutely recommend, even to those not in the medical space. This book has an unforgettable message that can be applied anywhere.
Read more
One person found this helpful
Report abuse

Lou
5.0 out of 5 stars “I know the truth that others don’t, and it is Impossible to accept and yet I go on and function.”
Reviewed in the United States on 14 February 2020
Verified Purchase
Dr. Mark McLaughlin’s Cognitive Dominance text is not a book just to read and then file on the book shelf. You will find a series of revelations that evolve as you progress through the chapters and relate your progress through everyday’ s life challenges, on your journey towards creativity and self actualization.

A moving and poignant Story reflects a clear analogy of Dr Mark experiencing, first hand, his student wrestler’s compromised ‘safety level’ of Maslow’s hierarchy of needs: A delayed sports bus that night, in the cold and pouring rain was transporting the team back to their respective closed schools. While Coach Mark was walking the last student home, six blocks through a questionable neighborhood, they came upon his dark and locked home. This a good example of seeing, first hand, another family deeply entrenched in unresolved issues of fear and safety, and locked in despair!
Read more
One person found this helpful
Report abuse
See all reviews
Back to top
Get to Know Us
Make Money with Us
Let Us Help You
And don't forget:
© 1996-2022, Amazon.com, Inc. or its affiliates