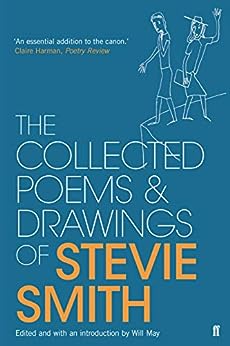 by Stevie Smith (Author), Will May (Editor) Format: Kindle Edition
See all formats and editions
Sorry, there was a problem loading this page. Try again.

When Stevie Smith died in 1971 she was one of the twentieth-century's most popular poets; many of her poems have been widely anthologised, and 'Not Waving but Drowning' remains one of the nation's favourite poems to this day.

Satirical, mischievous, teasing, disarming, her characteristically lightning-fast changes in tone take readers from comedy to tragedy and back again, while her line drawings are by turns unsettling and beguiling. In this wholly new edition of her work, Smith scholar Will May collects together the illustrations and poems from her original published volumes for the first time, recording fascinating details about their provenance, and describing the various versions Smith presented both on stage and page. Including over 500 works from Smith's 35-year career, The Collected Poems and Drawings of Stevie Smith is the essential edition of modern poetry's most distinctive voice.

I was much further out than you thought
And not waving but drowning.

- 'Not Waving but Drowning'

Stevie Smith (1902-71) lived in Palmers Green, London, and for much of her life worked as a secretary for the magazine publishers Sir George Newnes and Sir Neville Pearson. Her first book, Novel on Yellow Paper, appeared in 1936, and her final collection of poems, Scorpion, was published posthumously in 1972. In 1966 she received a Cholmondeley Award and in 1969 was awarded the Queen's Gold Medal for Poetry. --This text refers to the hardcover edition.

4.7 out of 5 stars
4.7 out of 5
25 global ratings
How are ratings calculated?
To calculate the overall star rating and percentage breakdown by star, we don’t use a simple average. Instead, our system considers things like how recent a review is and if the reviewer bought the item on Amazon. It also analyses reviews to verify trustworthiness.

Rik
5.0 out of 5 stars Fascinating.
Reviewed in the United Kingdom on 1 July 2021
Verified Purchase
A really good read, with so many straightforward poems to like, and others, more complex, to ponder on.
Read more
Report abuse

Gaynor Renwick
5.0 out of 5 stars The collection to have!
Reviewed in the United Kingdom on 2 March 2016
Verified Purchase
If you want to thoroughly get to know Stevie Smith's poetry and the accompanying sketches this is the book for you.
Read more
4 people found this helpful
Report abuse

J. Whiteley
5.0 out of 5 stars Wonderful collection.
Reviewed in the United Kingdom on 31 August 2016
Verified Purchase
Beautiful book.
Read more
4 people found this helpful
Report abuse
See all reviews
Report an issue
Does this item contain inappropriate content?
Report
Do you believe that this item violates a copyright?
Report
Does this item contain quality or formatting issues?
Report