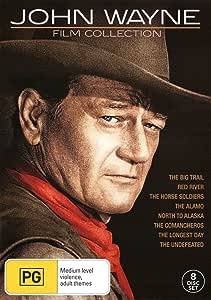 THE BIG TRAIL: In his first starring role, John Wayne plays Breck Coleman, a young scout who leads a caravan of pioneers through untold dangers including attacks by Indians, buffalo stampedes, snowstorms and rough terrain. Along the way Coleman is charmed by the lovely Ruth Cameron (Marguerite Churchill). But soon he finds he must defend her and his fellow travellers from the ruthless wagon master (Tyron Power, Sr) and a hustler (Ian Keith) whose bad habits make the journey perilous for everyone. RED RIVER: John Wayne as Tom Dunson, a self-made cattle baron who'll do anything to protect his way of life. So when plummeting livestock values demand that he drive his herd through the treacherous Chisholm Trail, Tom proves that he'll risk anything to reach his destination...even his own sanity. THE HORSE SOLDIERS: Based on an actual Civil War incident, The Horse Soldiers tells the rousing tale of a troop of Union soldiers who force their way deep into Southern territory to destroy a rebel stronghold at Newton Station. In command is hard-bitten Colonel Marlowe (John Wayne), a man who is strikingly contrasted by the company's gentle surgeon (Holden) and the beautiful but crafty Southern belle (Constance Towers) who's forced to accompany the union raiders. THE ALAMO: John Wayne produces, directs and stars in this chronicle of one of the most remarkable events in American history. At the Alamo--a crumbling adobe mission--185 exceptional men joined together in a sacred pact: They would stand firm against an army of 7,000 and willingly give their lives for freedom. NORTH TO ALASKA: After striking it rich in the Alaskan gold rush of 1898, prospector Sam McCord agrees to go to Seattle to pick up mining equipment...and his partner George Pratt's (Stewart Granger) fiancee, Jennie. After discovering that Jennie's gotten married to someone else, Sam returns to Alaska with a beautiful replacement for George named Angel. Trouble erupts, though, when Angel falls for the wrong man...Sam! THE COMANCHEROS: Captain Jake Cutter is a fearless Texas Ranger determined to bring down a violent gang of outlaws selling rifles to enemy natives. In the thick of his hunt, he's thrust into an uneasy alliance with Paul Regret (Stuart Whitman), a gambler wanted for murder in New Orleans. The deeper into the mission they get, the less they see eye-to-eye. But when they're captured, the unlikely partners quickly realise they must find common ground if they're going to stay alive! THE LONGEST DAY: On June 6, 1944, the Allied Invasion of France marked the beginning of the end of Nazi domination over Europe. The attack involved 3,000,000 men, 11,000 planes and 4,000 ships, comprising the largest armada the world has ever seen. THE UNDEFEATED: In the tumultuous aftermath of the Civil War, Colonel John Henry Thomas of the Union Army leads his heroic men to the Rio Grande to sell a herd of horses. Along the way, he crosses paths with his former opponent, Confederate Colonel James Langdon (Rock Hudson), who is leading his troops to Mexico to fight for hire. Old tensions flare, but when new trouble threatens them both, the old enemies realise their only chance for survival demands that they trust one another... and fight side-by-side!

Rita
4.0 out of 5 stars Good purchase.
Reviewed in Australia on 5 January 2020
Verified Purchase
This product was for my father and he is enjoying his time watching them.
Read more
Helpful
Comment Report abuse
See all reviews from Australia
Get FREE delivery with Amazon Prime
Prime members enjoy FREE Delivery and exclusive access to movies, TV shows, music, Kindle e-books, Twitch Prime, and more.
> Get Started
Back to top
Get to Know Us
Make Money with Us
Let Us Help You
And don't forget:
© 1996-2020, Amazon.com, Inc. or its affiliates