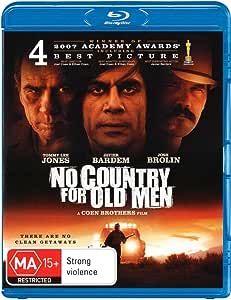 No Country For Old Men (Blu-ray)

The Coen brothers' stripped down and gritty chase thriller has a Vietnam vet desperately trying to give the slip to a relentless killer. While out hunting in the barren wilds of Texas, Llewelyn Moss (Josh Brolin) discovers the aftermath of a drugs deal gone wrong, with dead bodies, heroin and a case filled with $2million in cash. Deciding to take the money, Moss says goodbye to his wife (Kelly MacDonald) and takes off to plan his next move. It's not long before he discovers he's being followed by psychopathic ex-special forces hitman, Chigurh (Javier Bardem), who decides his victim's fate, guilty or not, on the toss of a coin. As Chigurh raises the bodycount, gaining ever nearer to Moss, he in turn is hunted by local Sheriff Ed Bell (Tommy Lee Jones), a seen-it-all-before cop, who could do without the excitement.

There are 0 customer reviews and 1 customer rating.
Get FREE delivery with Amazon Prime
Prime members enjoy FREE Delivery and exclusive access to movies, TV shows, music, Kindle e-books, Twitch Prime, and more.
> Get Started
Back to top
Get to Know Us
Make Money with Us
Let Us Help You
And don't forget:
© 1996-2020, Amazon.com, Inc. or its affiliates