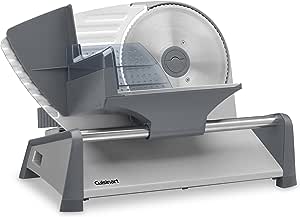 Brand: Cuisinart
4.2 out of 5 stars 1,490 ratings
Secure transaction
Returns Policy
Your transaction is secure
We work hard to protect your security and privacy. Our payment security system encrypts your information during transmission. We don’t share your credit card details with third-party sellers, and we don’t sell your information to others. Learn more
Available from these sellers.

The Kitchen Pro Food Slicer makes slicing meats, cheeses, vegetables, breads and other foods easy, fast and convenient! This professional-quality slicer adjusts from 1/32 inch to 1/2 inch thick to slice everything from paper-thin prosciutto to perfect servings of roast beef. Imagine how easy it is to make apple pie when the Kitchen Pro does all the apple slicing! It's convenient and simple to operate, and removable parts make it easy to clean. Any way you slice it, this premium appliance is a great addition to any kitchen, and a big help to any chef.

4.2 out of 5 stars
4.2 out of 5
1,490 global ratings
How are ratings calculated?
To calculate the overall star rating and percentage breakdown by star, we don’t use a simple average. Instead, our system considers things like how recent a review is and if the reviewer bought the item on Amazon. It also analyses reviews to verify trustworthiness.

For all the reviewers giving this 5 stars, this really is t as great as everyone makes it out to be. There are some serious design flaws and it takes some work and toying with to get the hang of this product.

Pros:
(1) will slide better than a knife and more consistent than a mandolin.
(2) fairly easy to operate. Cleaning didn't seem too bad. You can't put this or any parts in the dishwasher, which is a drawback for home users, but cleaning it didn't make me feel like it was the end of the world.
(3) it will cut near paper thing slices if you handle it the right way
(4) slices bread in consistent sized slices. I like that this can act not only as a meat and cheese slicer, but also a bread slicer for my fresh baked loaves
(5) does really save you money if you buy deli meats in bulk or cure your own deli meats. And the size is not too bad for a slicer. Fairly small and easily storable. It's also very light in weight.

Cons:
(1) major design flaws. The adjustment knob itself seems fine, but the backing where the object to cut slides it weak. It does move during slicing
(2) I don't like the plastic handgaurd. It feels a bit flimsy
(3) for something that is only 150w, I feel like inly being able to run it for 10 minutes is a bit frustrating, especially if you have a ton to slice. I understand the nature of the engineering behind it, but for a home - based kitchen appliance one would expect to be able to not have to let the thing "cool off" with such a low wattage rating. This tells me the engineering is not that well thought out.
(4) the blade does operate at a low rpm. I suppose it's not the end of the world for a home product, but i feel like they could have designed this a bit better with a higher rpm

Suggestions for use:
(1) for anything that it cut, if you want consistent sized slices, I would put the object of slicing a little higher. I know this could become a safety issue, so just think while you slice, and keep in mind you have a blade nearby. I've been using about 1/2 in- 1in off the bottom. It definitely yields better and more consistent cuts. I also don't have anything get stuck in the blade.
(2) for paper thin slices, you really need to set this almost near size 0. By following the first suggestion, it'll get you there. It won't be consistent, but at least you'll be close enough to be happy
(3) don't press too hard on the hand guard. I feel like this is one issue that led me to inconsistent slicing.
(4) don't go fast. Doing so will certainly ensure uneven and inconsistent slices. The instructions even direct you to operate slowly. But obviously don't slice, stop, slice, stop midway. You want one smooth slow pass. This will also get you there

Overall, this is a home kitchen product which is why I did give it a 4 star rating. If this were sold to me as a commercial product, I certainly would be complaining. Heck, the box even specifies to only use this in a home kitchen. If you're looking to leave your deli and move to home cured or bulk deli meats, then this will get you there. But it does require some playing around with. Don't expect to open this, shove a hunk of meat on it and expect high quality slices. Just like any non-commercial kitchen product, there will be inconsistencies. But for under $70, I think the quality of the product matches with the price well. You just have to learn how to use it the right way for everything you use it for. I've found different speeds of my hand moving and heights really make a difference based on the type of food being sliced.. I know most of us want these things to be intuitive and easy to use, but what can you expect for a kitchen product for less than $100? It does what it needs to do when used in the correct way for each type of food. With all that said, certainly worth the investment so far. I'll give updates if anything changes.

annef
4.0 out of 5 stars Does nice slicing job
Reviewed in Canada on 1 October 2019
Verified Purchase
Have a hard time releasing to clean ...
Read more
One person found this helpful
Report abuse

yasmina reiter
1.0 out of 5 stars Terrible product. Fist bad experience buying cuisinart products
Reviewed in Canada on 25 December 2017
Verified Purchase
Terrible product. Fist bad experience buying cuisinart products. There is no way to lock thickness gauge. Better off and quicker to use a sharp knife. Complete waste of money. Don't buy this product.
Read more
5 people found this helpful
Report abuse
See all reviews
Get FREE delivery with Amazon Prime
Prime members enjoy FREE Delivery and exclusive access to movies, TV shows, music, Kindle e-books, Twitch Prime, and more.
> Get Started
Back to top
Get to Know Us
Make Money with Us
Let Us Help You
And don't forget:
© 1996-2020, Amazon.com, Inc. or its affiliates