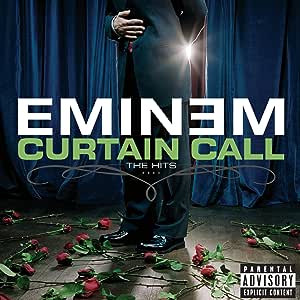 Eminem has sold over 65 million albums worldwide to date. Curtain Call - The Hits is a collection of Eminem's greatest hits like 'My Name Is', 'The Way I Am', 'Lose Yourself' and 'Stan' along with two all new studio tracks. Curtain Call is a CD that takes you from 1999 - 2005 and gives you a glimpse of what is to come in the future from Eminem! Interscope. 2005.

4.6 out of 5 stars
4.6 out of 5
1,237 global ratings
How are ratings calculated?
To calculate the overall star rating and percentage breakdown by star, we don’t use a simple average. Instead, our system considers things like how recent a review is and if the reviewer bought the item on Amazon. It also analyses reviews to verify trustworthiness.

Boltz
TOP 1000 REVIEWER
5.0 out of 5 stars One of the last gr8 rappers!!
Reviewed in Australia on 1 June 2020
Verified Purchase
A good collection of tracks. Not too many from the Slim Shady LP which is all the more reason to grab it..

Recommended for some nostalgia from one of the last great rappers!!

Shaun
5.0 out of 5 stars Worth every cent!
Reviewed in Australia on 22 June 2019
Verified Purchase
Great collection of eminems greatest hits.
Can't beat the sound of vinyl.
Excellent addition to the collection

irr
5.0 out of 5 stars Thanks
Reviewed in the United Kingdom on 27 June 2019
Verified Purchase
Arrived fine, goods in very decent condition. All the tracks of his that do not played as much anymore, if I had a complaint about this album it would be no 'Blue and Purple Hills'. First time I played album through there's a part where it seems the disc is scratched and jumps but it is meant to be like that, did look at new versions of the disc but with postage added they worked out dearer where postage was free from this seller. Thanks, again! Guess what back? Back again, in the CD player once again.
Read more
One person found this helpful
Report abuse

Rachel
5.0 out of 5 stars I absolutely love eminem and this album is absolutely brilliant
Reviewed in the United Kingdom on 21 May 2017
Verified Purchase
I absolutely love eminem and this album is absolutely brilliant. I am so happy on how good this album is, it has all the hits he's released on it when this album came out. I love listening to his music, he's an amazing artist and I recommend buying this to anyone who loves eminem as much as I do.
With the product I'm happy with the delivery and the condition it was in
I could listen to eminem over and over I can't wait for another hits album to come out with the songs he's released after this was brought out.
Read more
4 people found this helpful
Report abuse

Jack Spalding
1.0 out of 5 stars Not once but twice!!
Reviewed in the United Kingdom on 2 June 2020
Verified Purchase
I bought this record with high hope as I'm a massive fan of Eminem. item arrives no problem, I play side A with no problems and the excitement to get through the whole album is exceeding me. That was until I turned it over onto side B and Lose Yourself came on, this is where the vinyl kept repeating the same line over and over again. hey-ho I thought as I continued to listen on only to not even finish side B before the skipping starts again on the song Shake That, this is when I had to send it back with an instant replacement which came only days later.
Excited for my new start I tore off the film covering the vinyl and whipped it out onto my record player. now, we made it through side A with no issues and I was excited to make it through side B and the rest of the record with no issues. Well, I can tell you that didn't last long, Lose Yourself repeated itself at the same point so I couldn't believe it, I thought let's just strive through and see where we get, well that only took us to the next song where the skipping was even worse than on my original disc. I took it off and put it straight back in its cover. I am extremely disappointed, first of all for it to happen once but TWICE? that was a joke.
Read more
Report abuse

DragonLady
5.0 out of 5 stars Brilliant
Reviewed in the United Kingdom on 4 August 2018
Verified Purchase
Bought this album specifically for Lose Yourself which is a track that got me to listening to Eminem more and not just seeing why would you speak not sing, love this track and enjoying a few others. This is another album that stays in my car and I would miss it if I couldn't listen to cd's.
Read more
One person found this helpful
Report abuse

Got it for a bargain price as well

I would recommend this album , some of eminem's early and number 1 songs.
Read more
One person found this helpful
Report abuse
See all reviews
Get FREE delivery with Amazon Prime
Prime members enjoy FREE Delivery and exclusive access to movies, TV shows, music, Kindle e-books, Twitch Prime, and more.
> Get Started
Back to top
Get to Know Us
Make Money with Us
Let Us Help You
And don't forget:
© 1996-2020, Amazon.com, Inc. or its affiliates