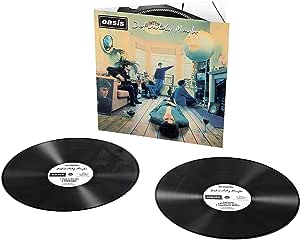 Definitely Maybe was originally released in August 1994 and was an immediate critical and commercial smash, The fastest selling debut album ever at the time, it went seventimes platinum in the UK over 2 million copies, and sold 5 million worldwide, Containing the classic debut single Supersonic, released April 1994, and subsequent singles Shakermaker, Live Forever, and Cigarettes Alcohol, Definitely Maybe frequently appears on 'best album of all time' polls, including a No.1 placing in a 2008 Q MagazineHMV poll of the 'Greatest British Albums'.

4.7 out of 5 stars
4.7 out of 5
546 global ratings
How are ratings calculated?
To calculate the overall star rating and percentage breakdown by star, we don’t use a simple average. Instead, our system considers things like how recent a review is and if the reviewer bought the item on Amazon. It also analyses reviews to verify trustworthiness.

There are 0 reviews and 3 ratings from Australia

Blew1
5.0 out of 5 stars After all, no 'Wonderwalls,' instead, Oasis's rawer, harder, better debut album, which has aged VERY well!
Reviewed in the United Kingdom on 11 December 2017
Verified Purchase
Oasis' debut hit the unexpecting UK Rock Scene like a ton of bricks, more or less coining the term/genre/whatever 'Britpop/rock,' Oasis were never comfortable with the label and understandably so. For all the clamouring on their much more polished and radio friendly, sophomore effort '...Morning Glory?,' 'Definitely Maybe,' is a rawer, more guitar-driven and unashamedly 'rock' album, despite what the one off 'Wonderwall' fans and journalists of the time will argue.
Liam Gallagher's voice is a brilliant mix of 'The Sex Pistols'' Jonny Rotten's OTT sneer and, well, Liam Gallagher, hos voice is very unique and compliments the music expertly, Noel might have written most of these songs (if not all!?) on his own, but as Liam retorted, commenting on their still ongoing separation : 'He wrote them, I made them,' ..hard to argue really!
To give Noel his due though, the guitar work is masterful, from borderline heavy/hard rock, up tempo, good time on a night out bounce on 'Rock 'n' Roll Star,' slowed down, pseudo-psychedelia 'Shakermaker' all the way to the mellow blues, country tinged closer 'Married with Children,' it's the guitar that is the perfect foil to Liam's throat and arguably, the leading voice..argue away! Kudos to the bassist and drummer who do an excellent job and are perhaps, the most eclipsed and under-appreciated band members ever!
Everyone knows the other 'big tracks,' 'Live Forever,' 'Cigarettes and Alcohol,' and 'Supersonic,' but its' the 'other' under appreciated gems that carry the weight of this album and make it just that - an album - not 5 massive hits and 6 fillers the track listing might suggest to someone who's never heard them before. 'Slide Away' is a long, epic and 'Columbia' is arguably the bands' best ever track. 'Digsy's Diner' might be considered a 'dog's dinner' by many but it's enjoyable enough, despite being the weakest on the album.
Finally, what males this album even more remarkable after 23+ years' is how well its' aged. The music is as fresh as ever, and while some of the 'up in the air' lyrics seem pretty random, a key line form 'Cigarettes and Alchohol;'

'Is it worth the aggrivation? To find yourself a job, when there's nothing worth working for?'

is as poigniant and relatable today to the average blue collar citizen as it ever was in an age of zero hour contracts. There are many more examples no doubt, but this is the one that stands out for me - you will no doubt find our own! After all, no 'Wonderwalls,' instead, Oasis's rawer, harder, better debut album, which has aged VERY well!

JP
5.0 out of 5 stars Had to get it on Vinyl and finally did!
Reviewed in the United Kingdom on 9 June 2020
Verified Purchase
First time around I had the album on CD, that was back in the 90s when it was first released. There was a massive gap in my vinyl collection without this iconic album. Love the fact that the Vinyl is now a heavier grade, although 2 disks instrad of 1 does mean you have to get up and turn it over quicker! But none of that takes away from what is a grand master of albums.
Read more

savvyc
5.0 out of 5 stars Classic album
Reviewed in the United Kingdom on 21 October 2016
Verified Purchase
I still love a bit of Oasis and for me this is one of the best albums, it was one I listened to at collage and still brings back such good memories.
I am a bit old fashioned, I like a CD and not an mp3, so it's nice to find Amazon with a good back catalogue of all my favourites. Sadly that old promise of CD's lasting forever never quite worked so I was glad to be able to buy this and not just in mp3 format.
Read more
2 people found this helpful
Report abuse

I'm only reviewing it because Amazon requires a review to dismiss items from my items to review list and it's getting cluttered with things that don't really need to be reviewed but there is no other way to dismiss them. I did ask if they could add a feature to remove irrelevant items but they don't seem to want to go down that route. I've just spent hours reviewing items. :(
Read more
4 people found this helpful
Report abuse

Darren Williams
5.0 out of 5 stars Oasis @their very best
Reviewed in the United Kingdom on 11 November 2020
Verified Purchase
Oasis at their finest. One album that has to be in your collection.
Read more
Report abuse
See all reviews
Get FREE delivery with Amazon Prime
Prime members enjoy FREE Delivery and exclusive access to movies, TV shows, music, Kindle e-books, Twitch Prime, and more.
> Get Started
Back to top
Get to Know Us
Make Money with Us
Let Us Help You
And don't forget:
© 1996-2020, Amazon.com, Inc. or its affiliates