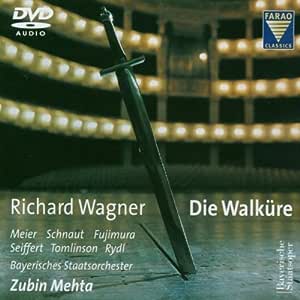 There is hardly any other work that is as closely associated with the Bavarian State Opera as Richard Wagner s "Die Walküre". This first evening of the Ring tetralogy did after all receive its world premier in Munich, where it has been a mainstay of that opera house s repertoire ever since.

When Zubin Mehta took over the position of Bavarian General Music Director in 1998, heralding a new era in the history of an opera house which in all of Germany is richest in tradition, this first cyclic performance of the Ring was a triumph for both the maestro and his musicians.

In the musical language of Die Walküre, the Bavarian State Orchestra with its very own sound and Mehta s conducting which is so full of energy, tautness and high emotion, complement each other to form a new interpretation which forms an arc stretching from the conducting of decades past to the modern style of today.

"The sonics are perfect at all listening levels… Zubin Mehta's leadership is joyously free of any eccentricities, his tempi are wisely chosen, his crescendi sensible, intense and exciting, his sense of the opera's huge moments as correct as the very intimate ones. And his orchestra plays brilliantly throughout…. Great conducting, amazing sound, almost ideal Siegmund and Fricka" --classicstoday.com

4.5 out of 5 stars
4.5 out of 5
2 global ratings
How are ratings calculated?
To calculate the overall star rating and percentage breakdown by star, we don’t use a simple average. Instead, our system considers things like how recent a review is and if the reviewer bought the item on Amazon. It also analyses reviews to verify trustworthiness.


Read more
One person found this helpful
Report abuse
Translate review to English
See all reviews
Get FREE delivery with Amazon Prime
Prime members enjoy FREE Delivery and exclusive access to movies, TV shows, music, Kindle e-books, Twitch Prime, and more.
> Get Started
Back to top
Get to Know Us
Make Money with Us
Let Us Help You
And don't forget:
© 1996-2020, Amazon.com, Inc. or its affiliates