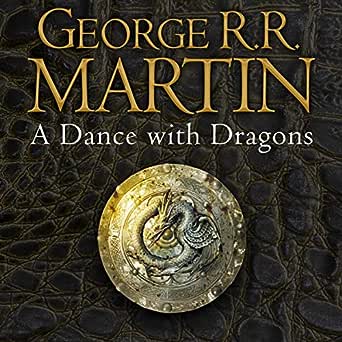 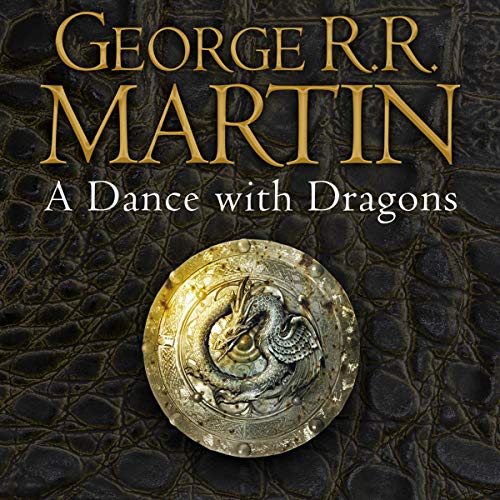 A Dance with Dragons: Book 5 of A Song of Ice and Fire

4.5 out of 5 stars
4.5 out of 5
12,757 global ratings
How are ratings calculated?
To calculate the overall star rating and percentage breakdown by star, we don’t use a simple average. Instead, our system considers things like how recent a review is and if the reviewer bought the item on Amazon. It also analyses reviews to verify trustworthiness.

Jennifer
TOP 10 REVIEWER
4.0 out of 5 stars ‘Things can change quickly in the game of thrones.’
Reviewed in Australia on 15 October 2019
Verified Purchase
I watched the first seven seasons of the HBO series ‘Game of Thrones’ before I started reading this series. I’d intended waiting until Mr Martin concluded the series before I started to read it, but I’m not sure that I will live that long. This, the fifth book in the series, was published in 2011 and apparently Mr Martin believes that a further two books are required to finish the story.

‘A reader lives a thousand lives before he dies.’

Now that I have read the first five books (and seen the first seven seasons of the HBO production), I’m not entirely sure that I want Mr Martin to finish the series. On one hand, I’d like to see where he takes it, on the other hand I like having the freedom to speculate.

So here I am, at the end of ‘A Dance with Dragons’. The future of the Seven Kingdoms is uncertain, under threat from every side. And who might rule? Will there be anything left to rule? Daenerys Targaryen is in the east, with her dragons. But in the north, the Wall, under the command of Jon Snow (the 998th Lord Commander of the Night’s Watch) is vulnerable. And what will happen if the creatures beyond the wall breach it?

So many questions. So few answers. I do have the eighth season of the HBO series to watch but I suspect that I’ll just have to use my imagination until Mr Martin finishes the books.

Kris Talbot
3.0 out of 5 stars Book 5
Reviewed in Australia on 13 August 2019
Verified Purchase
Took forever to tread this and still no end in sight Just a few more favourites bumped off. Is there a book 6 and if so when, and without it how did they finish the tv series
Read more
One person found this helpful
Helpful
Report abuse

Scott Osmond
TOP 100 REVIEWER
4.0 out of 5 stars Not As Good As The Earlier Entries
Reviewed in Australia on 22 May 2019
Verified Purchase
Although this is a large novel not a lot seemed to happen plot wise. By this I mean characters haven't moved along, are still where they started geographically or haven't accomplished their goals. Not sure if GRRM has lost interest or has written himself in to a corner. I hope the next one draws the threads together and advances the story.
Read more
Helpful
Report abuse

Ollie H
5.0 out of 5 stars Great book
Reviewed in Australia on 21 March 2020
Verified Purchase
Paperback version, it's relatively small so it's easy to throw in a bag. Print quality is clear and easy to read.
I'm really happy with this book for the price.
I don't need to review the contents of the book, everyone knows these novels are amazing.
Read more
Helpful
Report abuse

Sean Mitchell
4.0 out of 5 stars You know what you are getting!
Reviewed in Australia on 30 June 2014
Verified Purchase
Reading these as E books is quite interesting - it is nice but don't have the same feel of heft as the real tomes which are doorstoppers for the most part. Second issue and it is quite significant is that the maps are really cruddy resolution and I can't pore over them like I do in the books which makes the whole more difficult to follow - if they could improve the pictures or allow zoom in on the kindle platform that would be great.
Read more
3 people found this helpful
Helpful
Report abuse

Mickmi
5.0 out of 5 stars A great sequel
Reviewed in Australia on 12 October 2017
Verified Purchase
Like the books that have come before, this installment is hard to put down. It leaves many possibilities for the completion of the action, is well spiced with action and keeps the thread of many players running without being too complicated to follow.
Read more
Helpful
Report abuse

Amazon Customer
5.0 out of 5 stars A Classic
Reviewed in Australia on 26 June 2018
Verified Purchase
Brilliant read... a complex web of intrigue mystery and drama. Sheer escapism at its classical best, a book of epic proportions.
Read more
Helpful
Report abuse

Maisa Lopes Gomes de Paiva
3.0 out of 5 stars The plot thickens...
Reviewed in Australia on 19 July 2015
Verified Purchase
I love this series and can't wait to read the next books, yet it is depressive how nothing ever resolves... I do find disappointing that leading characters are somewhat forgotten whilst secondary cast drift the story away from the heart of the saga.
Read more
Helpful
Report abuse
See all reviews

Why you may ask have I continued reading these books given my negativity? Well it's because the first ones were so good, I keep hoping for the best and that the magic will return?

I think in reality though that its going to be a rare case of the TV people doing a better job than the author who seems to have ran out of puff.

I will read the Winds of Winter if it ever comes out, I just hope that the author gives us some resolution to at least some of the story lines he's created and rewards us for our patience.
Read more
13 people found this helpful
Report abuse

Partick Potter
4.0 out of 5 stars A big improvement from book 4
Reviewed in the United Kingdom on 20 May 2020
Verified Purchase
A Dance with Dragons was a distinct improvement on book 4 in the series as it told the stories of the stronger characters of the series.

That said, the book suffered from some of the problems book 2 had in a lack of conclusion and purpose in several storylines, particularly Dearnys who spent the entire book faffing around in Meeren as well as Tyrion who faffed around getting there for no obvious purpose. This book is clearly setting up events that will reach a conclusion in the next instalment.
Read more
Report abuse

Mr. Duncan Macfarlane
3.0 out of 5 stars Just as well written as his other books but far too slow and far too long
Reviewed in the United Kingdom on 11 June 2014
Verified Purchase
The quality of writing is just as excellent as any of the other books in the series, but it follows the trend of each book after the third becoming longer and slower than the last. There is excessive detail on trivial scenes like the appearance of a barge and river Tyrion is on lasting pages on end. It would be forgivable to make the book over 1,000 pages long if a lot happened in it, but the important plot events could have been fitted into a book half or a quarter of the length without losing anything. Perhaps Martin is losing any self-discipline on chapter and book length due to his success as a writer. Personally I feel publishers should be giving him some word limits and deadlines.
Read more
6 people found this helpful
Report abuse

I felt A Dance With Dragons was more of a summary in the aftermath of the events in Westoros for most of the book and a build up for what is to come from the east without a great deal of anything really happening anywhere.
Don't get me wrong, new events, characters and plots are unfolding so it's not stale and there looks to be some interesting developments coming after some big changes towards the end (one or two of which will shock if not anger most readers!) but it's just slow going and basically a build up for what is to come whilst tying up loose ends from the previous books.

That said, Martin still masters it. Whether you like the ending or not, the intrigue and anticipation he leaves with you at the end of the book is one of the great cliff hangers from A Song of Ice and Fire (IMO).
Thanks to his notorious style of killing off a favourite character and then leaving you with the small hint that they may yet be back...the next book couldn't come soon enough.
Read more
Report abuse

AK
4.0 out of 5 stars A partial return to form but little resolution
Reviewed in the United Kingdom on 3 May 2012
Verified Purchase
In order to better manage the length, GRR Martin decided to split the last installment of the series into two books, both happening concurrently but following different characters, this one and  A Song of Ice and Fire (4) - A Feast for Crows (Reissue)  (making it largely (but not completely) irrelevant in which order you read the two). Fortunately, the current volume is the more interesting of the two, having the more lively set of characters covered - still this is not to say that the quality of the book and the fascination of the events is on par with  A Song of Ice and Fire (3) - A Storm of Swords: Part 2 Blood and Gold (Reissue) .

As mentioned, you get the more interesting characters, such as Jon Snow and Tyrion Lannister to follow but even they are not in the middle of action but rather being described as characters in this book. If you were hoping for a real dance of dragons, a thundering finale, you will be disappointed. Some characters get killed off again, some wheels are set in motion or simply turn a bit further but in terms of resolution to the story you are not much closer than you were at the end of the third book.

The dragons burst onto the scene shortly and without much effect, the rest of the book offers hardly anything really placing it firmly into the fantasy sphere, and the new characters introduced get too superficial an entry to be a real enrichment.

Unfortunately, this all means a rather long wait for the next volume and a hope that at least some action will result or that the author returns to form fully, and manages to successfully operate the gargantuan cast once again. I would not advise fans of the series completely giving up at this point but it may well become more and more of an uphill battle, if the pace does not pick up with the next installment.
Read more
Report abuse
See all reviews
Back to top
Get to Know Us
Make Money with Us
Let Us Help You
And don't forget:
© 1996-2021, Amazon.com, Inc. or its affiliates