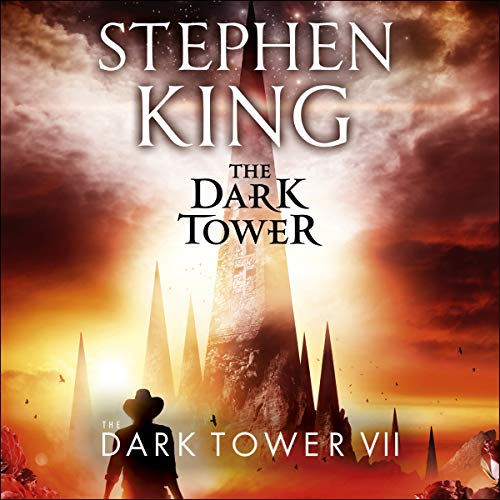 Stephen King's epic fantasy series, The Dark Tower, is being made into a major movie starring Idris Elba and Matthew McConaughey. Due in cinemas February 17, 2017 USA.

The final volume sees gunslinger Roland on a roller-coaster mix of exhilarating triumph and aching loss in his unrelenting quest to reach the dark tower.

Roland's band of pilgrims remains united, though scattered. Susannah-Mia has been carried off to New York to give birth. Terrified of what may happen, Jake, Father Callahan and Oy follow.

Roland and Eddie are in Maine, looking for the site which will lead them to Susannah. As he finally closes in on the tower, Roland's every step is shadowed by a terrible and sinister creation. And finally, he realises, he may have to walk the last dark strait alone....

You've come this far, come a little farther, come all the way, the sound you hear may be the slamming of the door behind you. Welcome to The Dark Tower.

Switch between reading the Kindle book & listening to the Audible narration with Whispersync for Voice.
Get the Audible audiobook for the reduced price of $8.49 after you buy the Kindle book.
Learn more about membership
By completing your purchase, you agree to Audible’s Conditions Of Use and Privacy Notice.
Sold and delivered by Audible, an Amazon company

Stephanie Ewing
5.0 out of 5 stars Amazing
Reviewed in the United States on 13 September 2013
Verified Purchase
The book came in amazing condition, earlier than i was told, which made me happy, and completes my collection of the Dark Tower series. Thank you
Read more
Report abuse
See all reviews