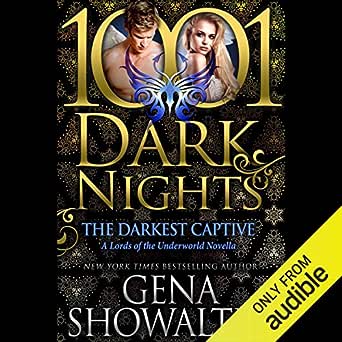 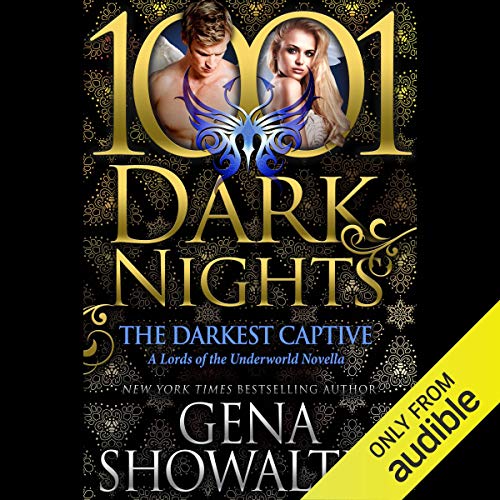 The Darkest Captive: A Lords of the Underworld Novella - 1001 Dark Nights

4.7 out of 5 stars
4.7 out of 5
593 global ratings
How are ratings calculated?
To calculate the overall star rating and percentage breakdown by star, we don’t use a simple average. Instead, our system considers things like how recent a review is and if the reviewer bought the item on Amazon. It also analyses reviews to verify trustworthiness.

Susan Cook
4.0 out of 5 stars Good novella for a quick read particularly if you are already a fan of the Lords.
Reviewed in Australia on 28 July 2019
Verified Purchase
Love the Lords of the Underworld series and this is a great addition. Started a bit slow but then plenty of action followed as well as interaction from the other Lords and their partners. The Lord in this story has waged war on the others for millennia and has not been a popular character but the author does well at showing him as deserving, warts and all. Gena Showalter never disappoints her readers.
Read more
Helpful
Report abuse

Gen’s book mail
TOP 1000 REVIEWER
5.0 out of 5 stars Galen & Legion’s story
Reviewed in Australia on 29 June 2020
Verified Purchase
We all loved to hate Galen. In Captive, Gena finally shows us his side of the story. A crucial read in the LOTU world in my opinion. 🦋🦋🦋
Read more
Helpful
Report abuse
See all reviews

FozzieBear
3.0 out of 5 stars Sorry but it was only OK
Reviewed in the United Kingdom on 5 December 2018
Verified Purchase
Firstly I want to say that I love the Lords of the Underworld stories and Gena Showalter's writing and maybe it's my fault because I have been waiting since book 4 for Legion and Galen's story and maybe it was a "big thing" for me that it was perfect but this book just wasn't. I do think it's a shame that a story we had been waiting such a long time for was the choice for a novella as this immediately takes away of lot of story and character development so that didn't help but I found this book immediately leaped straight into the two of them overcoming issues which have been built up in snippets over several previous books. For example we were told at the start of this book that Galen wants to get the relationship out of his system and to resume his plans with Fox and Legion was emotionally traumatised by her sadistic abuse by Lucifer and his demons and unable to consider physical intimacy then two minutes later the pants are coming off and Galen is all in forever! Another small niggle is the name thing... it was bad enough dealing with the move from Legion to Honey and now we have Leila thrown in the mix as a third name? I didn't hate it but as somebody who has been waiting for this book and eagerly downloaded it as soon as it released it just missed the mark a bit for me. I'm hoping that The Darkest King - William's story - is a return to form and I will be counting down the days to that one!
Read more
6 people found this helpful
Report abuse

Moose Girl
3.0 out of 5 stars Ok, but not great
Reviewed in the United Kingdom on 8 February 2021
Verified Purchase
Eh. I didn't love this, but it was okay. I think the problem is that Legion had been established earlier as a less than likeable character, and my opinion of her never really changed. Sure, she'd been tortured and I felt sorry for her... but I still didn't like her. The author was never really successful in turning that around for me. Galen, too, wasn't very likeable in earlier books, and although I warmed to him a bit in this book, I still wasn't totally on board. So, for me, I just wasn't invested in the romance of two characters I didn't particularly like.
Read more
Report abuse

Lorraine
4.0 out of 5 stars ok
Reviewed in the United Kingdom on 20 December 2018
Verified Purchase
was so looking forward to reading this, galen and legion's encounter in the bathroom, was intense and funny at the same time, so when the novella came out, just had to read it, a little disappointed, felt very rushed, a nice slow build up, but then all over with
Read more
2 people found this helpful
Report abuse

Sunshine
4.0 out of 5 stars The Darkest Captive
Reviewed in the United Kingdom on 10 June 2019
Verified Purchase
Galen: Demon of False Hope and Jealousy.

This story is action packed and fast paced. Their story was sweet, in a violent kind of way, but hey, this is Legion and Galens story.

Having just read four books straight on The Lords of the Underworld i can honestly say i am thoroughly looking forward to the next book. (Well i have been on holiday and i can't think of a better way to spend a week by the pool!)

DD
5.0 out of 5 stars A Lords of the Underworld Galen and Legion
Reviewed in the United Kingdom on 14 May 2020
Verified Purchase
I have loved this whole series, and these 2 have appeared briefly in many of the series. Never really liked either character so approached reading this with a little 'so what' attitude and really only bought and read it because of the rest of the series. Was pleasantly surprised to find myself enjoying this book, fast paced, grew to like both characters. A great lead in to The Darkest Assassin Fox and Bjorn's story
highly recommend

Read more
Report abuse
See all reviews
Back to top
Get to Know Us
Make Money with Us
Let Us Help You
And don't forget:
© 1996-2021, Amazon.com, Inc. or its affiliates