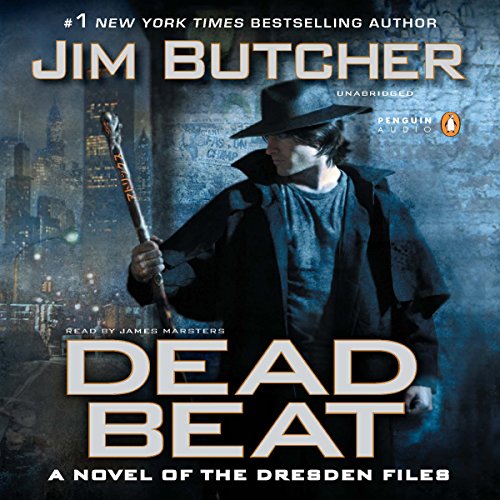 When a killer vampire threatens to destroy head of Special Investigations Karrin Murphy's reputation, unless Harry delivers the powerful Word of Kemmler to her, he has no choice. Now Harry is in a race against time to find the Word before Chicago experiences a Halloween night to wake the dead.

Switch between reading the Kindle book & listening to the Audible narration with Whispersync for Voice.
Get the Audible audiobook for the reduced price of $12.99 after you buy the Kindle book.
Learn more about membership
By completing your purchase, you agree to Audible’s Conditions Of Use and Privacy Notice.
Sold and delivered by Audible, an Amazon company

4.8 out of 5 stars
4.8 out of 5
2,353 global ratings
How are ratings calculated?
To calculate the overall star rating and percentage breakdown by star, we don’t use a simple average. Instead, our system considers things like how recent a review is and if the reviewer bought the item on Amazon. It also analyses reviews to verify trustworthiness.

C. De Malmanche
4.0 out of 5 stars Patterns emerge
Reviewed in Australia on 2 April 2020
Verified Purchase
Series has been out a while. Similar patterns to the previous stories. Plotline A eventually meets Plotline B; regular NPC faces show or do cameos. Usual patter describing each item that by book 7 we're pretty familiar with. Dresden is tall, interferes with electrics, and makes goof of himself.
Couple of small fight scenes. Eventually leads to Big Showdown(tm). Hey, I think I've read this one.

The story is an ok read, good if you love the series, but fits that same pattern too well.
Hoping that book 8 breaks the recipe.

Jim does build character a little, not entirely episodic, but are later books going to develop - or is it just a comic/game plot? is it just going to be switch of monster flavour of the week? is it going to just be a roleplaying game-esque/bond-esque constant lift of threat level rather than detective novel and mystery?
Read more
Helpful
Report abuse

Breanna
5.0 out of 5 stars It’s always good
Reviewed in Australia on 24 September 2018
Verified Purchase
Dresden is relatable, funny in a way you might be compelled to underline and always entertaining. This instalment has some wild elements that you happily accept as you’re enjoying the tumultuous caper so much. Murphy is seen as a girl by our boy again (and is surprised by it...seriously!? ) and there’s only minor sexism throughout the prose. A couple of new, loveable characters are filled out in the form of Butters and Ramirez; and you can pick up the story (a kind of magic I believe the Dresden files posses) at your leisure without skipping a beat (read this instalment to discover the pun).
Read more
Helpful
Report abuse

Kindle Customer
5.0 out of 5 stars Loved it
Reviewed in Australia on 19 October 2017
Verified Purchase
I don't know how Jim Butcher keeps getting better. Love it, love it, love it. Enough said. Can't wait for book 8
Read more
Helpful
Report abuse

ChrisM
5.0 out of 5 stars Excellent.
Reviewed in Australia on 22 October 2018
Verified Purchase
The Dresden Files book seven, Dead Beat, is an enjoyable and exciting ride from start to finish. Harry Dresden vs Zombies... what more could I say to hook you? Go for it! :-)
Read more
Helpful
Report abuse

Kindle Customer
5.0 out of 5 stars Halloween is awesome
Reviewed in Australia on 9 May 2019
Verified Purchase
Vampires, black mail and dark decisions for all the right reasons. Harry is true to himself and the loyalty to his friends and from his friends makes great reading.
Read more
Helpful
Report abuse

Amazon Customer
5.0 out of 5 stars Saving Chicago in Dresden style
Reviewed in Australia on 7 July 2017
Verified Purchase
Amazing thrilling action but hilarious all the time.
A great read and a worthy story for the ages.
Specially liked the dinosaur
Thanks again wizard Dresden
Read more
Helpful
Report abuse

Adam Dixon
5.0 out of 5 stars Awesome book, highly reccomended.
Reviewed in Australia on 10 October 2014
Verified Purchase
Possibly one of my favourite books in the series. It opens up many doors down the track and adds a bunch of Metaplot.
Read more
Helpful
Report abuse

Amazon Customer
5.0 out of 5 stars Five Stars
Reviewed in Australia on 4 February 2016
Verified Purchase
So good the first time (borrowed from a friend), I bought my own copy to re-read.
Read more
Helpful
Report abuse
See all reviews

perfectly_calm
4.0 out of 5 stars Necromancers
Reviewed in the United Kingdom on 19 April 2015
Verified Purchase
Number 7 in the Dresden series -- at this point, anyone who's still reading these books should know the score.
Anyone jumping in at this point should stop and go back.
Having said that, the books still do the basic introductions for every recurring character and concept whenever the crop up, which is now getting a little tiring and I say that despite a two-year gap between reading Blood Rites and this.

This one starts with Harry -- same as ever Harry: sleep-deprived, gallant, chivalrous and ever on the verge of trouble -- living with his brother Thomas (see end of book 6) in his cramped apartment.

The main plot revolves around the arrival of a bunch of necromancers to Chicago, looking for a number of magical mcGuffins in order to become god-like and kick off world-ending-like problems.

A number of the usual supporting characters don't appear at all, or very little indeed -- notably Karrin Murphy (or any cop really) and Michael.
However Butters, the rarely-mentioned medical examiner, gets a much enlarged role here and he's great. A funny and talented, yet permanently terrified individual with a passion for polka.

Overall I think this is tied, with Summer Knight (#4), for my favourite so far in the series.

This is a very easy read; thrilling, well paced between the many action sequences and the "figure it out" sequences involving Bob and Butters. Harry's dog, whom I don't remember from earlier books, plays an ever-increasing "role" in the books which I like.
Plenty of pop-culture humour as usual, pretty sure this scored at least five out-loud laughs.

The sole over-arching storyline for the series is now Harry's "internal" battle with Lasciel, the fallen angel. This treads water a bit here, but does its job of maintaining that ever-present sense of doom for Harry's future.

Temple Phoenix
5.0 out of 5 stars Zombies Have Never Been So Much Fun
Reviewed in the United Kingdom on 28 November 2011
Verified Purchase
Harry Dresden's life is complicated enough on a normal weekday; imagine what he has to deal with on Halloween. Well, for a start, his sometime vampire nemesis Mavra is blackmailing him into finding a necromantic grimoire; the catch? Whoever gets the book will gain the power to become a dark god.

After a slightly lacklustre installment, Butcher is back firing on all cylinders, and it's a joy to read. The quest for the book allows Harry to do some good old-fashioned detecting, and pretty soon he realises that other interested parties are also after the same thing.

The adversaries in this case are pleasingly varied in their abilities, from the magical powerhouse Cowl to the body-hopping Corpsetaker and the zombie-commanding Grevane. Jim even manages to squeeze in an old enemy of Harry's, out for revenge.

As ever, the action setpieces are spectacular, including an early chase sequence at the morgue and a thrilling zombie siege where Harry should feel most safe. Butcher saves the best till last, though, with a climactic scene that has to be among the best I've read anywhere. I won't spol much, save to say it involves an army of the undead, several White Council wardens and Harry atop a most unconventionall steed...

The personal relationships between the characters aren't neglected by any means. Harry's newfound family member proves a staunch ally and equal annoyance, Billy and his friends make a guest appearance, and joy of joys, the hilarious Butters gets promoted to head sidekick for this book. Murphy's elsewhere during the story, but Harry has a chance at a connection with a comely and plucky bookstore assistant; I pretty much guarantee you won't see where THAT one is going.

The standard of quality of the Dresden Files tends to be so universally high that it's hard to choose between them, but Dead Beat stands as a crowning moment of awesome for the series thus far. Definitely a Halloween treat.
Read more
Report abuse

Sylje
5.0 out of 5 stars Magical!
Reviewed in the United Kingdom on 29 January 2013
Verified Purchase
Start with Book One - it's difficult to stop once you've been hooked by these books. I initially watched it as a series on television before progressing to reading the early books, and I'm disappointed that the series on TV didn't continue. I still see Harry as the actor who played him in the series, but this isn't a drawback to me, he was well cast. The later books are much darker than the early ones, but there is still humour in them. Hiding under the bed covers doesn't help when you're reading a book, so you'll have to find some other way to deal with the tension - it's definitely high octane drama from start to finish.
Read more
Report abuse

Chris L.
5.0 out of 5 stars I want more Sue!
Reviewed in the United Kingdom on 29 September 2019
Verified Purchase
This was the book most people discussing the Dresden Files must talk about when I see discussions about the series. I’m just worried that nothing after this can top it.

A good book. Some interesting character development for Harry. He gets to reevaluate his perspective on split of things and dabbles in some dark arts. Looking forward to seeing how things develop on the next book.
Read more
Report abuse

catlady66
5.0 out of 5 stars Yet another fantastic read
Reviewed in the United Kingdom on 30 August 2020
Verified Purchase
Loved it yet again great read action galore tension every thing u want in a good book is in this series of books 📚 if you havent already checked them out what you waiting for no time like the present cant wait to get reading the next one in this series great author
Read more
Report abuse
See all reviews