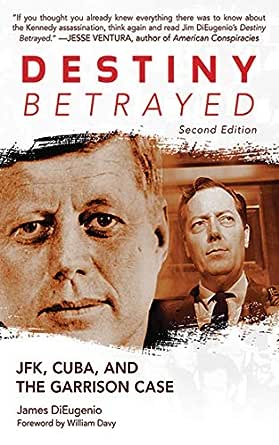 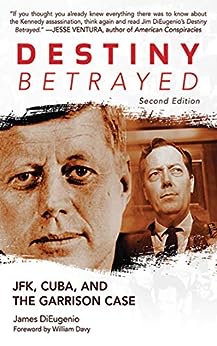 A worthy and logical response to . . . those who would destroy Jim Garrison's immense contribution to the truth--Oliver Stone

Aworthy and logical response to . . . those who would destroy Jim Garrison simmense contribution to the truth. --Oliver Stone --This text refers to an alternate kindle_edition edition.

James DiEugenio is cofounder of two organizations, the Citizens for Truth about the Kennedy Assassination and the Coalition on Political Assassinations. He was coeditor of The Assassinations, a book on the deaths of JFK, MLK, Robert Kennedy, and Malcolm X. --This text refers to an alternate kindle_edition edition.

4.6 out of 5 stars
4.6 out of 5
108 global ratings
How are ratings calculated?
To calculate the overall star rating and percentage breakdown by star, we don’t use a simple average. Instead, our system considers things like how recent a review is and if the reviewer bought the item on Amazon. It also analyses reviews to verify trustworthiness.

Mr PJ Carrick
4.0 out of 5 stars Excellent addition to Collection
Reviewed in the United Kingdom on 10 February 2020
Verified Purchase
I bought this book to be an addition to my well over 200 strong collection of books on the JFK assassination - I enjoyed the way it revisited the Garrison case and gave clear reasons why that was necessary.
I have one or two criticisms however - for any one not familiar with the case and the events, there are just too many names. As one other reviewer has suggested a "who's who" of the book would have been most helpful.
Secondly as an outside observer I find it just a wee bit hard to swallow the number of CIA/FBI journalists on the go - it seemed to me while reading the book that any journalist who agreed with the Warren Commission or was dismissive of Garrison did so because they were actually in the employ of, or were linked to the government agencies mentioned above. Really? - all of them
It was also a bit disappointing to encounter several occasions in the book when vital new ( at least new to me ) evidence arose but " has now disappeared". In particular I have to admit that I was not aware that Oswald had ( according to the book) named Ruby as a referee on a job application form. " Here it is" I thought - definitive proof of the connection between the two that has so often been suspected but denied by official reports. But - hold on - the document has " disappeared". As has various other tape recordings etc.
This is a great book - but for anyone thinking that this book (or any book) is going to "solve" the mystery or "present the whole truth" forget it. That is never going to happen and it is surely time to accept that.

MR DAVID ROMANS
5.0 out of 5 stars This book is essential to understanding the forces of the 'unspeakable'.
Reviewed in the United Kingdom on 10 February 2014
Verified Purchase
An essential reference in understanding the background and forces of 'unspeakable' evil that were deployed against Jim Garrison, the heroic DA of New Orleans who initiated the only prosecution against the traitors to America, and humanity who murdered John Kennedy. JFK saved all of us from the abyss of thermonuclear war on multiple occasions, not just during the cuban missile crisis. He was opposed by insane warmongers in the JCS and CIA, who have never been brought to account for their crimes against humanity. This book helps to correct the historical record.
Read more
3 people found this helpful
Report abuse

Buckers 61
4.0 out of 5 stars good.....but
Reviewed in the United Kingdom on 6 June 2013
Verified Purchase
I bought this as the revised version and unfortunately it's not. On the plus side, it's a well written treatise of the main conspiracy theories and is a good starting point for any student who wants to look beyond the Warren commission and the HSCA report.
Read more
Report abuse

keith mann
5.0 out of 5 stars excellent book
Reviewed in the United Kingdom on 2 January 2014
Verified Purchase
Extremely detailed and externally referenced. I found it hard work sometimes to follow but this does not detract from the tale it is telling, stick with it.

Strange that most of the "lone nut " views of this story don't bother with either of the above, i wonder why.
Read more
One person found this helpful
Report abuse

C. A. D.
5.0 out of 5 stars An amazing book.
Reviewed in Canada on 23 February 2016
Verified Purchase
Amazing book. Have been interested in the assassination of John Kennedy, Bobby Kennedy, and Martin Luther King for most of my life as I lived at that time. I was devastated when this took place, and I have some memories of things that were reported in our papers, we got the Toronto Telegram at that time, that never seemed to be reported on U.S. television, or are not mentioned now. I am seventy years of age but those murders are etched in my mind forever. I followed this purchase with the other book Dr. Mary's Monkey since it is connected to the John Kennedy murder. That spider web has many people involved, though I may not live long enough to see it made public. It seems that any of the people who are brave enough to try to make any of these things known get murdered also. Case in point, I was just listening to an old interview of Philip Marshall's on the book he wrote called the Big Bamboozle, and was thinking of buying it, and I didn't even realize he had been murdered also. Now with the U.S. elections taking place right now, and me up in Canada just watching this unfold on t.v., I am very afraid for the United States and the American people, and of course us up here in Canada as well, as we are so close to them. I fear for the rest of the world as well. What I thought at first going by just what I saw on t.v., is the complete opposite. It seems that those who I trusted are the truly evil ones, and every thing has been turned around ass backwards if you know what I mean.
Read more
One person found this helpful
Report abuse
See all reviews
Get FREE delivery with Amazon Prime
Prime members enjoy FREE Delivery and exclusive access to movies, TV shows, music, Kindle e-books, Twitch Prime, and more.
> Get Started
Back to top
Get to Know Us
Make Money with Us
Let Us Help You
And don't forget:
© 1996-2020, Amazon.com, Inc. or its affiliates