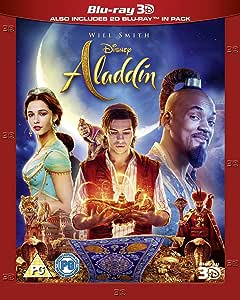 Guy Ritchie co-writes and directs this live-action fantasy adventure starring Mena Massoud, Naomi Scott and Will Smith.Street urchin Aladdin (Massoud) meets the beautiful Princess Jasmine of Agrabah (Scott) by chance in the marketplace after she sneaks out of the royal palace to walk among her people.The sultan's advisor, the evil Grand Vizier Jafar (Marwan Kenzari), who is plotting to rule the kingdom himself, senses Aladdin's attraction to the princess and promises to make him rich if he can first bring him a magical lamp containing a powerful Genie (Smith).After venturing into the Cave of Wonders in search of the lamp, Aladdin's quest to defeat Jafar and win the hand of the princess begins.

4.7 out of 5 stars
4.7 out of 5
3,491 global ratings
How are ratings calculated?
To calculate the overall star rating and percentage breakdown by star, we don’t use a simple average. Instead, our system considers things like how recent a review is and if the reviewer bought the item on Amazon. It also analyses reviews to verify trustworthiness.

kes
5.0 out of 5 stars Fantastic treat
Reviewed in the United Kingdom on 30 September 2019
Verified Purchase
one of my favourite Disney animated to love action adaptations! Jafar surprised me being so young, however he gave a strong performance, along with the rest of the cast. Costumes I found stunning particularly Jasmines dresses. The magic in the cave so many things provided a feast for the eyes. The adaptation did not loose the magic found in the animated version. Will Smith had a huge job to match Robin Williams performance, but he was great. Please please maintain this standard for the next adaptation released Disney!!! Highly recommend.
Read more
7 people found this helpful
Report abuse

Djilly L.
2.0 out of 5 stars Disney pickpocketed its own pocket
Reviewed in the United Kingdom on 20 November 2019
Verified Purchase
Disappointingly rather than providing more of a back story as Disney did with its brilliant Malficient live action movie, the Aladdin storyline is mostly as you would recall with a few deviations.
Most importantly now the main characters are replaced by actors that with the exception of Jasmine lack the strong and distinctive personalities as displayed in the animated classic. Worse, the chemistry between the characters just isn’t there. A few new songs are included that partly contribute to the 30 minutes of additional run time vs the original, but during that extra time your ears are treated on pretty bad singing.

What about the story? Well, Aladdin and Abu still live on the streets. Princess Jasmine, a palace resident forced to marry a prince runs into him. Jafar is obviously scheming. And genie pops up to assist Aladdin. Same old, same old. Jasmine however now has a handmaiden, to which Genie is attracted. The biggest issue overall, as I feared, is that it is hard for this movie to recreate the joy and the spark of the animated classic.

Oh sorry I can’t stand the fresh prince who is now in the role of genie and obviously struggles to replace Robin Williams. The worst is that some of his jokes were copy-pasted and simply don’t work here aside from the fact that his voice doesn’t lend its self for much else than hip hop from a musical perspective. And yes, there are the obligatory life lessons that can be found in every family movie these days – as if children can’t work out their own framework of values. Anyway by the end of the movie you will understand that you should not be seduced by power and wealth and just be yourself!

Not sure if this a great addition to Disney's growing live action library. Still, we bought it on Blu ray in the 3D version that has a sharp, colourful image. If anything the cinematics and scenery looks quite good.. but then again a FX and CGI are bit of a let-down, looking dated.

MT
2.0 out of 5 stars Pirates copy, beware!
Reviewed in the United Kingdom on 14 December 2019
Verified Purchase
It’s a pirates copy. We do not wish to own it and did not watch it although we have opened it. It’s not right that Amazon allowed it to be on sale here.
Read more

K. Pickering
5.0 out of 5 stars Will Smith is outstanding
Reviewed in the United Kingdom on 24 September 2019
Verified Purchase
Having seen the original with the great Robin Williams, a remake seemed like a terrible idea. This must surely be a flop.
To our surprise, this is a very funny and entertaining film in large part to the fantastic performance from Will Smith.

Not just a good remake, but a great film in it's own right.

Redders
5.0 out of 5 stars A diamond in the rough.
Reviewed in the United Kingdom on 5 July 2020
Verified Purchase
As always with Disney, a good entertaining well crafted film in 3D. We're lucky to have both an 'old' LG 3D tv and a more modern Epson 3D LCD projector to view our 3D collection.

It's so nice that there is still 'new' 3d material coming out. I'm a huge cinemagoer (well usually). I've always found 3D at the cinema a bit lacklustre. At home you can tweak it far easier and shockingly even in 1080 HD it's an experience that never fails to entertain. Decent sound also helps too.

Film enjoyment is a subjective affair. But, this film has flair, humour, spectacle, great sound and I know we'll return to watching this again.

Steve's top 3D tip for specatacle wearers for passive 3D? Buy polarised flipdown lenses. They weigh next to nothing and you don't have that awkwardness of wearing two pairs of specs.

Roll on holographic projection. I love the concept of VR for viewing (I do have a Samsung VR headset), but the whole affair is heavy, sweaty ,cumbersome and with my prescription a bit of a strain.

Keep the 3d coming. Wbought his on offer with the 'new' Lion King and are looking forward to watching that too.

We have an OLED tv and Disney + in 4k, but as super as that is..I do like the magic of 3D. Or perhaps I should, 'Let it Go' to quote a Disney staple?
Read more
Report abuse
See all reviews
Get FREE delivery with Amazon Prime
Prime members enjoy FREE Delivery and exclusive access to movies, TV shows, music, Kindle e-books, Twitch Prime, and more.
> Get Started
Back to top
Get to Know Us
Make Money with Us
Let Us Help You
And don't forget:
© 1996-2020, Amazon.com, Inc. or its affiliates