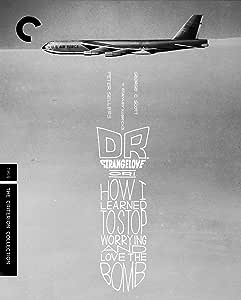 Dr. Strangelove, Or: How I Learned to Stop Worrying and Love the Bomb (The Criterion Collection) [Blu-ray]

Stanley Kubrick s painfully funny take on Cold War anxiety is without a doubt one of the fiercest satires of human folly ever to come out of Hollywood. The matchless shape-shifter Peter Sellers (The Pink Panther) plays three wildly different roles: Air Force Captain Lionel Mandrake, timidly trying to stop a nuclear attack on the USSR ordered by an unbalanced general (The Killing s Sterling Hayden); the ineffectual and perpetually dumbfounded President Merkin Muffley, who must deliver the very bad news to the Soviet premier; and the titular Strangelove himself, a wheelchair-bound presidential adviser with a Nazi past. Finding improbable hilarity in nearly every unimaginable scenario, Dr. Strangelove, or: How I Learned to Stop Worrying and Love the Bomb is a genuinely subversive masterpiece that officially announced Kubrick as an unparalleled stylist and pitch-black ironist.

BLU-RAY SPECIAL EDITION FEATURES
- Restored 4K digital transfer, with uncompressed monaural soundtrack
- Alternate 5.1 surround soundtrack
- New interviews with Stanley Kubrick scholars Mick Broderick and Rodney Hill; archivist Richard Daniels; cinematographer and camera innovator Joe Dunton; camera operator Kelvin Pike; and David George, son of Peter George, on whose novel Red Alert the film is based
- Excerpts from a 1965 audio interview with Kubrick, conducted by Jeremy Bernstein
- Four short documentaries from 2000, about the making of the film, the sociopolitical climate of the period, the work of actor Peter Sellers, and the artistry of Kubrick
- Interviews from 1963 with Sellers and actor George C. Scott
- Excerpt from a 1980 interview with Sellers from NBC s Today show
- Trailer
- PLUS: An essay by scholar David Bromwich and a 1962 article by screenwriter Terry Southern on the making of the film

Page 1 of 1 Start overPage 1 of 1
Previous page
Next page
Get FREE delivery with Amazon Prime
Prime members enjoy FREE Delivery and exclusive access to movies, TV shows, music, Kindle e-books, Twitch Prime, and more.
> Get Started
Back to top
Get to Know Us
Make Money with Us
Let Us Help You
And don't forget:
© 1996-2020, Amazon.com, Inc. or its affiliates