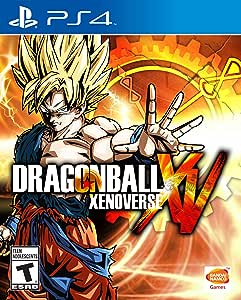 Brand: BANDAI NAMCO Entertainment
Platform : PlayStation 4
4.5 out of 5 stars 915 ratings
Usually dispatched within 4 to 5 days.
Ships from and sold by Ookinimaido Japan.

Fierce battles of Goku and others will be reborn! For the first time ever, the Dragon Ball universe will be depicted onto the new generation systems and will fully benefit from the most powerful consoles ever created. DRAGON BALL XENOVERSE will bring all the frenzied battles between Goku and his most fierce enemies, such as Vegeta, Frieza, Cell and much more, with new gameplay design! DRAGON BALL XENOVERSE will take the beloved universe from series' creator Akira Toriyama by storm and break tradition with a new world setup, a mysterious city and other amazing features to be announced in the future! But a question remains; an unknown fighter appears... Who is he?!

4.5 out of 5 stars
4.5 out of 5
915 global ratings
How are ratings calculated?
To calculate the overall star rating and percentage breakdown by star, we don’t use a simple average. Instead, our system considers things like how recent a review is and if the reviewer bought the item on Amazon. It also analyses reviews to verify trustworthiness.

Jules
4.0 out of 5 stars A Breath of Fresh Air
Reviewed in Canada on 28 August 2015
Verified Purchase
Let me just start by saying the last DBZ game I played was Raging Blast. Why? Because by that point, personally, I was exhausted with doing the same story missions and whatnot over and over and over again. I know I'm not the only one who felt that way. I'd owned every game since the first Budokai game, and every year I'd play the same story again. It just gets tiresome.
So after skipping Raging Blast 2, Ultimate Tenkaichi, Battle of Z and the Budokai HD Collection (though I may pick that one up yet), Xenoverse finally caught my eye. Why? Because it was trying something new. The game takes a lot of influence from the now offline MMO, Dragon Ball Online.

The story is a breath of fresh air to say the least. You play as the newest member of the Time Patrol who works to keep the history of the world in check. When history begins to change, it becomes your job to go back in time and fix it. This means popping in on some of the most iconic battles from the series and helping steer the situation back into the direction that it is supposed to take, thus restoring order to history.
It's kind of like a big "What-If" saga.
Could they have done more with the story? Sure. But the fact alone that you get to make your own character and insert yourself into the Dragon Ball world is worthwhile enough.

Which brings me to the character creator. Character creation is awesome. Could it be deeper? Oh, yes. As far as I'm concerned, when it comes to a character creator, you can never have too much depth. But for a first attempt, it's great and it'll most likely fulfill a childhood dream of yours. You can choose between five races and then choose your gender (except for Namekians and Frieza's race). Different races have different stats (ie. Saiyans have higher attack power, but lower health) as do the different genders.
You then name your character and pick his/her voice out of a surprisingly large list. Your character really doesn't have any speaking lies, aside from when you're in combat and he/she makes the usual grunts and screams that are staples in the DB series.
You can then deck out your warrior in all sorts of different armour and accessories. But the issue with the armour is that every piece has stats set to it. It kind of sucks when you like your character in a certain outfit but that outfit doesn't compliment your character's specific build or that outfit has crappy stats. Also, you can preview the armour before you buy it, so sometimes it's kind of like buying a blind box toy or something.

What about the combat? I like it. It's not a deep fighting game at all. It reminds me more of the Budokai Tenkaichi games in that sense. It's flashy and it captures the feeling of the anime, but it's not like Street Fighter or anything. If you're a fighting game fan and you're just looking for a new game to pick up, this isn't for you. It's easy to kind of get into it and kick some tail. After you start to acquire new and different skills (because the ones you start with kind of suck), you really begin to feel that your character is YOUR character and that you're stringing together your own combos. So that's neat.
Some of the controls made me scratch my head a bit (ie. to fly down, you have to click L3), I was okay with combat. Sometimes the lock-on system ticked me off when I was fighting multiple enemies because it would switch between my foes constantly, making it difficult to focus on who I wanted to fight.

There's no way to access a the modes right from the start screen. So if you and your friends want to play a few rounds of local multiplayer. You have to enter Toki Toki City, walk your character to the offline matches counter and go from there. Would it have been so hard to have been able to quickly access this from the main title screen? I don't see how they could have overlooked that. But that's just a minor nitpick.

Another dislike I have is the RNG. What's RNG? Random Number Generator. Basically you have loot drops during Parallel Quests and they're completely random and you just have to hope you'll get the items you need, but a lot of the time you won't so you have to do the quest again. It's really out of place here and it makes the whole game very grind-heavy at times. It may even kill the game for you, I don't know.

Overall, is this a perfect game? Oh god no. It's obvious that Dimps has never done a game like this before, but it's not a bad first attempt. It's a flawed game, but it's still a worthwhile game if you're a fan and I think it lays down a solid foundation for a sequel to bring about improvements. If you aren't a fan or you aren't familiar with the series, just stay away. I hope we get to see Xenoverse 2 one day and it goes a little deeper with the story.
Read more
2 people found this helpful
Report abuse

Jared A. Oscroft
4.0 out of 5 stars A Dragon Ball game.
Reviewed in Canada on 2 March 2016
Verified Purchase
Pretty fun game, but more fun with others of course. The games case was a little scratched up as if placed on a shelf and pulled off the shelf repetitively, and there was a small indentation on the front cover, but the disc is in perfect shape and with no problems besides those. I gave this 4/5 stars because of the reasons given. I would have given it 5/5 stars if it came in perfect condition like seen on store shelves behind glass, and if the game was more than a Dragon Ball game, but it is what I expected and no less. Given the ability to create your own character from a handful of races with different attributes, and then train under mentors from the series to gain their abilities for your own is a lovely treat to experience for any Dragon Ball series fan, but I would pick this one up during a sale preferably, either at your local game store or on the Playstation network or XBox live.
Read more
Report abuse