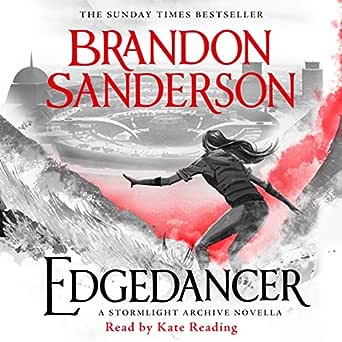 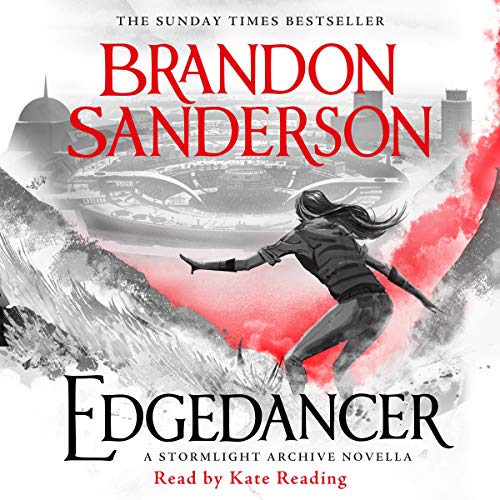 4.7 out of 5 stars
4.7 out of 5
2,728 global ratings
How are ratings calculated?
To calculate the overall star rating and percentage breakdown by star, we don’t use a simple average. Instead, our system considers things like how recent a review is and if the reviewer bought the item on Amazon. It also analyses reviews to verify trustworthiness.

Ryan
5.0 out of 5 stars A beautiful short story to provide background on some big name characters
Reviewed in Australia on 28 November 2020
Verified Purchase
Lift is easily one of my favourite characters in this series and you can tell that Sanderson loves writing for her. This book has plenty of laughs, lots of drama and provides awesome back story for a character I can tell I will love in stories to come.
Read more
Helpful
Report abuse

Daniel
5.0 out of 5 stars Amazing
Reviewed in Australia on 5 June 2019
Verified Purchase
Once again Sanderson proves why his the king of fantasy fiction right now the books a great addition to the series. Bring on the rest I know his working at it. Storm light is a amazing series.
Read more
Helpful
Report abuse

F_Waylander
4.0 out of 5 stars Light hearted tone
Reviewed in Australia on 27 November 2018
Verified Purchase
Between Words of Radiance and Oathbringer, this novella is a change of pace as it turns its spotlight solely on Lift. I found myself chuckling at some of the narratives - starvin' good read.
Read more
Helpful
Report abuse

Amazon Customer
1.0 out of 5 stars Mate never buy anothet one of your books
Reviewed in Australia on 23 July 2019
Verified Purchase
What a ripoff. Once burned never go back. Dosn"t go anywhere. You or yours simply did this as a money exercise.
Read more
Helpful
Report abuse

Greg W
4.0 out of 5 stars A new beginning.
Reviewed in Australia on 21 February 2019
Verified Purchase
Love this new character. and her attitude to life . Well written as is to be expected from Brandon Sanderson.
Read more
Helpful
Report abuse

E. A. Solinas
TOP 500 REVIEWER
4.0 out of 5 stars “It’s everyone else that’s weird.”
Reviewed in Australia on 27 February 2018
WARNING: This novella has already been published in the collection "Arcanum Unbounded," so don't buy if you already own that book.

One of the most interesting characters in the Stormlight Archive series is Lift, a girl who is exactly what you wouldn't expect in a powerful knight -- a quirky teenage urchin who eschews shoes, eats a lot and is accompanied everywhere by a talking vine. But she's exactly the kind of character that you'd expect Brandon Sanderson to devote an entire novella to, which is why we got "Edgedancer," a little spinoff novel that follows Lift on her own side-adventure.

Much to Wyndle's dismay, Lift is feeling stifled by palace life and decides to run away before she's changed too much by the experience. So she heads to Yeddaw, a strange city with "really awesome pancakes"... and Darkness, the Shardbearer who has already tried to kill her. Of course, being Lift, she causes quite a bit of mayhem in this new city as she defies the guards and clashes with the twiggy owner of an orphanage, all in the hopes of attracting her enemy's attention. She's deduced that Darkness is after someone else with powers in Yeddaw.

And she turns out to be right, as she overhears that Darkness and his cronies are planning to kill another Radiant somewhere in the city -- someone with superhuman powers -- and Darkness is planning to dispose of Lift himself. Her only plan for saving the other Radiant is to try to find something weird that can be tracked down to a particular person. But as an Everstorm approaches and the assassins close in on the Radiant, it may be difficult to save them without ending up at the business end of a Shardblade herself.

"Edgedancer" is rather different from the other Stormlight Archive books -- it focuses almost entirely on Lift rather than the other characters we know and love, and the conflict is relatively small-scale despite the expansive universe it takes place in. It's a little story in a big world, and Sanderson knows how to spin up a relatively simple tale with plenty of rich cultural and magical details, as well as the feeling that a bigger storm than the Everstorm is coming.

As always, Sanderson's writing is smooth and rich ("They looked like twisted, broken bodies in the gloom"), but with quirky edges that keep it from ever feeling pompous ("Those were only slightly better than gruel, which was only slightly better than cold socks"). The novella can switch smoothly from comedy (Lift's quest for pancakes) to an eerie kind of horror (most scenes with Darkness) very easily, but the middle section kind of spins its wheels, and the identity of the Radiant is kind of obvious.

Lift.... is Lift. She doesn't see the point of money, hates dreams, and swims through entire wagons full of grain before stuffing herself with pancakes. But Sanderson never lets her eccentricities take over the core of her character, which has a reluctant heroism that she seems almost to be afraid of -- she's a creature that desperately doesn't want to change or be bound to anything against her will, yet it's happening to her whether she likes it or not. There's also Wyndle, her plaintive little sidekick who struggles to deal with whatever weird ideas she's gotten.

"Edgedancer" is a solid little accompaniment to the Stormlight Archive books -- not particularly complex, but a straightforward little tale of Radiants, powers, and assassins. Better than pancakes.
Read more
4 people found this helpful
Helpful
Report abuse

Susu
TOP 1000 REVIEWER
2.0 out of 5 stars Glad I borrowed this book from the library
Reviewed in Australia on 22 November 2020
Just okay. Didn't love any of the characters. Very long prologue is repeated word for word from Words of Radiance. And the book didn't seem to have much of a plot. Would have been better incorporated into WoR or Oathbreaker.
Read more
Helpful
Report abuse
See all reviews

paul catt
1.0 out of 5 stars do not buy
Reviewed in the United Kingdom on 4 November 2018
Verified Purchase
I don't normally write reviews , but though this needed to be said even though this book is a very good read the price to download is very expensive and you can buy it alot cheaper if you buy the collection of short stories Arcanum Unbounded which you will get other stories as well as Edgedancer!!
Read more
72 people found this helpful
Report abuse

Alaran
4.0 out of 5 stars An enjoyable bonus to 'The Stormlight Archive'
Reviewed in the United Kingdom on 5 January 2018
Verified Purchase
Forming part of ‘The Stormlight Archive’ series, ‘Edgedancer’ predominantly takes place between ‘Words of Radiance’ and ‘Oathbringer’. It focusses upon the character of Lift who previously only appeared briefly in ‘Words of Radiance’ during one of the interludes that regularly take place within the structure of ‘The Stormlight Archive’. That same interlude is reused as a fifty or so page prologue to this novella. Before being published as its own volume the novella previously appeared in ‘Arcanum Unbounded’, a collection of short stories and various works that take place within Sanderson’s Cosmere universe.

Being about a young girl (of slightly indeterminate age due to her belief that she has stopped growing older) the story has, perhaps, a slightly less mature tone than usual for ‘The Stormlight Archive’. But this is understandable due to Lift’s age, her generally light-hearted attitude and her tendency to be preoccupied with food. The character of Lift also has enough zany charm to comfortably carry the story.

The story sees Lift travel to the city of Yeddaw (an area of the world of Roshar not yet covered in the other books of ‘The Stormlight Archive’), ostensibly she claims to eat pancakes but with the motive of learning more about Darkness, her nemesis from her appearance in ‘Words of Radiance’ and this book’s prologue. In between the consumption of pancakes Lift begins to learn more about her relationship with Wyndle and her powers (or awesomeness, according to her). It is this element that starts to link Lift more with the events of the other books of ‘The Stormlight Archive’.

As such, ‘Edgedancer’ shouldn’t be read before reading both ‘The Way of Kings’ or ‘Words of Radiance’ as events in this novella are, in several ways, a result of the fallout from the final stages of ‘Words of Radiance’. There are also some important elements that promise to have a bearing on ‘Oathbringer’.

Therefore, ‘Edgedancer’ is a welcome addition to ‘The Stormlight Archive’ in that it enriches the world and looks at the return of the Knights Radiant from another perspective. It will be interesting to see how Lift and Darkness are amalgamated into the main storyline.
Read more
21 people found this helpful
Report abuse

K. G. A. Alavi
4.0 out of 5 stars All figured out
Reviewed in the United Kingdom on 4 December 2020
Verified Purchase
I think thus is a bit of a double edged sword as I got this book as a kind of introduction in to Stormlight Archives. In that I got what I what I wanted but because the is book 2.5 I know I am missing a lot of history.

A good book (from the acknowledgments page) was made to fill in the gaps between books 2 and 3. So if anyone did notice a big change on a character in book 3, they will probobly find the answer here.

I like Lift's character. I like the leaf in the wind approach she takes to life. Her also being very young probobly fuels this. I also like that she has a code she sticks to. She does it instinctively (probobly without even realising she is doing it), her being the focus of this story probobly will pay dividends later on. My problem with the book is Lift seem hopelessly over matched through out the whole book.

This book has wet my appetite to read more of the series. So I definitely look forward to see how Lift develops later on. As well as what adventures and other characters are there.
Read more
2 people found this helpful
Report abuse

Katharine Paterson
3.0 out of 5 stars Prologue (22% of book) is copied from a previous book!
Reviewed in the United Kingdom on 19 October 2018
Verified Purchase
I have really enjoyed all the previous books in this series, so was really looking forward to this. Started reading the Prologue and thought, this sounds familiar, maybe it was just me, but as I read on I realised that the whole prologue (22%) of this book looks like it has been taken entirely from a passage about "Lift" in one of the previous books!

I have to say I think that is very cheeky, wouldn't have minded if it didn't take up so much of the whole book.
Read more
6 people found this helpful
Report abuse

Mike
5.0 out of 5 stars Read it after “Words of Radiance”
Reviewed in the United Kingdom on 22 February 2021
Verified Purchase
This book is an enjoyable interlude in the epic novels that makes up The Stormlight Archive. It is quite short compared to The Way of Kings etc and I look forward to encountering Lift again in his later books. Everything about these books is just on an epic scale (although I do wish they could be a bit shorter!).
Read more
Report abuse
See all reviews
Back to top
Get to Know Us
Make Money with Us
Let Us Help You
And don't forget:
© 1996-2021, Amazon.com, Inc. or its affiliates