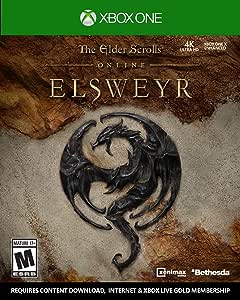 The Elder Scrolls Online: Elsweyr for Xbox One

The Elder Scrolls Online: Elsweyr for Xbox One

Join over 11 million players in the award-winning online multiplayer RPG. Dragons have invaded Tamriel in The Elder Scrolls Online: Elsweyr, part of the Season of the Dragon year-long adventure! Explore and defend the home of the Khajiit from an ancient evil, and command the undead with the Necromancer class.

4.4 out of 5 stars
4.4 out of 5
113 global ratings
How are ratings calculated?
To calculate the overall star rating and percentage breakdown by star, we don’t use a simple average. Instead, our system considers things like how recent a review is and if the reviewer bought the item on Amazon. It also analyses reviews to verify trustworthiness.

I Just Know
1.0 out of 5 stars No codes included, disc useless
Reviewed in the United States on 17 July 2019
Platform: Xbox OneEdition: StandardVerified Purchase
I recieved this opened with no code sheets. Codes are required to play this game and come included as stated on the back of the case. The disc alone (which is what I received under the pretenses of this being a new released game) is useless. Returned to say the least.
Read more
10 people found this helpful
Report abuse

Caprisun_Calamity27
3.0 out of 5 stars Good deal is bought around 30$
Reviewed in the United States on 17 December 2019
Platform: Xbox OneEdition: StandardVerified Purchase
Bought the expansion to explore more and finish some quest lines, comes w both the sommerset and morrowwind expansions. This only covers northern elsweyr, southern elsweyr needs to be purchased separately from crown store or through eso plus subscription which is alittle ridiculous. Visually, very beautiful. Gameplay for northern elsweyr, short.
Note, the potential 100gb storage need is only if you do not have eso already downloaded/installed! Roughly 30mb for installation of all three expansion packs; elsweyr, sommerset, and morrowind.
Read more
4 people found this helpful
Report abuse

Kayaking Source
5.0 out of 5 stars I need help now that I have this game..
Reviewed in the United States on 14 December 2019
Platform: Xbox OneEdition: StandardVerified Purchase
Purchased this for my wife and now she cant get off the game. Great game but can someone come clean my house now??
Read more
7 people found this helpful
Report abuse

Raymond H. Ditto
1.0 out of 5 stars Good ESO expansion. Never got pre-order content. Horrible customer support experience. Returned.
Reviewed in the United States on 4 November 2019
Platform: Xbox OneEdition: StandardVerified Purchase
I am a bit 'late' with this review, but with good reason.

Now for the ugly side of the review.

See that bit about pre-ordering the game? I never got the preorder "bonus in-game content" (or "Pre-purchase rewards" as the official ESO site calls them)

Amazon Customer Support was an unexpected nightmare... Never have I been left felt so stressed out and frustrated, and even slightly insulted. Many failed attempts that went nowhere. In many cases, I felt like I was dealing with some outsourced overseas call center using out of date cheat sheets, with no real clue of what they were providing customer service for. To many people of little to no help, or that were utterly clueless. To little that could be done by those few who did try to help. I at one point rejected an attempt to placate me with $10 credit as an 'apology', which I rejected, since it did not involve fixing the problem.
The only usable piece of advice I got, as an unhappy customer, to return it for a full refund. Which I did.

With enjoying ESO Elsweyr so much, the moment I got the refund money, I immediately went out and bought it again, from a different retailer.

In the past, such an issue was simply resolved by requesting the bonus code be re-sent. In this case, it almost seems such a code (and even knowledge of the preorder bonus content existing) simply did not exist in their system.

It's odd. Those rare times I see someone with that bonus pet or bonus outfit, I get upset again. Of thinking "Oh look, there is one of those pre-order bonus things that I never got with my pre-order."
<sarcasm>Thanks for about ruining my gaming/shopping experience, Amazon. </sarcasm>
Read more
2 people found this helpful
Report abuse
See all reviews
Get FREE delivery with Amazon Prime
Prime members enjoy FREE Delivery and exclusive access to movies, TV shows, music, Kindle e-books, Twitch Prime, and more.
> Get Started
Back to top
Get to Know Us
Make Money with Us
Let Us Help You
And don't forget:
© 1996-2020, Amazon.com, Inc. or its affiliates