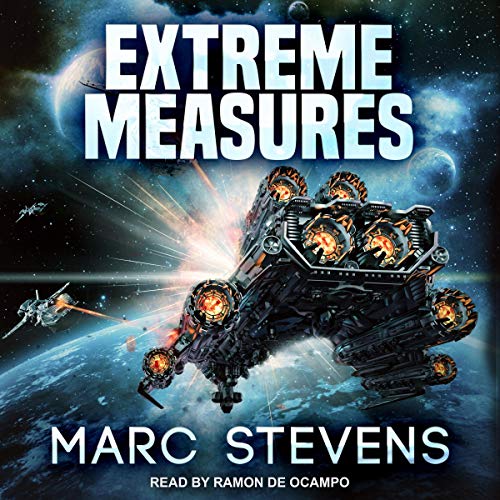 Nathan Myers and the crew of the Legacy have been taking down some of the galaxy's worst criminals. The corrupt leaders that are hiding in the shadows have taken notice. They are combining forces and sharing technology, even resorting to acts of terrorism in hopes of putting a stop to Nathan's conquests. If the face of growing opposition, Nathan and his allies discover an even deadlier threat. The Prule that have been hiding in the galaxy for more than 200 years have suddenly come out of hiding. They have gathered a fleet to protect a secret that no one was supposed to uncover. The crew of the Legacy, and Nathan's closest allies, will be forced to take extreme measures to stop them, no matter the cost.

4.7 out of 5 stars
4.7 out of 5
243 global ratings
How are ratings calculated?
To calculate the overall star rating and percentage breakdown by star, we don’t use a simple average. Instead, our system considers things like how recent a review is and if the reviewer bought the item on Amazon. It also analyses reviews to verify trustworthiness.

Warwick
5.0 out of 5 stars A great read
Reviewed in Australia on 3 October 2020
I have thoroughly enjoyed the series so far and I will be buying the next installment when it comes available for purchase.I recommend this series to all who enjoy this genre.keep up the good work Marc
Read more
Helpful
Report abuse
See all reviews

I. Rankin
5.0 out of 5 stars Explosive action
Reviewed in the United Kingdom on 3 May 2020
Verified Purchase
Non stop from start to finish, best book of the series so far, all the characters are real and the action non stop, can’t wait for the next book Marc Stevens is a fantastic author with a very imaginative line in heroes fighting for justice against this galaxy,s greed and andromeda galaxy,s hateful hordes, brilliant writing
Read more
Report abuse

Billy
5.0 out of 5 stars Impatiently awaiting next book, 50 of 5 stars for the series
Reviewed in the United States on 24 July 2020
Verified Purchase
I'm going to give a rating of 50. Read the whole series in four days, needless to say I will have extra chores to have to make up for. I wish it was I that could find a ship, I love these kind of books.I have read the Sakira series And the I am bob or bobiverse series and a couple more that I would recommend but cannot since I would have to close out and look up.
Read more
2 people found this helpful
Report abuse

Book Junkie, MD
4.0 out of 5 stars Dude. Learn how to use a comma
Reviewed in the United States on 22 January 2022
Verified Purchase
I really love the series. The characters are unique and the plots always keep me guessing. I read the first three books in 3 days. I highly recommend the series and I am a huge fan.

Unfortunately, book four is desperately in need of an editor. The constant misuse of the comma makes every paragraph a chore. The stories are fantastic and could be on the top of the charts with a bit of proofreading.
Read more
Report abuse

Amazon Customer
4.0 out of 5 stars fun story
Reviewed in the United States on 13 July 2021
Verified Purchase
I like the series a bunch especially the lack of filler and the fact that the main characters get a lot done in these books but the dialog is just terrible, stilted and unrealistic. I think the idea is to have everyone sound like they are in the military and try to have all their conversations be efficient or something like that as the chats are even more jarring in what should be a relaxed atmosphere and situation.
Read more
Report abuse

jody
5.0 out of 5 stars a nice series
Reviewed in the United States on 19 November 2021
Verified Purchase
This is the fourth book in this series. It has interesting characters as well as lots of action and intrigue. See what an earth man will do to survive in a hostile universe. Will Nathan and his crew change or will he try to make the universe change?
Read more
Report abuse
See all reviews