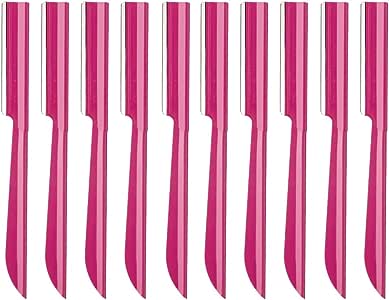 Amazing product:
If you are someone who knows how to use eyebrow razor , you will find out how amazing this product is. I'm sure you will love it.
ATTENTION PLEASE: Our eyebrow razor is sharp, Please use it carefully.

*Trim the fine hairs of the eyebrow, neck and face as well as unnecessary hairs elsewhere.

*Streamlined handle with comfortable grip. Before use, please apply moisturizer or water to moisturize the skin.

*After use, please carefully clean the blade and dry to save.

【WARRANTY】Miss Gorgeous offers a 100% satisfaction guarantee. If you are not satisfied with our product, please feel free to contact us. We will either refund your money or redeliver a new product.

Ella
4.0 out of 5 stars Very good
Reviewed in the United Kingdom on 11 April 2020
Colour: redVerified Purchase
Nice product, I really like it
Read more
37 people found this helpful
Helpful
Sending feedback...
Thank you for your feedback.
Sorry, we failed to record your vote. Please try again
Report abuse

kelly wilson
5.0 out of 5 stars Amazing
Reviewed in the United Kingdom on 6 April 2020
Colour: redVerified Purchase
Amazing! I will never go back to the cheaper ones againe. I like that it's a smoothe straight edge instead of the serrated cheaper ones.
Read more
32 people found this helpful
Helpful
Sending feedback...
Thank you for your feedback.
Sorry, we failed to record your vote. Please try again
Report abuse

Farr
5.0 out of 5 stars Love them
Reviewed in the United Kingdom on 16 March 2019
Colour: redVerified Purchase
Very sharp which I wanted, love them!
Read more
37 people found this helpful
Helpful
Sending feedback...
Thank you for your feedback.
Sorry, we failed to record your vote. Please try again
Report abuse

Oana Madalina
5.0 out of 5 stars Blade every good!
Reviewed in the United Kingdom on 16 November 2018
Colour: redVerified Purchase
This razors are very good! Helps me very much! Is easy to handle them in your hand.
I like them! I recommend!

Amazon Customer
5.0 out of 5 stars Perfect for irritating small hairs!
Reviewed in the United Kingdom on 17 April 2018
Colour: redVerified Purchase
Fastastic products! It is perfect for removing irritating small hairs. Very easy to use and there are 10 razors in the pack so this will last me forever.
I would recommend it to everyone.

Dua'a Zawawi
5.0 out of 5 stars Great but extremely sharp
Reviewed in the United Kingdom on 16 May 2020
Colour: redVerified Purchase
You need to be extra careful when using these. The great thing about them is that they're made of steel and very sharp so they shave unwanted facial hair from on pass. You'd want to hold the blade at an angle that's almost parallel to your face to avoid cutting yourself (as I have, unfortunately). And move carefully and slowly. These will last me for a very long time and if I have to replace them, I can recycle them. The protective cap is the only part made of plastic and I think it's recyclable becasue it's not some flimsy plastic.
Read more
One person found this helpful
Helpful
Sending feedback...
Thank you for your feedback.
Sorry, we failed to record your vote. Please try again
Report abuse

Alycia
5.0 out of 5 stars Soooo perfect
Reviewed in Canada on 30 April 2019
Colour: redVerified Purchase
I love these things. SO much better than the twinkle type ones with the scratchy blade guards.

However. They are super sharp! I read the previous reviews, so it was expected. However, I got halfway through without incident and got cocky. Then I cut right above my eyebrow😂 nothing big, just a little nick. But respect the blade! Lol

Was extremely nervous to use one at first even though I’m old enough to have been taught to shave a patient for pre-op with a real old fashioned straight razor which is all the rage now! Full circle. Lol! Well, at least I’ve got steri strips and I know the number of the Plastics that’s on call so, let’s do it!

Firstly, WATCH A BUNCH OF YOU TUBE VIDS FIRST!! If you’ve never used or been truly trained on the use of a REAL STRAIGHT RAZOR, YOU MUST WATCH YOU TUBE VIDS or you’re asking for sutures (stitches) trust me! These are NOT the Revlon ones you get from the drug store! These are the big guns short of the flip part of a real straight razor!

Secondly, if you have acne, no, no, no. Go find an actual pro to do your face the first time because there are some types of acne that should NOT be shaved and a true Pro will know. If you proceed anyway, you could be looking at permanent scars or making your acne worse by spreading bacteria all over your face. This is definitely NOT for everyone and a Pro will tell you that. I actually had a dermatologist tell me that this is a crazy new fad and he hopes it dies out fast because kids are doing serious damage. I never said a word LOL, I’m just doing ME! I’m not starting a secret biz in my basement!

Third, clean and sanitize REALLY WELL BEFORE bringing that near your face! You thought I meant the razor, of did you think your face? Well, the answer is BOTH!!

I’ve watched several tutorials and most of them use an oil, some kind of facial oil and it appears to make quite a difference in how smooth the shave goes, no “snagging” if that makes sense? The oil allows the blade to just glide. Like I said, watch those YTs! It’s amazing to see! There’s one where it’s a guy that owns the shop and he looks like a long haired Shaggy from Scooby Doo but dresses like he’s off to a Skateboard comp! He’s awesome!
The amount of hair he took off this young girls face was crazy! Her skin was flawless but she didn’t look like she had any hair and 15 min later you could have knitted a sweater out of what came off her face!! She was amazed, so was I!!

So.....break out the isopropyl alcohol (70% or higher) and after washing face and soaking blade in isopropyl I wiped my face with isopropyl and then used one of my amazing face oils from Kiehl’s and off I went....I used my 10x lighted mirror and after I calmed my nerves and my shaking hands, off I went.

I have NO IDEA HOW MEN DO THIS DAILY! Respect! There are more crevices and curves and you need three hands to pull your skin taught and shave but.....I DID IT! It took me an HOUR AND A HALF but I did it! And I did a darn fine job if I do say so myself! I’ll be honest though...it’s a MILLION times easier to do that on someone else’s body (we weren’t taught to shave JUST faces....erhem.....

So...warning or rather IMO, don’t wear makeup for the rest of the day and just let your skin breath! It feels amazing and I’d do it weekly if I could but currently I don’t have an hour and a half to pamper myself as others come first in my priority list, shaving my face just isn’t up there right now. Hopefully soon!

Moving forward, yes I’d do it again but if it’s cost effective and I can find a guy the caliber of what I saw on YT, I’d pay for it as I don’t know if I’ll ever get THAT good and yes, practice makes perfect but later. I can 💯% say that I wouldn’t do it with ANY other face blade than these!! Yes, they REALLY ARE THAT GREAT! And....I’d like to think I’m allowed a professional opinion ;)

Be careful with them and put the guard back on after you clean it and make sure it’s dry or I would think it will rust?
Regardless you have a whole pack to practice with, start on your arm.
I love the weight of the handle and of course....they’re PINK so that’s SIX stars! Seven, they work THAT well!

Andrea Senior
5.0 out of 5 stars Best dermaplaning of my life
Reviewed in Canada on 13 December 2019
Colour: redVerified Purchase
I got the best dermaplaning of my life with these. My skin was silky smooth after and my skincare products sank in like a dream. I actually see bigger results with my skin care products when I do this once a week. If you're also looking for your foundation to apply evenly on the skin without any peach fuzz, give it a go! If your a makeup artist keep one of these in your kit for your clients or model or actor the camera picks everything up. Happy shaving xo
Read more
2 people found this helpful
Helpful
Sending feedback...
Thank you for your feedback.
Sorry, we failed to record your vote. Please try again
Report abuse

cando
5.0 out of 5 stars EXCELLENT for the experienced dermaplaner.
Reviewed in Canada on 30 April 2020
Colour: redVerified Purchase
These are SHARP so if you're inexperienced be ultra cautious. They are on the level of a scalpel in terms of sharpness. I graduated up to these after using the Schick blades for several months (which work great also). The blade handles are also steel and they seem to stay sharp for a good amount of time...I opened my pack of blades about 2 months ago and I'm still using the first blade due to the fact that it's still very sharp.
Read more
Helpful
Sending feedback...
Thank you for your feedback.
Sorry, we failed to record your vote. Please try again
Report abuse

Abhishek Kaushal
3.0 out of 5 stars Razors
Reviewed in Canada on 5 December 2018
Colour: redVerified Purchase
These Are good but very very cautiously u need it use it since it’s very sharp - have cut my face twice ! All I feel that it doesn’t remove hair very finely - it still leaves residual which is small hair - so cant say wow about it !!
Read more
2 people found this helpful
Helpful
Sending feedback...
Thank you for your feedback.
Sorry, we failed to record your vote. Please try again
Report abuse